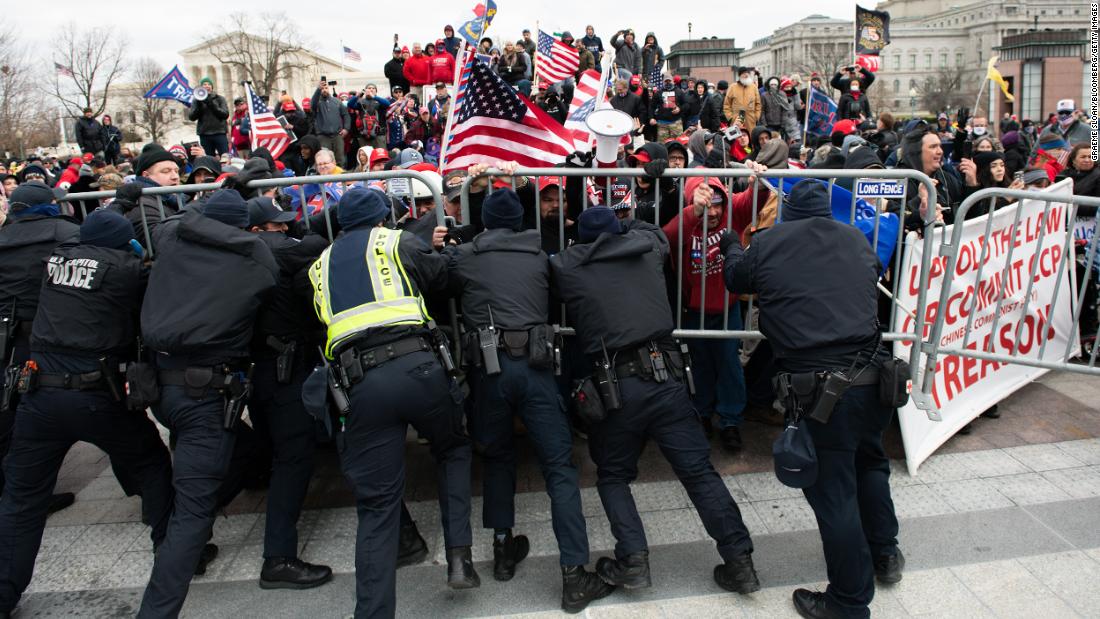 In federal court in Washington, prosecutors released audio recordings of Capitol Police officers calling for help as Trump supporters attacked Capitol Hill. A Capitol Police inspector testifying before the jury broke down as she spoke about the failing police line, then watched videos of the building breach.

Defendant Guy Reffitt, a member of a right-wing anti-government group in Texas who stood before the crowd with a megaphone, is on trial on five counts. He is accused of bringing a weapon to the Capitol, interfering with two police officers outside the building, and threatening his children upon returning home. Reffitt pleaded not guilty.

The Justice Department has collected hundreds of hours of video for its Jan. 6, 2021-related prosecution and, in the Reffitt case, is also using witnesses to explain what it believes its role was in making the case. broader assault on the Capitol and disruption of Congress.

Prosecutors called Reffitt the leader of the mob on Wednesday — “the tip of the spear of this mob,” according to prosecutor Jeffrey Nestler.

Prosecutors released Capitol Police audio recordings during the testimony of an officer who confronted Reffitt in front of the crowd on the West Terrace of the Capitol. The recordings captured panicked officers calling for help.

“We need every unit on the Upper West Terrace right now,” an officer shouted in the tapings, which took place just before 2 p.m.

Capitol Police Officer Shauni Kerkhoff testified that she fired pepper balls at Reffitt as he stood on a railing on the steps of the Capitol, shouting into a megaphone. Reffitt, wearing protective armor, was undeterred, she said.

As the riot escalated, Kerkhoff said, she was “freaked out”, shouting that “they were coming up the stairs” and “we need backup”. She also said she feared the crowd would enter the building, where members of Congress were.

“It’s hard to hear my officers screaming for help”

Later on Wednesday, Inspector Monique Moore, head of the United States Capitol Police Command Center, choked up while testifying about the Jan. 6 attack.

“It was hard to hear my officers screaming for help,” she told the jury.

Moore said she was trying to get resources for the Capitol Police that day because they were overwhelmed with crowds.

“The mood was one of disbelief,” she said.

Moore then paused for several seconds, briefly fanning his face, before continuing to speak.

“It was the first time we had seen something like this…at least since I was 24,” she said. “We have never seen the actions of individuals who came to Capitol Hill in complete disregard of the police, the law and democracy.”

Moore testified that she was the one who called other law enforcement, including the United States Park Police and the Secret Service, for help.

Prosecutors also released surveillance video that showed Capitol windows from the inside as rioters broke in and poured into the building.

Many recordings to play at the trial

At the start of the trial, prosecutors told the jury they planned to use extensive video and audio recordings to prove their case.

They say they will also use Reffitt’s own words against him, showing the jury a taped video conference where the defendant spoke to his right-wing group about the insurrection, as well as recordings of a family argument days later. the attack and Reffitt’s own recordings on the National Mall as he made threatening comments about House Speaker Nancy Pelosi and Senate Minority Leader Mitch McConnell.

“Ripping ’em out by the hair. All the fucking ’em. Dragging ’em out kicking and fucking screaming. I just wanna see Pelosi’s head hit every fucking stairway on my way out, and Mitch McConnell too,” Reffitt said, quoted by prosecutors, pledging to show multiple videos in the coming days that capture his statements during the attack and after.

The jurors — which include a Walgreens cashier, someone with a second home in the Caribbean, and federal government employees, including one who works on Capitol Hill — appeared to take notes throughout, and particularly watched the video closely. showing Reffitt at the front of the crowd.

Reffitt’s defense attorney, William Welch, countered the prosecutors’ statement of evidence with a three-minute opening statement. He told the jury that Reffitt had never assaulted anyone and was unarmed and that any altercation with police where he was pepper sprayed outside the Capitol was over quickly.

The trial is a “rush for judgment,” Welch concluded.