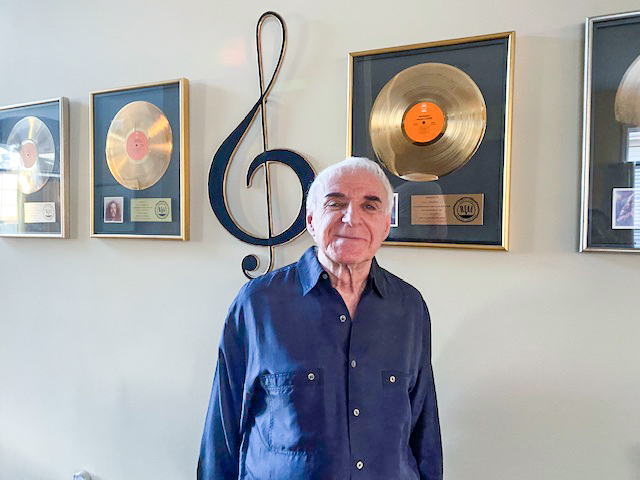 GOOD CALL: As a sound engineer, Phil Giambalvo helped produce a number of gold records. In 1972 he worked on auditioning Bruce Springsteen and urged Columbia Records to sign him, believing he would be a big star. (Photo provided)

In May 1974, famed music writer Jon Landau wrote what has become one of the most famous lines in rock criticism of all time: “I saw the future of rock and roll, and his name is Bruce Springsteen. And one night when I needed to feel young, he made me feel like I was hearing music for the very first time.

But two years earlier, Phil Giambalvo, now a resident of the adult Greenbriar Oceanaire Community in Waretown, was there at the very start of The Boss’ professional recording career. He was a sound engineer for Columbia Records in New York and took part in Springsteen’s first audition for the giant record company.

That was before there was an E-Street Band. Instead, the Freehold-born musician accompanied himself on acoustic guitar as he performed 12 songs, including “It’s Hard to Be a Saint in the City”, “Growing Up”, “Does This Bus Stop at 82nd Street?” and “Mary Queen of Arkansas”. These four titles appeared on his first LP, Greetings from Asbury Park, released in January 1973. It also contained what have become classics, “Blinded By the Light” and “Spirits in the Night”.

Giambalvo, now 79, recalled Springsteen wearing overalls and a t-shirt, a stark contrast to the button-up suits worn by executives and other staff.

“I think Bruce seemed a little impressed that he was at Columbia studios,” said Giambalvo, who spent nearly 30 years with Columbia.

He said Springsteen was brought in by musician and Columbia executive John Hammond, who launched the careers of some of the most famous musicians of the 20th century.

“John asked me what I thought of the kid, and my first impression was that he was a modern-day Bob Dylan,” whom Hammond had signed 10 years earlier. “He even asked me if we should sign him, and I thought we should. There was something about him that made me think he was going to be a big star.

In the years leading up to this audition, Springsteen played with various bands such as the Castilles (when he was still in high school), Steel Mill, Earth, Dr. Doom and the Sonic Boom and the Sundance Blues Band. He also performed as a solo artist, playing clubs along the Jersey Shore, including Long Beach Island.

His second album, the Wild, the Innocent and the E. Street Shuffle, was released in November 1973 and included “4th of July Asbury Park (Sandy)” and “Rosalita”.

But it was the album born to run, which hit record stores in August 1975, which really put it on the map. A sure sign of his arrival in the American consciousness was when he appeared on the cover of Time Magazine.

That Brooklyn-born Giambalvo ended up at Columbia was hardly a surprise, since he became interested in the field of electronics as a teenager. Prior to joining Columbia, he had worked for Marantz Electronics, which he said was a leading hi-fi company at the time.

“High fidelity is the term you started hearing in the 60s when stereo was becoming popular,” he said.

Giambalvo said that when he started working at Columbia in 1968, he learned all aspects of the recording industry.

“At first I was in research and development,” he said. “Then I got into maintaining equipment and making recordings.”

The list of bands Giambalvo has worked with in the studio is quite long. He was there for Aerosmith’s self-titled debut album in 1973, which contained what is considered the band’s signature song, “Dream On”.

“I told their lead singer, Steven Tyler, that he was going to be successful because he had lips like Mick Jagger,” he recalled.

“Crazy” and a “crazy” is how he described Ted Nugent.

“I worked on his weekend warriors and Cat scratch fever albums,” Giambalvo said.

“Blood Sweat and Tears was more about jazz and blues, while Chicago was more rock,” Giambalvo said.

He said Simon and Garfunkel, with whom he worked on their iconic A bridge over troubled waters 1969 album, were “very studio-focused”.

“I was going to bring girls from Forest Hills, where they both grew up,” Giambalvo said. “They were huge fans of them, but[SimonandGarfunkeldidn’twantthembecausetheydidn’twanttobedistracted”

Giambalvo’s resume isn’t limited to rockers, as he has also done sound for Tony Bennett and Andy Williams.

“Two of the nicest people you would ever want to meet,” he said.

Giambalvo’s electronic experiments were not limited to the recording studio, as he also designed loudspeakers and lighting for night clubs.

“I was the first to develop a computerized lighting system,” he said.

Working in the clubs gave him a close view of changing musical trends and by the mid 70’s disco was emerging.

“I told Columbia executives that disco was going to be huge, but they thought it would just be another fad,” Giambalvo said. “Well, I was right and they were wrong.”

Then, as disco began to decline in the early 80s, rap and hip-hop emerged.

“It’s not really my genre of music,” he said, “but I could see how popular it was getting. Just like back in the disco days, there were so many new record labels , all dedicated to the production of these new genres.

What is Giambalvo’s style of music?

“In the 70s, I was a big fan of Burt Bacharach. But I really like romantic classical composers – Rachmaninoff, Tchaikovsky, Prokofiev. And any musical score composed by John Williams.

Fifty years after that first audition, Springsteen is still going strong, as his E-Street Band prepares for another tour, which has sparked controversy over ticket prices.

“When I look back, no one I worked with in the beginning was as great as Bruce,” he said. “It’s great to know he’s still so popular, and I’m glad I told the company they should sign him.”