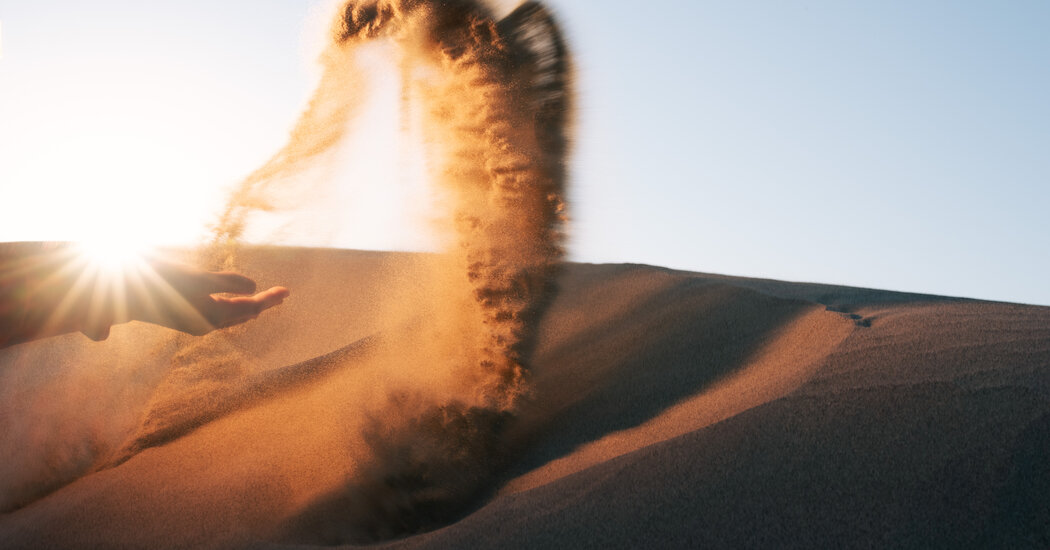 The secret sounds that make up ‘Dune’

“Dune” is in the details, and Denis Villeneuve knows almost all of them. The French-Canadian filmmaker grew up obsessed with Frank Herbert’s seminal science fiction novel and spent the last years of his life adapting that 1965 book into a fledgling film franchise. The first episode was released in October and the second will start filming later this year, so if there’s anything you want to know about the inner workings of “Dune”, Villeneuve is the man to ask.

But last week in Malibu, Calif., as he stared at a box of blue cereal in obvious amusement, Villeneuve admitted a key detail had eluded him so far.

“I learned today that there were Rice Krispies in ‘Dune’,” he said.

We were at Zuma Beach on the kind of warm March afternoon that New York readers would surely prefer I didn’t dwell on, and Villeneuve’s sound editors, Oscar nominees Mark Mangini and Theo Green were nearby, pouring grain into the sand. It wasn’t meant to provoke seagulls; Mangini and Green wanted to demonstrate the sound-gathering techniques they used to animate Arrakis, the desert planet where “Dune” hero Paul Atreides (Timothée Chalamet) discovers his destiny.

“One of the most compelling images in the film is when Paul first set foot on the planet,” Mangini said. Since the sand of Arrakis is laced with “spice”, a precious and hallucinogenic substance, the sound designers had to find an audible way to convey that something special was underfoot.

To explain it to me, Mangini planted his work boot in the soft sand he had sprinkled with Rice Krispies. The sand produced a subtle and seductive crunch, and Villeneuve broke into a big smile. Although he had heard it many times in post-production, he had no idea what the sound designers had concocted to capture that sound.

“One of the things I love about filmmaking is the crossover between NASA-type technology and duct tape,” Villeneuve said. “Using a super expensive mic to record Rice Krispies really moves me!”

“Dune” is full of these clever, secret sounds, almost all of which are derived from real life: of the 3,200 custom sounds created for the film, only four were created solely with electronic equipment and synthesizers. Green noted that with many sci-fi and fantasy films, there’s a tendency to indicate futurism using sounds we’ve never heard before.

“But it was really Denis’ vision that this movie should be as familiar as certain regions of planet Earth,” Green said. “We’re not putting you in a sci-fi movie, we’re putting you in a documentary about the people of Arrakis.”

The 94th Academy Awards will take place on March 27 in Los Angeles.

To that end, Green and Mangini made an initial expedition to Death Valley to collect natural noises that could later be used for the film’s sound palette. “When an audience hears an acoustic sound, there’s a subconscious box that’s checked that says, It’s real“, said Mangini. But in this reality, Mangini is not afraid to push things a little: while working on “Mad Max: Fury Road‘, for which he won an Oscar, Mangini mixed the sounds of dying animals into the film’s most fearsome vehicle crash.

For another “Dune” demonstration, he started burying a small piece of microphone in the sand. “It’s an underwater microphone, a hydrophone,” Mangini explained. “It’s the kind of thing you usually throw in the ocean to record a humpback whale, but we found another way to use it.”

In “Dune”, the characters use a staked device called a thumper to pound sand rhythmically and summon huge sandworms. To achieve this sound, Mangini and Green buried their hydrophone at various depths in Death Valley, then used a mallet to strike the sand above the buried mic.

“We would also record it above ground to get the actual sound of the impact,” Mangini said, demonstrating his method to me with a few tweaks in the sand at Zuma Beach. “Each of these hits is the ka dunk thumper, as you see in the movie.

To lend grandeur to the sandworm’s gaping maw, Green recorded a friend’s dog as it gnashed its teeth, while Mangini added whale-like grunts that matched the rhythm of the pounding – filth, filth, filth. And how did they transport the sandworm rushing through the sand, liquefying every particle in its path?

“I had this idea of ​​taking a microphone, covering it with a condom, and digging it under the ground,” Mangini said.

“I wasn’t aware of that,” Villeneuve said, trailing off. Its sound designers laughed. “We never talked to Denis about the condom,” Green said.

Green and Mangini worked with Villeneuve on his previous film, “Blade Runner 2049and the director took them both on board as soon as he secured the rights to Herbert’s novel, instead of waiting for post-production, as is more usual.

“I wanted Theo and Mark to have time to investigate, explore and make mistakes,” Villeneuve said. “It’s something that really traumatized me with my early films, where you spend years working on a script, then months shooting it and editing it, and then at the end the sound guy comes along. and you barely have enough time.”

By hiring his sound designers early and releasing them, Villeneuve could even take some of their findings and incorporate them into Hans Zimmer’s score, producing a holistic sonic experience where percussive music composition and pervasive sound design can sometimes be confused.

Our thoughts on the top 10 Oscar nominees

“Don’t look up.” Two astronomers discover a comet heading straight for Earth. When they deliver the bad news, the President of the United States has other things on her mind to pay attention to than impending doom.

“Driving my car.” A theater director grapples with the death of his wife as he mounts a production of “Uncle Vanya.” A driver assigned by the theater company transports him to and from work while holding back his own emotional reserves.

“Licorice pizza.” In Paul Thomas Anderson’s coming-of-age romance, a child performer who has reached the height of teenage awkwardness ages out of his professional niche. His meeting with Alana, 20 and over, for whom he instantly falls in love, gives the story a hard time.

“Alley of Nightmares.” A con artist with empty pockets and a mysterious past joins the sordid world of 1930s carnivals. He soon begins to scour women, including a clairvoyant whose husband once pulled off an act of mentalism.

“The power of the dog.” Phil Burbank has played cowboy his entire adult life, herding cattle on the family ranch in Montana for decades. When his brother George marries a widow with a teenage son, a lifelong family dynamic is disrupted.

“West Side Story.” Steven Spielberg’s remake of one of Broadway’s most famous musicals – a modern take on “Romeo and Juliet” – centers on the forbidden love between Tony and Maria, who are embroiled in two rival street gangs in the West Side of Manhattan in the 1950s.

“Hans embraced that, he wasn’t afraid of that,” Villeneuve said. “It works because it’s like a band.”

And just like a band, the sounds of “Dune” benefited from a few intriguing singers. To create the voice, a persuasive way of speaking that allows Paul and his mother (Rebecca Ferguson) to tap into the power of their female ancestors – an order of witchcraft called the Bene Gesserit – Villeneuve and his sound team chose three older women with smoky, commanding voices, then superimposed their line readings over those of Chalamet and Ferguson.

One of those women was just the British singer Marianne Faithfull, whose whiskey-soaked voice is one of rock ‘n’ roll’s most recognizable. Listen carefully as the characters use voice and you might hear 75-year-old Faithfull hiss, “Kill him!” This piece of casting turned out to be fairer than Villeneuve could have imagined: Faithfull told the director that in the 1960s she was quickly friends with Charlotte Rampling, who plays the Bene Gesserit’s most fearsome emissary. .

“At 20, in the streets of London? Villeneuve reflects. “They were killers!”

As Villeneuve and his sound designers swapped stories, I mentioned the Oscars, where “Dune” is nominated in 10 categories. (Mangini and Green share their nomination with Mac Ruth, Doug Hemphill and Ron Bartlett.) Five of those runs — sound, score, editing, production design, and hair and makeup — will be featured along with the three categories of shorts in the hour. before the live broadcast, then edited into the broadcast in an abbreviated form.

The implication is that these races aren’t interesting enough to compel a casual viewer, which Mangini refuted by leaning over my recorder to mimic a cat’s purr – one of many noises, including the flapping of a cat. wings of a Hungarian beetle, which were mixed together to create sounds for the ornithopter plane in “Dune”.

Villeneuve agreed: “Sound is one of the tools that still makes the theatrical experience interesting. And it’s at the forefront of his mind as he completes the script for the sequel, which promises to take Paul into an even more eccentric sonic realm: “The only thing I can say about ‘Dune 2’ “, Villeneuve teased, “is that it’s as much about sound as it is about images.

He glanced to his right, where Mangini and Green were carefully digging the hydrophone buried in the dune. These mounds of sand have an interesting resonance, Villeneuve told me: “It’s a giant drum in some ways.” Adding this resonance to the film’s psychedelic soundtrack created a tangible sensory experience that, in one case, had another surprising meaning added.

“My daughter saw the film in Switzerland in the smell-o-rama, can you believe it?” Villeneuve told his sound editors.

And what should it smell like when a sandworm emerges from the depths of the desert, its toothy mouth opening terrifyingly wide?

Learn how to build a business model designed for scalability

The 8 Best DAW Apps for Music Production on Linux