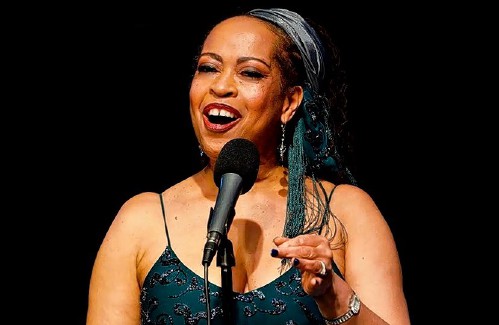 It’s been a busy fall for the Hawks and Reed Performing Arts Center in Greenfield and so far their schedules show no signs of slowing down. Tonight, Thursday October 14 at 7 p.m., they welcome jazz singer Samirah Evans, who reunites with her band the Handsome Devils, for this very special show.

Evans, who resides in Brattleboro, founded the group in 2009 to support the release of their second album “My Little Bodhisattva”. The Handsome Devils are a group of accomplished musicians whose versatility in various genres, including jazz and blues, makes them the perfect accompaniment to Evan’s powerful and moving voice.

Evans was a well-established singer in New Orleans’ vibrant music scene before Hurricane Katrina forced her to relocate to her husband’s hometown of Brattleboro. Since moving to Vermont, she has found a welcoming audience for her many musical projects. She has been a favorite at Hawks and Reed and her many on-site shows have been a hit with local music fans who are drawn to her New Orleans-influenced vocal style and strong stage presence. They will welcome his return with this show.

The Handsome Devils are pianist Miro Sprague, saxophonist Michael Zsoldos, drummer Conor Meehan and guitarist Jason Ennis. They are joined by bassist Marty Jaffe, who has performed frequently with the band since 2011.

It is not easy to put together a group of musicians of this caliber, as they are all sought after musicians who are involved in several projects, including solo work and teaching. Then there is also the geography to contend with.

Pianist Miro Sprague grew up in Shutesbury and has performed in the area since he was a teenager, but currently resides in Los Angeles. Sprague’s impressive resume continues to grow as he works primarily in jazz and improvisational music. In addition to his solo work, he is a member of a few other groups, including a trio with fellow Handsome Devils Marty Jaffe and Jason Ennis.

“Miro still has family here, so I asked him this summer if he’s coming to the area and if so, how about getting the group together,” Evans said via email. “It turned out that he had a few concerts in New York City and was planning to visit his family on the East Coast, so now was the time to ask him.”

After establishing Sprague’s involvement, Evans began to field the rest of the group.

“Before Miro moved to Los Angeles, we had annual reunion concerts because he lived closer to New York City, but guitarist Jason Ennis was the missing member for many years,” Evans said. “Jason started a family and came back from New York to the Berkshires, so it was much easier to get him on board this time around as well.”

Ennis is a gifted guitarist with a background in jazz, blues, Brazilian music and classical music. It’s been a decade since he played with the Handsome Devils after he last worked with the band when “Hot Club: Live at the Vermont Jazz Center” released in 2011.

Ennis performs with many bands and has toured the United States and Chile. You may have seen his performance at the recent Fresh Grass Festival in North Adams, where he performed with world music group Mukana, which also includes Handsome Devils drummer Connor Meehan and saxophonist Zsoldos. The members of the Handsome Devils have collaborated with each other in many different projects over the years.

Evans is not only happy to perform with her Handsome Devils again, she is also happy to perform in front of a live audience again. During the lockdown, she performed a few streaming events but didn’t start playing until August.

“I got my feet wet before this gig, which I’m grateful for as it took me a few gigs to get my rhythm back, which prepared me for this performance,” said Evans. “So I’m ready to strike with my Handsome Devils!” “

Who knows when these Handsome Devils will reunite again, so don’t miss out on what promises to be a night of music to remember.

“We don’t take these opportunities to play together for granted,” said Evans. “Each member has experienced success with their own projects since that time. Many now also have families! We are so excited to be able to schedule this show and we are looking forward to it.

Doors open at 6 p.m. The Hawks and Reed Performing Arts Center is located at 289 Main Street. Tickets available at www.hawksandreed.com or at the door.

The music continues at Hawks and Reed with a singer-songwriter weekend. Mark Erelli appears on Friday night and Steve Forbert on Saturday. Erelli is finally in a position to tour to support his 12th studio album “Blindside” which was released at the end of March 2020. The album deals with the kinds of questions one asks when they reach a certain age and start to look back. on their life. The subject might be serious, but songs like “Her Town Now” are downright rock. Erelli will be joined by his group for this show.

Then on Saturday, it’s Forbert, a veteran folk-rocker who has been making music for four decades. The Mississippi-born singer-songwriter continues to move audiences with his worn voice and thoughtful songs. You may know him from the song “Romeo’s Tune” which was a hit in 1979.

Forbert has released 20 studio albums, the most recent being “Early Morning Rain,” a collection of covers by everyone from Leonard Cohen to Elton John. He also wrote his biography “Big City Cat: My Life in Folk-Rock” which covers his rise in the New York folk world at a time when punk and new wave were all the rage. An interesting anecdote: Forbert appeared in the video for “Girls Just Want to Have Fun” by Cyndi Lauper. A seasoned artist who knows how to deliver, you won’t be disappointed with this show.

Tickets for these shows are available at www.signaturesoundspresents.com

Sheryl Hunter is a musical composer who lives in Easthampton. His work has been published in various regional and national magazines. You can contact her at [email protected]