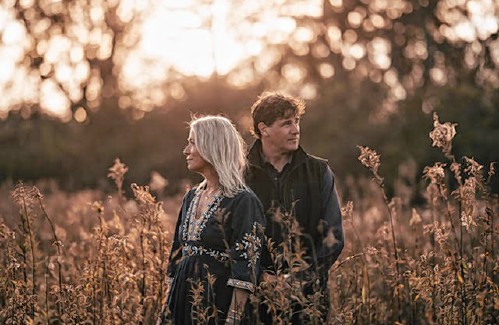 Spring has officially arrived, and with it comes the music. This weekend alone is packed with shows, from Amy Helm at the Shea Theater on Friday to former Caroline Chocolate Drops member Hubbie Jenkins upstairs at Perch at Hawks and Reed on Saturday. You can also catch the Ryan Montbleau Band when they put on a Green River Festival show in the Hawks and Reed Saturday Night Ballroom. During this show, participants will have the chance to win tickets for the festival. Along with all the live shows starting to take off, there are a few new releases that will provide the perfect soundtrack for the hot days ahead, so let’s take a look at a few of them. Most are available on all streaming services, and for those available on CD, I noted the website. Enjoy!

“Tomorrow at the sea” – Opal Canyon –

Opal Canyon is the husband and wife team of singer/songwriter Debra DeMuth and singer/guitarist/songwriter Dave Houghton (Fancy Trash). Their debut album, “Beauty and Loss,” was released in 2019. The Americana duo are gearing up to release a follow-up, “Tomorrow to the Sea,” on April 8. When they made the first album, the pair lived in Conway, and their backup band consisted of local music heavyweights such as Ray Mason on bass, Jason Smith on drums, and Bob Hennessy on guitar. DeMuth and Houghton now live on Cape Cod, but they haven’t forgotten their roots and have recruited Valley musicians like Smith and drummer JJ O’Connell to play on the new album. They also enlisted Jon Evans (Tori Amos, Sarah McLachlan) to serve as producer and multi-instrumentalist, and he had a substantial impact on the project.

“Tomorrow to the Sea” finds DeMuth writing songs that shine a light through the darkness as themes of hope abound. We hear that on the opening track, the sweet ballad “The Invisible”, a song about regret and connection. DeMuth’s clear, smooth voice floats above soft acoustic guitar and percussion as she repeatedly sings, “If only I had known / If I had only seen / I would have saved you.”

Evans’ piano and lap steel work is the perfect accompaniment to “Come Ashore,” a powerful ballad about getting through tough times. “Hope lives on the ocean / Sometimes it comes to shore / Like the spotlight on the singer / And a lover through the door / Let me be the light, let me be the oar / Let me be the calm, in the storm.”

“Tomorrow at the Sea” begins quietly but changes speed as it goes. The trumpet on “Moon Song Swing” gives the song a New Orleans flair, and the bouncy “Tomorrow to the Sea (Big Hugs)” captures the same feel-good vibe heard on “Sunday Driving,” a song popular from the first album. There are beautiful harmonies throughout these nine tracks, and on “Last Hurrah”, Houghton’s angry vocals complement DeMuth’s softer vocals nicely. They also included a nice cover of REM’s “(Don’t go Back to) Rockville” which is faithful to the original.

On “Tomorrow to the Sea,” Opal Canyon crafted an album brimming with powerful emotion backed by solid musicianship and memorable vocals. It’s an album that feels good; a relaxing and soothing listen reminiscent of the feeling of sitting on the beach on a hot summer day.

Opal Canyon will be hosting a CD release show at the Parlor Room in Northampton on Saturday, April 9 at 7 p.m. opalcanyon.net

On their ninth studio album, “Hollywood”; the Lonesome Brothers do not refer to the Californian city where the films are shot; they refer to the long-defunct club of Bernardston. A photo of the band standing outside the now demolished nightclub adorns the album cover. Hollywood is one of the places where bassist Ray Mason and guitarist Jim Armenti honed their country rock music when they formed 37 years ago. It’s been a long road, but the duo, who are both talented songwriters, continue to create some of the best music you’ll hear coming out of this region.

On this album, like all the others, guitarist Armenti and bassist Mason talk songwriting and lead vocals while Keith Leverault’s solid drums anchor everything. ‘Hollywood’ is the band’s first album since 2013’s ‘Check Engine’; and the 12 tracks here would be right at home blasting the jukebox in a club like Hollywood. You can imagine the dancers moving to tunes like Mason’s “Never See The Sun”; and Armenti’s “What’s in the Bag”; a song that features one of the record’s many incredible guitar solos.

Through the rocking guitar heard on “Holler to be Heard”; to the bluesy vibe of “Poison in the Well,” the Lonesome Brothers have given us 12 well-crafted songs that we’ll come back to again and again. Producer Tom Mahnken (Trailer Park), who also plays keyboards here, is also helping to deftly guide these musicians in crafting an album that’s a welcome addition to the Lonesome Brothers’ already extensive catalog. Hopefully they won’t make us wait so long for the next release.

The Lonesome Brothers perform at Luthier’s Co-op in Easthampton on Friday, April 1 at 8 p.m.

Greenfield rockers The Stone Coyotes haven’t been making music as long as the Lonesome Brothers, but having formed in 1991 they’re getting closer. The band, based in Greenfield, includes Barbara Keith on vocals and guitar, her husband Doug Tibbles on drums and Doug’s sons, John Tibbles on bass and Doug Tibbles Jr. on guitar. The Coyote’s latest release is a five-song EP titled “Rough and Tumble” which, as they say, puts the band back in the saddle. On this release, the band continues their unique way of blending country influences into a heavy rock sound.

Keith is a storyteller who writes character-driven songs, often focusing on loss and longing. The record opens with acoustic guitar “Voices in the Rain”; where the song’s narrator hopes to hear the voice of a lost love. “Thought I heard you call me / Thought I heard my name / Right outside my window / Voices in the rain,” Keith sings. Tibbles’ direct drumming and searing guitar make “Put Some Rock in It” a good representation of the rock side of the band’s sound. The song was streamed on SiriusXM! Outlaw radio. The record ends with a remix of “The Old Post Road”, a song from the band’s 2019 release, “Hit the Ground Running”.

While “Rough and Tumble” is a somewhat softer collection of songs than those heard on the band’s previous recordings, these Coyotes still have a strong bite.

Sheryl Hunter is a music writer from Easthampton. Her work has appeared in various regional and local publications. She can be contacted at [email protected]