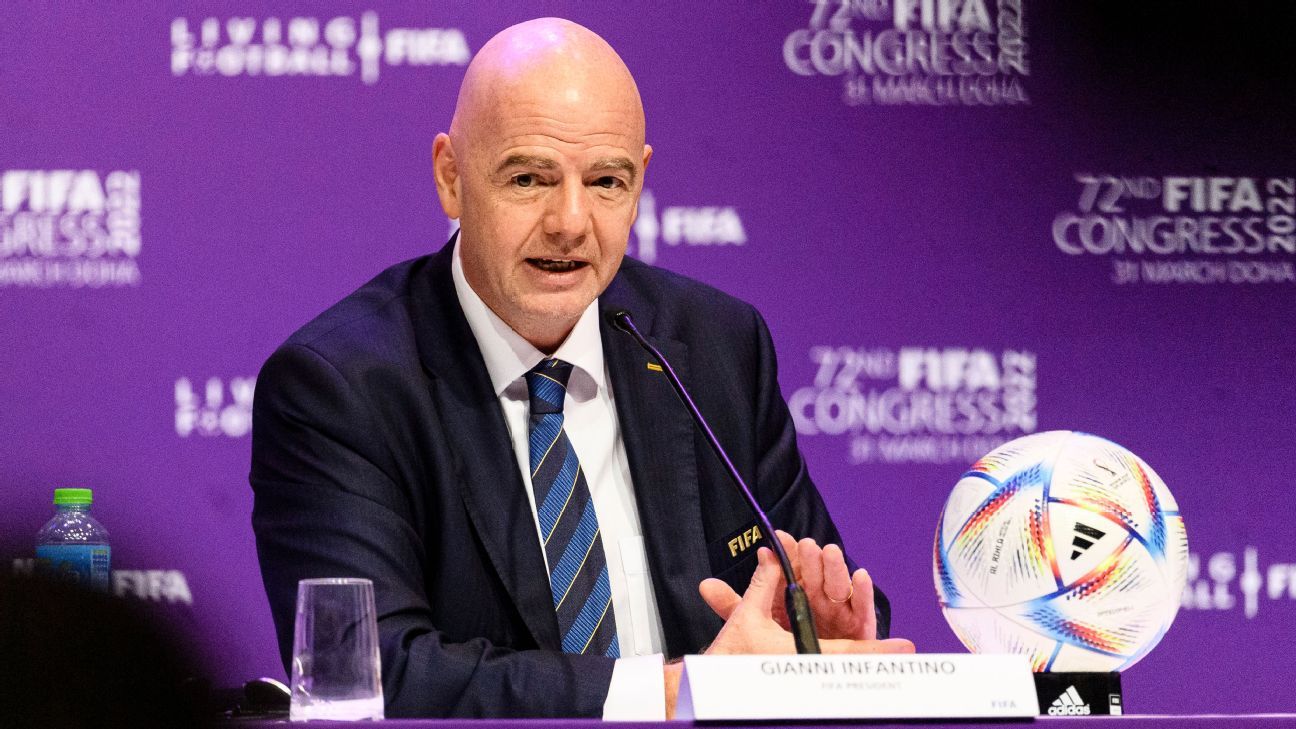 DOHA, Qatar — FIFA President Gianni Infantino’s opening quote at the first World Cup press conference made headlines, and rightly so. “Today I have very strong feelings, today I feel Qatari, today I feel Arab, today I feel African, today I feel gay, today I feel disabled, today I feel like a migrant worker,” Infantino said. “Of course, I’m not Qatari, I’m not Arab, I’m not African, I’m not gay, I’m not disabled. But I want to, because I know what it means to to be discriminated against, to be bullied.”

Then he cited his own story of growing up as the son of parents who had emigrated from the impoverished south of Italy to Switzerland, as well as the fact that as a child he was bullied for his red hair and spots of freckles.

As far as its own PR goals go, this one will be hard to beat. Infantino may have meant his words as a gesture of solidarity and inclusion, but they came across as awkward, rude and offensive. An experience as a discriminated minority (Italian immigrants in post-war Switzerland and – I suspect – red-haired and freckled children) is not the same as the discrimination and experience of other minorities. Especially when you’re white, male, European, non-disabled, and heterosexual.

Needless to say, there is a huge difference between the experience of Nepalese and Bangladeshi migrant workers in Qatar and other Gulf countries (as well as elsewhere) and that of an Italian growing up in Brig, Switzerland, less than an hour’s drive from the Italian border. A border that one does not need an “exit visa” to cross, unlike migrant workers who, until seven years ago, often needed authorization if they wanted to leave their job in Qatar and return home.

In some ways, we’ve been here before. Infantino gave a press conference during the 2018 World Cup in Russia wearing one of the polo shirts distributed to tournament volunteers as a sign of recognition and solidarity for all those unpaid workers who gave their time for the good of the soccer. As a visual and as a concept, that too backfired because most understand that a guy standing outside a stadium in a bib directing traffic isn’t the same as a man in a suit who gets paid handsomely to deliver a World Cup.

In Qatar, the press conference took an unusual turn at the end when FIFA media relations director Bryan Swanson took the floor to say: “I’m sitting here as a gay man in Qatar. We have been assured that everyone will be welcome and I believe everyone will be. Just because [Infantino] isn’t gay, doesn’t mean he doesn’t care. He does. You see the public side and I see the private side.”

It’s pretty much unprecedented for a communications person, whose job at press conferences is usually just to decide who gets to ask questions, to make such a personal announcement. But it was an extraordinary press conference. And while the world will focus on Infantino’s malaprops, there’s another angle to it. Whatever the claim of politics, religion and morality to not be part of the conversation around sports, has now disappeared. That probably suits Infantino and those who want FIFA to be seen as some sort of positive agent of change.

Heck, a few days ago at the G-20 meeting in Bali, Indonesia, Infantino called for a ceasefire in the Russia-Ukraine dispute over the World Cup. He recounted how he used his political influence to organize direct flights from Israel to Doha where Palestinians and Israelis would be seated side by side. He reminded everyone that under his leadership, FIFA inserted all sorts of human rights requirements for nations wishing to bid for the World Cup. (It’s not clear if the current version of Qatar would respect them, but it’s pretty obvious that the 2010 version would not).

He said that not only Qatar’s winning of the World Cup had already led to a significant reform of labor practices (minimum wage, better working and safety conditions and abolition of kafala system, with its de facto ‘exit visa’), but he would also go further, citing his efforts to set up a permanent United Nations International Labor Organization office in Doha (to monitor the treatment of workers) as well as the possibility of a World Cup legacy fund that could bolster compensation for workers injured on the job.

James Olley summarizes a remarkable speech by FIFA President Gianni Infantino in which he denounced the “hypocrisy” of nations criticizing Qatar.

If Stanley Rous, one of his predecessors as FIFA President and the man who refused to support the boycott of apartheid-era South Africa some 60 years ago because that “politics and sports should not mix”, had heard that, he would probably have been appalled at the passing. Still, that’s where we’re at, and it’s probably a better place than when we bury our heads in the sand and pretend the sport exists in some sort of entertainment vacuum, removed from the real world.

Most people in the world can agree, for example, that migrant workers should be treated decently. It is an accepted and universal value. LGBTQIA+ rights? In many countries yes, in others, like Qatar, not so much, perhaps because there are religious and cultural roots to discrimination, which were once commonplace in the world.

And when you step into it, you get uncomfortably close to the third rail of religion and morality, which is usually not a good place for the president of a world organization.

Indeed, when Infantino went there during his speech, he ran into another pitfall when he spoke of how long it had taken Western nations to “make progress” on issues such as human rights. LGBTQIA+ and even universal suffrage (women in Appenzell, Switzerland only got the right to vote in 1990).

All of the above is true, but the problem is that when you define it as progress, you are implicitly saying that those who don’t share these views are “late” and “late”. The argument “it took us a long time, they’ll catch up to us eventually” suits progressives but risks upsetting people who, for whatever reason, might view it – wrongly, in my opinion – as decadence.

In fact, in the same speech, he said Europe was in no position to give ‘moral lessons’ and should instead apologize ‘for the next 3,000 years’ for its past actions. (presumably a reference to colonialism and the exploitation of much of the rest of the world). But isn’t believing that members of the LGBTQIA+ community should be discriminated against basically a “moral lesson” about how you should treat other human beings?

In 2014, E60 traveled to Qatar to report on the plight of migrant workers there. This spring, they went back to see what had changed, and what hadn’t changed, over the past eight years.

Then there was the answer he gave to a question about Iran, who will face England on Monday, and the government’s crackdown on women and the violent crackdown on dissidents. It hit close to home because Infantino led the push for Iran to allow women in stadiums to watch men’s football a few years ago, overturning a long-standing ban.

Here he sounded like Stanley Rous, saying it was two teams playing football, not two regimes. And that acting against Iran would be unfair, unless “you think 80 million Iranians are all bad.” If there had been a Russian in the room, that person might have said, “Does that mean you think 145 million Russians are all bad? Because you banned Russia from qualifying for the World Cup after my government started a war with Ukraine.”

You can see Infantino’s reasoning. Russia was the subject of a UN resolution condemning the invasion, Iran’s abuses were not treated in the same way and, horrific as they are, remain a domestic affair, n not directly affecting other nations. Having Iran fans – many of them from the Iranian diaspora and strongly opposed to the regime – can actually shine a light on what’s going on there. And, of course, there is realpolitik: Iran is there and they start in 48 hours.

Infantino could have said any of these things. He did not do it. He went with the “not all Iranians” angle which, in light of Russia’s absence, seemed tone deaf.

Infantino’s words speak of something else. He can be a politician in the sense that he holds elected office and obviously is good enough to win the support of most of the 211 FIFA member countries in the world. Indeed, he will run unopposed for re-election as the FIFA president this spring.

Where he’s definitely not a politician is in communicating with the media — and, presumably, fans as a whole — in a way they understand and can relate to. That’s how you end up with Saturday’s extraordinary press conference. As one long-time FIFA watcher told me: “Gasoline doesn’t usually put out fires.” It’s also true that – whether because FIFA keeps its promises for most of its members or because the bar had been set so low by the corrupt regime before Infantino took power in 2016 – Infantino could all might as well wear a fireproof suit.