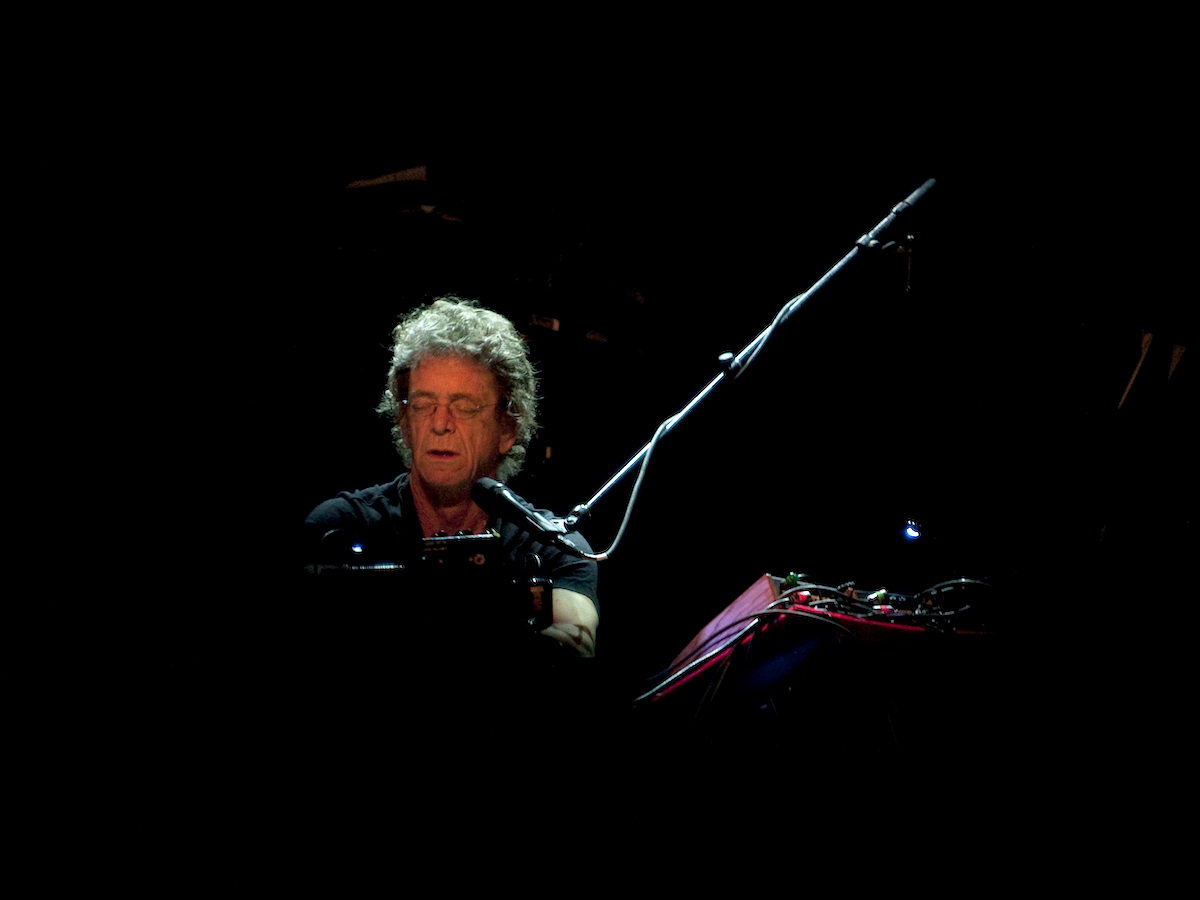 “I was in a rock ‘n’ roll band,” Lou Reed nervously reminds his audience at St. Mark’s Church Poetry Project in the winter of 1971. A year earlier he had left the Velvet Underground and returned to his primary vocation: writing poetry. The full audio of this reading is one of many literary interludes in the multimedia exhibition Lou Reed: Caught Between Twisted Stars at the New York Public Library for the Performing Arts at Lincoln Center.

Drawn from the archives of musician, Lou Reed Papers 1958–2015 (Reed died in 2013 aged 71), housed at the library, the exhibit was curated by a team that includes his widow, Laurie Anderson, as well than Don Fleming and Jason Stern. The exhibition includes personal letters, photographs, posters, audio-video stations and an immersive listening room that features live performances and “Metal Machine Trio: The Creation of the Universe”, the installation of sound art by Reed, featured in a wall-sized video with Ambisonic (3D) sound, designed by Raj Patel of acoustic engineering group Arup.

The exhibition’s most interesting subplots are Reed’s practices as a poet and literary figure. His showbiz persona as underworld protopunk Elvis—crazy, evil, and dangerous to interview—long obscured the introspective versifier he was. Alongside wordsmiths like Leonard Cohen, Joni Mitchell, Bob Dylan and Laura Nyro, he helped transform pop songwriting by tapping into its roots in literary culture. As recently as 2006, Reed told an interviewer, “I wanted to put [William] by Burroughs [Beat-era novels] and Ginsberg To yell in [rock] fittingly, the exhibit’s entrance features a video of Reed reading “Romeo Had Juliet” (1989). Stripped to music, the lyrics are thoughtful and irregular, enlivened by Reed’s signature deadpan phrasing – l spoken word poet’s empathy colored in various New York greys.

An entire room is dedicated exclusively to this literary identity: Reed as a studious English scholar who graduated with honors; the jobard poet among the poets publishing in journals of Highlights at Life at The Paris Reviuh; the former rocker playing the role of the leather-clad global ambassador of poetry in the MTV era. And Reed’s recently republished volume, I’ll Be Your Mirror: The Collected Lyrics (Hachette Books, 2020), could be required reading in a course on New York poetics.

Of course, how Lewis Allan Reed became these many Lou Reeds living in the collective consciousness of the world will be the main attraction of the exhibit. This evolution is further distilled in newly remastered recordings, Lou Reed: Music and lyrics, May 1965 (Lights in the Attic Archives, 2022). These original demos, some of which are featured in the exhibit, are based on unopened tapes that Reed had mailed to himself more than half a century ago as “poor man’s copyright.” , featuring simplified versions of classics like “Heroin” and “Pale Blue Eyes” (1967), and a range of previously unknown songs that feature a songwriter mastering multiple folk and pop forms, just as he was well read in the darkest pockets of modern literature.

This new LP’s first iteration of Reed’s “Waiting for My Man” (1967), like its subsequent incarnation as the Velvet Underground’s anthem, takes white middle-class listeners on a journey to score in a booth of Harlem heroin shooting. But the exhibit shows the songwriter was raised a safe distance from those nasty streets. Candy came from the island, as the man sings in “Take a Walk on the Wild Side” (1972), as does Reed, who was born in 1942 and grew up in the suburbs of Freeport, Long Island. Wall charts in the exhibit indicate that he was captivated by doo-wop and the early hits of Fats Domino and Chuck Berry. Her Syracuse teacher, poet Delmore Schwartz, taught her how to comparably get high from books, reading aloud from Joyce’s Finnegans Wake (1939). (For a deep dive into those formative years, the curators released an intimate and revealing interview with Reed’s classmate and lifelong friend at Syracuse University, musician Garland Jeffreys.)

After graduating in 1964, Reed began writing multi-genre pop fodder for music publishing house Pickwick International in New York where, during a studio session, he met future bandmate VU. , the Welsh-born classically trained avant-garde musician. John Cale. As the exhibit shows, this is where things really got interesting. At night, Reed and his band were playing downtown clubs when filmmaker Barbara Rubin introduced them to Andy Warhol, who immediately became their former manager. It was in this white-hot milieu that Reed, encouraged by Warhol, took full possession of his songwriting alchemy: he took on the concise economy that structured a pop hit like Dion’s “Teenager in Love” (1959). and the Belmonts and replacing the sugary palaver of pop lyrics with stories of lovers, drug addicts, abandonments, hustlers, artists and rebels he knew firsthand and absorbed as he read novels like Hubert Selby Jr. Last exit to Brooklyn (1964) – adding his voice to generational peers who are already tapping into this vein of inventive and searing personal testimony, including poets Gregory Corso, John Wieners and Frank Lima.

In his introduction to I will be your mirror, Reed says he sought to write songs about “gloomy chaos” in real life. “We are the people who are desperate beyond emotion”, as he says in his prose poem “We Are the People” (1970) (recently recited by Iggy Pop in a new video). Whether dark or violent, Reed’s terse song stories rely on humorous, twisted and poignant metaphors, and serve up pop clichés in order to turn them around and reveal hidden truths. “You will reap what you sow,” says this unexpected coda to “Perfect Day” (1972), Reed’s twisted homage to young love.

While his temperamental characters peer through dirty windows in search of transcendence and twilight, they don’t place much emphasis on self-care, or even self: “What do you think I would see”, croons the singer in “Candy Says” (1967), “if I could get away from myself.” And what we would blithely call “toxic” in people or relationships, Reed presents as inexorable conditions in life, and – as he shows in the socially conscious LP New York — everyday sadism also permeates urban spaces and political life. Desire and its cousin, ambition, are drugs no one can get rid of. His most devious lyrics merge cryptic confession, perverse abjection and oblique exorcism, constructed simply around three chords and augmented by some of the finest session musicians and recording engineers in rock history.

Caught between twisted stars shows that there is a welcome release and even some solace to be found in this Reedian body of work, and much to wonder about the resulting fame and infamy – the sheer physical toll of it all. He never took a break. Still Reed continued to draw inspiration from these literary leanings, through two collaborations with director Robert Wilson (time toggle1996, based on HG Wells, and Poetry2000, inspired by Edgar Allen Poe), and his estate produced a posthumous collection of poetry titled Do angels need haircuts? (Anthology Editions, 2018). The exhibit also establishes that over Reed’s last decades, members of British rock songwriting royalty like Paul McCartney and Jimmy Page regularly sent him limited editions of their latest material, soliciting his approval, just as generations of already successful young rockers collaborated with him to rebuild their artistic street cred.

Renewing his literary credibility probably motivated Reed to turn to the poetic community based at St. Mark’s Church in 1971. In poetry, our least marketable form among cultural mediums, he probably reclaimed the creative chops attributed to him by most famous and perhaps most deeply fan-influenced, David Bowie, who tells PBS American masters documentarians in 1997 that Reed somehow remade the complicated art of rock songwriting by illustrating John Lennon’s direct advice to budding writers: “Say what you mean, make it rhyme, put it on a setback.”

It seems deceptively easy. But as the ancient Greek poets knew – and Reed too – poetry is the first element of music.

Lou Reed: Caught Between Twisted Stars continues at the New York Public Library for the Performing Arts (40 Lincoln Center Plaza, Upper West Side, Manhattan) through March 4, 2023. The exhibit was curated by Don Fleming and Jason Stern.