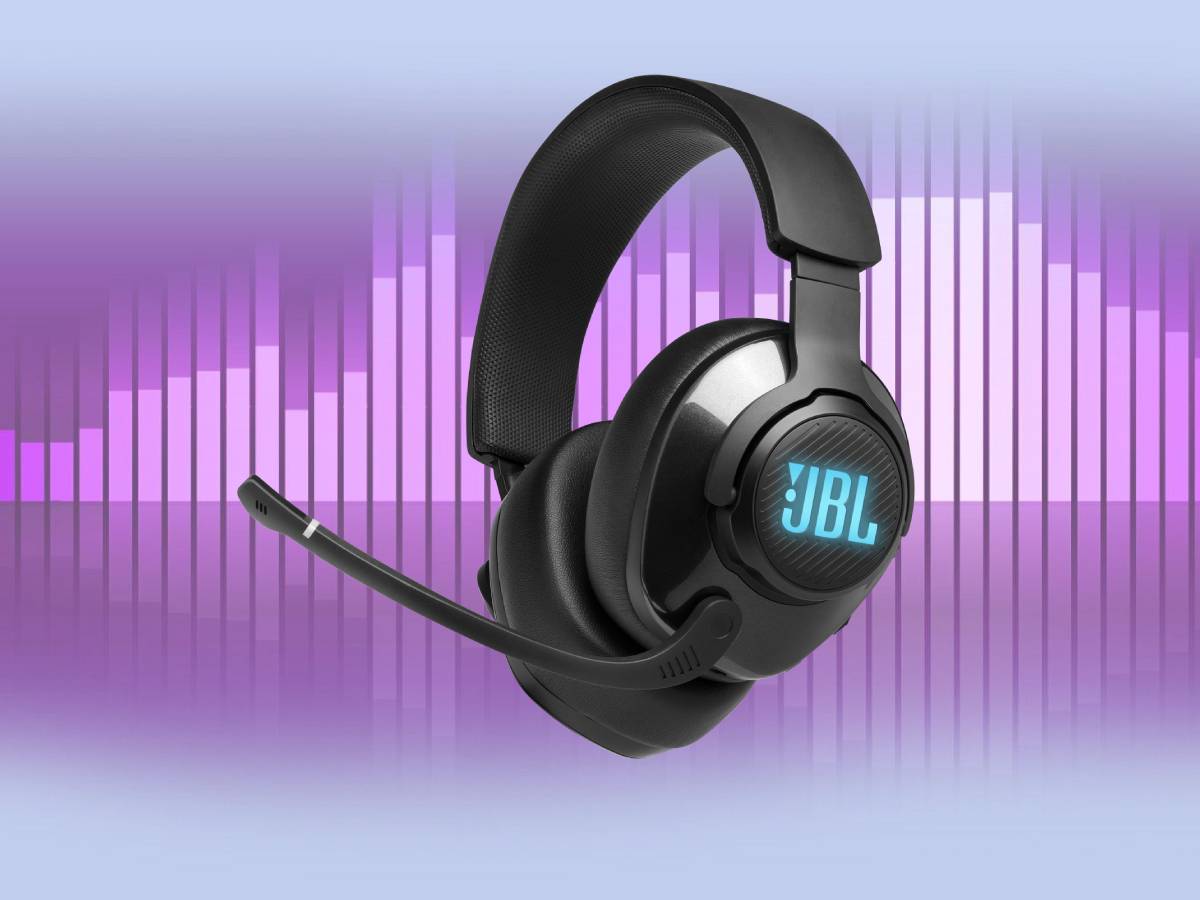 JBL is one of the biggest names in consumer audio. They recently sent me the Quantum 400 USB gaming headset, which is JBL’s mid-range headset with QuantumSURROUND sound. The JBL Quantum 400 retails for $99.95, but is currently available at a discounted price of $79.95 at both Amazon and directly from JBL.

Will this be your favorite gaming headset? We’ll take a look.

The box definitely has a striking look, which leads to good shelf presence. It has a flap that opens, revealing the helmet tucked securely inside.

When you open the box, you’ll find the headset and two separate braided cords: one with a 3.5mm plug for consoles and other gaming devices, and one with a USB connection for your computer. Both cords are nice and long, giving you some freedom despite the headset not being wireless.

Visually, the helmet is quite modest. It has a programmable lighting feature on the JBL logos and microphone, but this feature only works when connected via the USB cable.

The back of the left earcup features several controls, including an audio/game chat balance dial, volume dial, and manual mute button. The microphone will also be muted if you move the boom into a vertical position. Plus, there’s a 3.5mm jack and USB-C port for included cords.

Somewhat amusingly, the inside of the earcups has a capital “L” and “R”. These seem a bit redundant as the microphone is only usable if you are wearing the headphones properly. However, you are sure to never forget to put the helmet on correctly.

Even though the JBL Quantum 400 headset is primarily designed for use with a PC, as I said before, it can be used with other devices.

I started by connecting the headset to my Xbox Series X controller. It immediately worked as a stereo headset with microphone. Some features are not available, such as QuantumSURROUND, lighting, and custom settings. However, it worked well as a stereo headset with microphone. Headset-integrated features, such as the game-balancing dial and audio chat, are still available when using the Quantum 400 with a console.

However, it’s with a PC that the JBL Quantum 400 really shines. When I first plugged the headphones into my computer, the headphones were identified and I was prompted to install the JBL software. This software offers a high level of customization for the headset, allowing you to fine-tune sound, lighting, surround sound, and microphone settings.

You can get some pretty accurate choices if you switch to advanced mode in any of the settings. For example, with lighting, you can arrange the colors and how long each one appears before moving on to the next. Here’s an example of one of the color schemes, “Spectrum”, in action:

Overall I was getting very nice audio output from the JBL Quantum 400 USB Gaming Headset while gaming. The QuantumSURROUND effect won’t replace true surround speakers, but it actually separates the audio from a way that makes it seem like you’re getting sound from all around you. The microphone picked up my voice cleanly and clearly, which is important for communicating with my teammates on Surveillance.

I loved all the adjustments I could make using the software on the PC. If you’re an audiophile, you can really spend a lot of time tweaking the sound to your liking. And even when using it on my Xbox, the functionality of the chat/audio balance dial was obvious.

I personally wasn’t blown away by the visual style of these headphones, but since I don’t stream my gameplay, how they look isn’t as important to me as how they feel. And the JBL Quantum 400 is light and comfortable to wear. I could definitely see wearing them effortlessly through a long gaming session.

If you’re looking for an affordable, customizable, and great-sounding gaming headset, check out (and listen to) the JBL Quantum 400 USB Gaming Headset. You’ll definitely get what you pay for.

Note: JBL sent me this headset for review, but did not contribute to this review. As an Amazon Affiliate, I can earn a small commission on qualifying purchases.

Like? Take a second to support GeekDad and GeekMom on Patreon!