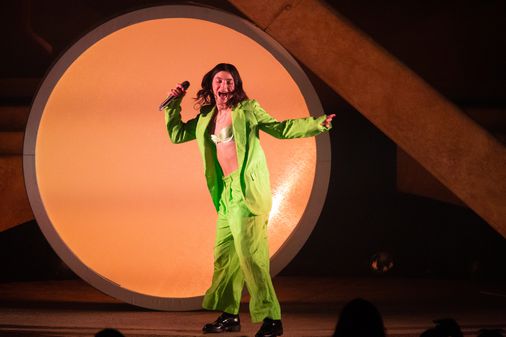 Sunny side for Lorde at Wang

It’s a little-recognized fact that most audiences are incredibly forgiving of technical issues, so when there is one, artists who freak out are only fighting against their own interests. So it’s no surprise that when Lorde’s microphone went off immediately after her opening song at the Wang Theater on Tuesday, the artist behind the beach vibes of last year’s “Solar Power” laughed, waited for him to return and left the stage for help. when this was not the case. (“Somebody help her!” a voice from the crowd shouted.) When she returned and restarted “Homemade Dynamite,” she was looser and more frisky than when she left. And the public went crazy.

Either way, Lorde has long been too curious to feel sorry for herself. Midway through her concert, the first of two at the Wang, she admitted that her main lyrical interest was “how emotions sit in the body”, and her curious eye for her own internal landscape meant those emotions weren’t ugly. or overwhelming, but hopeful and open. They didn’t sit in his body either, exactly; the fluid, pugnacious movement that served as his dance was unconsciously free and clumsy and aimless and wonderful.

His songs were also full of great feeling, providing uplift without ignoring the choppy undertow below. (“Now all my oceans have riptides,” she sang during the catchy, catchy tune that was “Mood Ring.”) The sweet plea for “Stoned at the Nail Salon” came from a position of strength, and the clubby dance beat to “Supercut” was cinematic, wide-eyed and urgent. And fueled by a propelling chorus that sparked everything that followed, “Green Light” was utterly exhilarating.

Get the Big TaskYour guide to staying entertained, from live shows and outdoor entertainment to what’s new in museums, movies, TV, books, restaurants and more.

Just like David Byrne’s recent “American Utopia,” the show was aided by a dynamic stage image from start to finish, and not just because of the spiraling staircase to nowhere that gave Lorde multiple vantage points and angles from which to sing. The seven musicians appeared in different configurations from song to song – ‘Stoned at the Nail Salon’ deserved only guitar and bass (with a third band member without an instrument perched at her feet watching her) , while only a keyboardist and drummer were on hand for “Royals” – and often disappeared altogether when not needed.

Lorde’s innate gift for art-pop and her ability to attract people rather than alienate them were clearly on display when she turned 15. It’s even more evident now, in the way the minimalistic expansionism of the songs she wrote 10 years ago fit comfortably alongside heart-pounding new tracks like “Secrets From a Girl (Who’s Seen It All)” and the sunrise pop of “Oceanic Feeling.” And as long as she maintains that curiosity about herself, she’s sure to vibrate sympathetically with the 10-year-old Lorde from now on.

With an irrepressible bounce and a definite hip-hop flow to her vocal delivery, opener Remi Wolf played with such confidence and ease that she could slow down Gnarls Barkley’s “Crazy” and make it no less fiery.