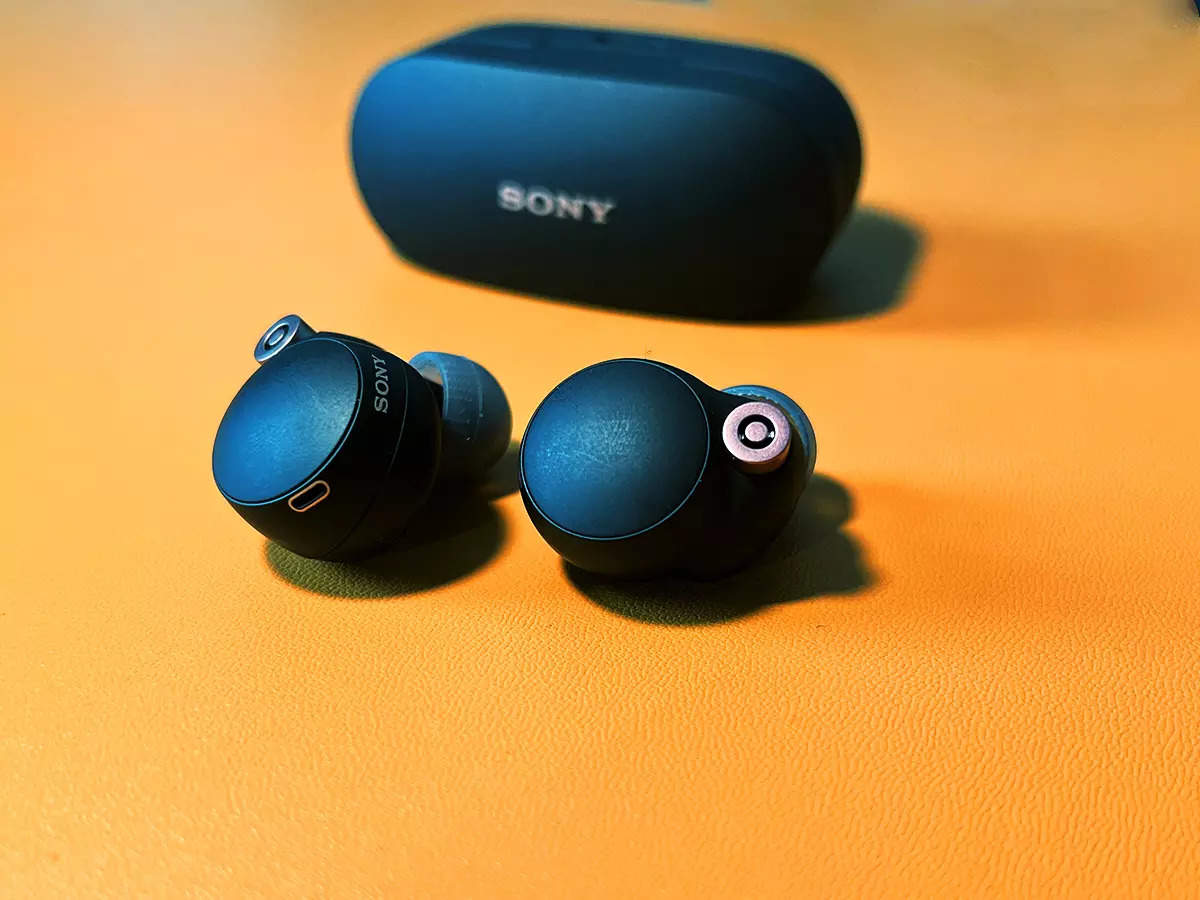 The first month of 2022 kicked off with several TWS headphone launches, but one of Sony’s most anticipated WF-1000XM4s is the first premium entry in India. The truly wireless earbuds launched at ₹19,990 and it is the direct rival of Apple Airpods Pro and others in the same price segment.

With this price, it’s obvious that these headphones are for true wireless enthusiasts who are willing to spend more to get the best available on the market.

I’ve been using the Sony WF-1000XM4 for about ten days and it has given me a lot to share. This includes some major updates for the first time and some improvements over its predecessor – the 1000XM3. I compared it to the Airpods Pro.

Let’s dive in to learn more about Sony’s latest TWS.

Smaller case, buds and hardware finish is a welcome change

Sony has cut a lot of bits from the WF-1000XM4 compared to its predecessor. The charging case would be 40% smaller and the headphones 10% smaller. This is welcome, as most competitors had this advantage over the M3, which also makes it easier to recommend to those who want a compact TWS.

The headphones provide a perfect fit and come with ear tip options for different sizes. The companion app also helps you find the best fit for your ear. I’ve tried indoor running and deliberate headbutting to see if it sticks – and it doesn’t come loose or fall off unless you go crazy. To put things into perspective, the Airpods Pro and WF-1000XM3 headphones loosen the grip after the same headbanging experience.

As mentioned, the WF-1000XM4 is much smaller and automatically makes it more compact. It’s not only smaller, but it fits better and is now more comparable to recently launched headphones due to the smaller housing and buds. The case is slightly thicker and wider than the Airpods Pro, but its height is narrower when viewed from the front. Unlike the M3, the size difference is now negligible between the two rivals.

The Sony WF-1000XM4’s headphones are plastic with a polished finish and a small copper-colored metal accent on each that houses one of the exterior microphones. The second microphone is on top of each earbud, while the third is placed inside. Lastly, these are IPX4 rated for water resistance, making them water resistant.

Sony has also made another thoughtful improvement to the design – where the WF-1000XM3’s casing got scratched after a few months of use. This time on the M4, the company has switched to a more subtle single-tone matte plastic case. It’s proven to be more resistant to fingerprints and scratches, but we’ll see more of that as we spend more time with it.

It is also worth mentioning that Sony has introduced a new eco-friendly packaging which is almost half the size compared to the previous one. It is also entirely paper-based and recyclable. A good initiative!

In terms of features, the WF-1000XM4 borrows a lot from the M3 and improves on them. It also brings some of the best features from the WH-1000XM4 (Sony’s top-end headphones) and they work great. These include adaptive active noise cancellation that adjusts based on the environment, quick pairing for Apple, Android and Windows devices, and talk-to-chat that lets you have a brief conversation without pausing the music, all you have to do is start talking.

Just like the previous iteration, the touch controls are capacitive and built into the buds. Both buds are touch sensitive, where the right one is used to play/pause, change tracks, take calls and activate the voice assistant, the left one supports mute, ANC and sound control ambient. It supports all Google Assistants, Alexa and Siri – so there are options for all users. I’m not a huge fan of voice assistants on headphones, but many users need them and the M4 does a good job, as do most high-end headphones these days. Unfortunately, I didn’t have the opportunity to test the voice assistant’s response and accuracy in noisy or crowded environments.

But the real inspiration behind Sony’s WF, WH, and WI series is its feature-laden headset app that’s polished up and feels very natural to use. It provides access to a wide range of features and controls such as adaptive sound, ambient sound, talk, equalizer, voice assistant, touch control scheme customization and many more.

Inside, the new headphones boast Bluetooth 5.2 support, compatibility with SBC and AAC codecs, as well as Sony’s LDAC codec for easy high-speed streaming. There is no sign of aptX and of course aptX HD. On the other hand, the M3 has a Bluetooth 5.0 connection and only AAC and SBC codecs.

What is the audio and noise canceling performance of the WF-1000XM4?

The WF-1000XM4 packs a new V1 processor which Sony says consumes less power. Finally, noise cancellation and Hi-Res Audio consume less power than usual. But we’re here for the sound, and that’s something Sony has been consistent with in its W series of headphones across all categories and segments. The sound of the WF-1000XM4 is like home, especially for an M3 user like me. It’s the same clean, crisp, full sonic signature that maintains the right balance of loudness and definition. As always, I listened to almost every genre ranging from Bollywood, old school rock to 90s hip hop and everything beyond and in between.

The sound stage, the details are there for noise canceling headphones. What’s always been great about the W-series earphones is that the audio frequencies aren’t changed to give importance to a particular frequency unless you’ve set the equalizer for it.

For example with
Bishop School by Yusef, it’s jazz-funk with a mix of treble, tambourine and drum percussion, passing through string and brass and flute sections. The headphones retained the right texture and great dynamic range in the highs and mids. Transition points and layers across different frequencies are smooth and can be heard distinctly. Even the bass is clear and precise in songs that have strong mids and even those with vocals.

The ANC or noise cancellation is of the highest standard and gives no chance of complaining. The only best noise canceling TWS available is Bose QuietComfort which magically silences the outside world, but that’s the one department where it excels compared to the WF-1000XM4. Not only does it cost more, but it also falls short when it comes to sound quality.

Setting up these earbuds might seem a little tricky since there’s no button on the case, but that’s not what it seems. You just need to remove the buds and put them in the ear. Now press and hold both earbuds for 6 seconds and search for available Bluetooth devices on your source device.

Once you pair it with a device, it will automatically connect to it every time you open the case and use it. The pairing speed is fast and in my experience it hasn’t failed once. But this is something that changes over time as my WF-1000XM3 started showing these issues after 1.5 years.

Microphone performance was impressive for calls and voice assistants. Although it is good for indoors, the quality tends to drop when there is wind or noise in the background. I haven’t had a chance to try it in a bus, subway or office, but for the rest it’s good enough to do the basic job.

The Sony WF-1000XM4 can last just over 7 hours and 30 minutes per charge, and the case can charge the buds at least twice more for a total of a hair’s breadth under 24 hours. It’s not the best battery life we’ve seen from truly wireless headphones, but there’s a lot going on under the hood here and it’s a pretty good back up.

A good premium TWS should excel in three areas: noise cancellation, audio performance, and battery life. There are better options for each of them individually, but where the WF-1000XM4 excels is in balancing all three with a bonus of features that make it more user-friendly. It’s a good choice for travel, the office, and even for video calls. It’s the go-to option for those who need the best of three and don’t mind paying a premium. Its comfortable design, waterproofness and companion app add real utility to the product. Customization options for audio and controls ensure that it adapts to your comfort, whereas in most cases you are the one adjusting to a new gadget.

Baidu, Tencent, Alibaba and others are accelerating the installation of car ecology in vehicles

Synaptics will report its second quarter fiscal 2022 results on