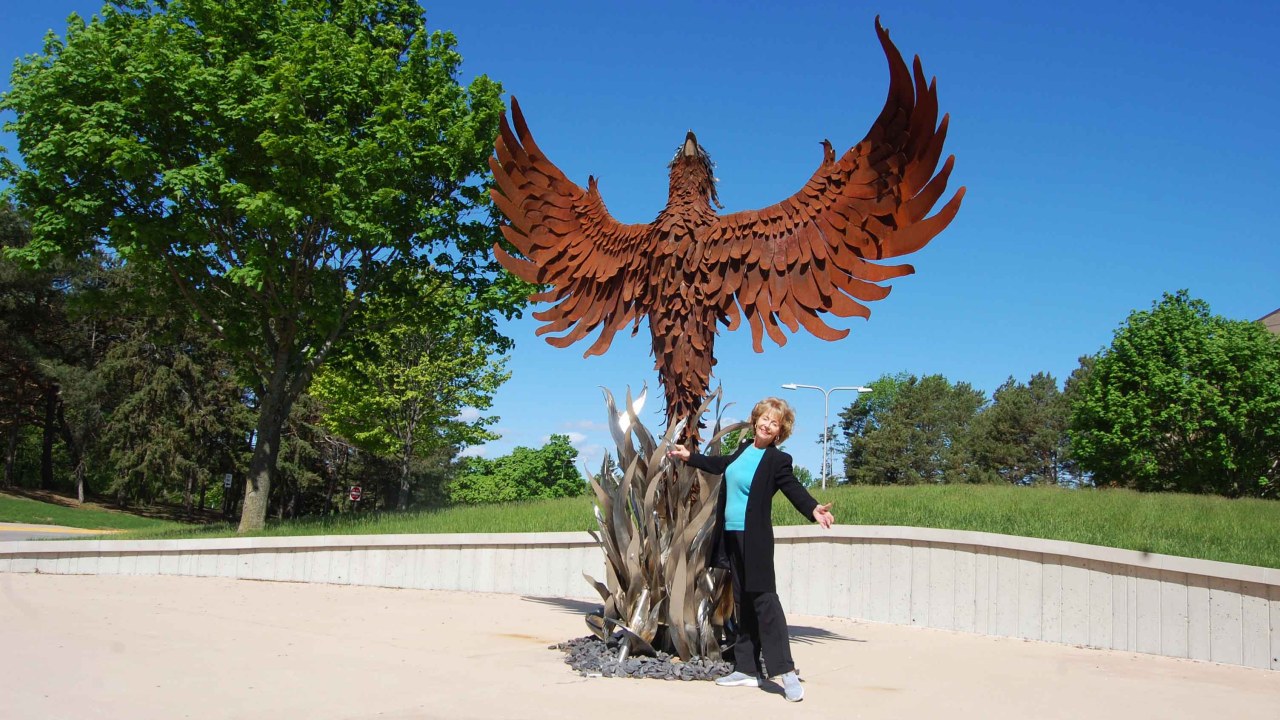 Something new and great in the arts

What happens is worth 76 paperclips and a grand parade – like in the song from the musical “The Music Man”.

A woman who once starred in a troupe that was hosted by 76 trombones and the man behind the music himself – show creator Meredith Willson – are instrumental in the huge project.

A music institute is being established at the University of Wisconsin-Green Bay in the name of Sharon J. Resch.

Fellowships of four years and more are part of the commitment.

It is likely that there will be more activity in the classrooms and rehearsal spaces of the fine arts building and the university theater hall.

And then there are the formidable structures and performance spaces of the Weidner Center for the Performing Arts just across the street.

Sharon Resch says she wants to offer talent in our region the opportunity to embrace the journey she has enjoyed in performing and creating.

Her performance background includes ballet and famous shows such as “The Music Man”, which happens to be in revival on Broadway.

One of her favorite photos of many from her career at her husband and Richard Resch’s home in De Pere is from ‘The Music Man’.

In the photo, she stands beaming next to Harold Hill’s character in her role as Zaneeta Shinn, the mayor’s daughter.

Sharon Resch has many colorful stories to tell.

One is about her marriage to Minneapolis Central High School classmate Richard Resch — met again at a class reunion — which led her to Green Bay and substantial involvement in the arts and organizations. community.

She has choreographed for productions by the influential St. Norbert College Music Theater for Dudley Birder and Green Bay’s beloved Pamiro Opera Company for Miroslav Pansky.

Its reach extends to an international singing competition held in Green Bay.

For the Sharon J. Resch Institute of Music on the UW-Green Bay campus, the Resches are donating $5 million.

The university sees the institute as a game changer – and it is part of a larger campaign to improve more facets of the campus.

The fundraising goal is $20 million for the “Ignite the Future” campaign, which the university says is halfway done.

Sharon Resch adds the color of personality to the project.

An element of showbiz comes naturally when she is asked to pose for photos for this article.

Pictured above with the steel phoenix sculpture, the sha-zam! came automatically.

Sharon Resch is a Minnesota native, trained in dance in Chicago, and entered “The Music Man” on an open call tryout after talent at Equity made their bids.

Audiences in cities such as Chicago, New York, Las Vegas and Los Angeles have seen her perform in various productions.

She was even a stand-in for a time on “The Carol Burnett Show” TV show.

One of his most beloved relationships is that of “The Music Man”. Also in a photo of the cast on the far right is Gildo Dinunzio, who became pianist for superstar tenor Luciano Pavarotti and longtime assistant conductor of the Metropolitan Opera in New York.

Gildo Dinunzio will return to Green Bay in October to be one of the judges for the American International Czech and Slovak Voice Competition (https://www.uwgb.edu/voicecompetition) of which Sharon Resch is a notable producer and benefactor.

Advanced singers come from near and far for the competition which has a complex history. In the mix are consulates and embassies and connections between Canada, America and the Czech Republic, even a bit of Russia. A friendship with Sarah Meredith Livingston of the UWGB Faculty of Music is a major bond for Sharon Resch, whose birth name is Chmel.

In a way, Sharon Resch is an ambassador for dance, music, America, her heritage, the UWGB, musical theatre, local community organizations and young talent.

She says she is committed to giving young talents the opportunity to follow adventures close to her path.

The word “institute” is important to her. There are schools, then the above steps are institutes in his way of thinking.

Sharon Resch says Michael Alexander is significant in his commitment to the UWGB, being acclimatized to music and the arts before becoming Chancellor at the UWGB. A sympathizer, perhaps.

The “Ignite the Future” campaign was announced on May 2. Eleven priorities complete the whole:

Sharon Resch’s involvement was highlighted during the announcement.

“Sharon is a shining example of how philanthropy can change a community,” said Mark Murphy, Green Bay Packers president and campaign co-chair.

The $5 million gift from Richard and Sharon Resch includes an endowment for scholarships and funds for a new audio production facility, the Richard J. Resch Audio Production Studio.

One of the Resches beliefs is that music and engineering go hand in hand.

Sharon Resch says, “With technology as it is today, engineering students should be required to take a music course, as it hones your skills in listening to scales, sharps, flats, and that makes you a better engineer.”

Flashback: Sharon Resch won a Ford Foundation Scholarship for the Arts and enrolled at the Illinois Institute of Technology. She studied for a math degree in the mornings, took dance lessons in the afternoons, and danced at the Chicago Opera Ballet in the evenings.

“It was perfect,” she said. “I had a lot of education”

She knows math and music and dance and musical theater and the stories are filled with equations.

Sharon Resch has a vision for the institute. Here are some of his thoughts:

“Over the next decade, UW-Green Bay will become a premier destination for arts education, performance, and entrepreneurship, while creating educational pathways for underserved and unrepresented members of our communities.”

“Beginning this fall, UW-Green Bay will offer four-year, fully-funded scholarships to promising music students. These scholarships will not only help attract the brightest talent and potential to the region, but they will also enable students with limited financial means to achieve the dream of a college education.

“(C)kids who once thought higher education was unattainable will soon perform on stage at the Weidner Center for the Performing Arts.”

“(L)institut will also train students in the technical applications of music and how to combine these in-demand skills with innovation and entrepreneurship. With this goal in mind, UW-Green Bay is currently planning the construction of the Richard Resch Recording Studio, a brand new state-of-the-art recording facility adjacent to the Weidner Center for the Performing Arts. This facility will serve as a thriving laboratory for audio production majors and a creative hub for our diverse community partners. »

“A love of the arts and career preparation” is important as part of “meeting our region’s employment needs”.

“(The) institute will produce graduates who can both dream big and find employment in one of the many local industries with audio production needs, including entertainment, voice-over production, commercials and video d business, and work in our many media. exits. ”

Keep in mind that the music institute is one facet of the 11 priority list.

The institute promises to get a lot of interest from someone who has connected to Green Bay since 1985 as the wife of KI President and CEO Richard Resch.

“I thought I could come here and try it out,” she said in an interview. “I got married here at First United Methodist Church. He had four kids who were still between 10 and 12, 15 and 16… It was fun, and all I knew how to do was make appetizers. I said, “Hey, I like Doritos with cheese for dinner.”

Along the way, Sharon Resch has met – and collaborated with – leading figures in the performing arts scene.

In this role, she generated some press.

For Miroslav Pansky, she choreographed, among others, the 1998 Pamiro Opera production of “La Bohème”. Musicologist Terence O’Grady’s review for the Green Bay Press-Gazette said, “Sharon Resch’s choreography was clever but natural.”

For Dudley Birder, she choreographed, among others, the Music Theater of St. Norbert College’s 2009 production of “The Music Man.” My review in the Press-Gazette said her choreography “tests a lot of people with abundant movement.”

This abundant movement leads to my end, another story related to “The Music Man”.

Sharon Resch remembers traveling with the show company from Chicago to Los Angeles on a train. “It was madness with the dancers, the bunks, drawing the curtains on the second level, and the dancing boys were everywhere.”

The show’s opening song captures the rocking rhythm of a train in the era.

“When we got off the train, there was Meredith Willson with 76 paperclips. It was a long trip, and then it happened. We just loved it. It was so awesome.

And so another journey begins.

Producing on ‘The Great’ Helped Her Find Her Voice – Deadline