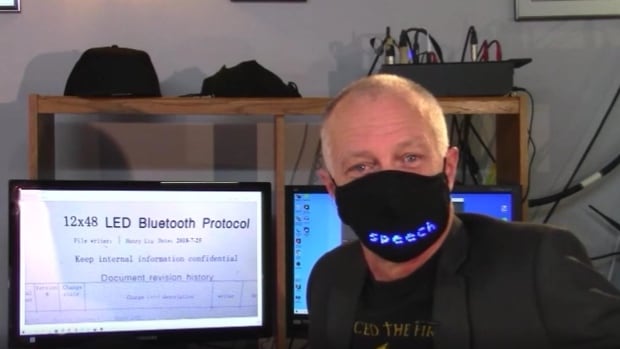 A Saskatoon man is pursuing a project he says could help people, especially those with hearing loss, communicate while masked.

Brian Kendall described it as a “cloth mask with [a small] Built-in LED display… and we use speech-to-text, then send it bluetooth “to the mask screen. It is powered by a lithium battery.

He has developed a prototype, but it is slower than the end product he plans to produce. He expects his end product to display the words instantly when you say them on a mask or hat.

“I don’t think the plexiglass or the masks are going to go away anytime soon, I think we’ll be wearing them for a while,” he said.

Kendall said his previous entrepreneurial efforts were affected by the COVID-19 restrictions, so he turned to solving a pandemic issue.

“I am taking care of my dad in a nursing home and have noticed that a lot of older people have difficulty hearing through plexiglass masks,” Kendall said.

Kendall said her dad, who has dementia, would have difficulty hearing during their conversations, but could more easily read the words.

He considered a microphone that would amplify vocals, but found it to be too loud. Then, as Kendall searched for Kickstarter, he saw a mask that would display a smile as the person spoke.

“What if I could make my voice see on this screen?” ” he said.

He started working on his idea in March. He found suppliers and tested computer chips to make it affordable, he said.

“I don’t have a big factory or anything like that, it’s more done myself in my home office [doing] what everyone had to do. We all had to go home and find a way to bring our products to life, ”Kendall said.

He had almost completed one version of his product, but found another computer chip that would allow him to make similar products like laptop badges and desk signs.

If his final version takes off, he thinks people could get their hands on it as early as February.