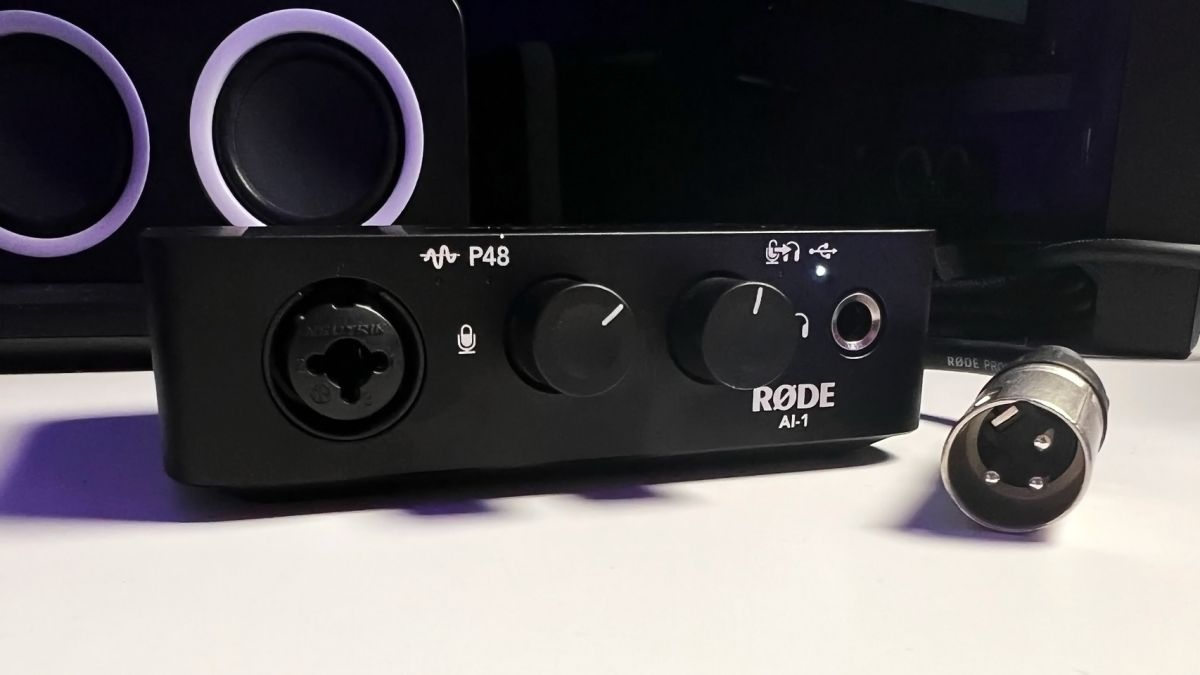 RØDE audio gear has been commonplace in professional studios around the world for over 50 years and now the Australian brand is looking for a place in your home studio too.

Costing you around $100/£100, the RØDE AI-1 Audio Mixer is mid-priced, but promises high-end performance in a streaming setup for gamers. A perfect partner to their excellent Podmic dynamic microphone, if you’re looking to upgrade from a USB microphone to an XLR setup, the AI-1 is definitely worth considering.

Just like the rest of the RØDE range, everything about the AI-1 feels premium. It’s a small, one-unit stealth bomber with an all-metal matte black case adorned with RØDE’s signature gold dot inlay.

It’s the little details that make all the difference here and make you feel like you’ve gotten your hands on professional gear. The RØDE logo is etched into the top, the base is rubberized to keep it from sliding around your desk and there’s a single subtle LED to indicate levels and peaks.

The I/O layout makes sense with a single XLR input on the front alongside a ¼” headphone jack and the USB Type-C and speaker outputs on the back. You’ll also find two control buttons on the back. the front and while it’s odd to highlight such a basic component, they’re just a pleasure to use, there’s a really nice resistance to both, which only adds to the premium feel , it also performs a function by helping to prevent accidental level changes.

The interface’s small footprint is both a blessing and a curse. It’s such a compact block that everything feels pretty tight together. The level buttons are side by side in the middle and are so close together that when I grabbed either button on the side, my finger constantly touched both at once. Of course, the problem is easily avoided by just grabbing from the top, but in the middle of live streaming, that’s another thing to think about. I can’t help but think the buttons would have been better placed on the outside with the connections in the middle.

Performance-wise, I can’t fault the RØDE AI-1, but there’s not much to excite either. It’s your convenient set-and-forget solution to who wants to hide in the back of your desk.

Unlike competitors like the Razer Audio Mixer or Go XLR Mini, the RØDE AI-1 doesn’t want you to mess with it. There are no interactive mute or censor buttons, there are no dynamic volume faders, and there is no customizable RGB. It’s a bridge between your microphone for streaming and your PC and it’s happy to be just that.

That’s not a bad thing though, and it’s definitely worth sticking to getting the basics right. Once you hook up a mic, the RØDE AI-1 is capable of delivering studio-quality audio up to 96kHz, which is more than enough for most streamers. Either way, Twitch only supports 44.1kHz or 48kHz sample rates, so the AI-1 isn’t going to sweat to keep up with your content.

There is also no real software offering from RØDE to complement the AI-1. Although you can download the ‘RØDE Central’ app, it offers little more than checking for firmware updates, so it’s not something you have to run to install. It’s actually a welcome relief to have a plug-and-play device that’s truly plug-and-play. The Razer Audio Mixer needs its Synapse offering to get you started, but the RØDE AI-1 was ready to go seconds after I first plugged it in.

In testing, I found no noticeable difference in sound quality when switching my RØDE Podmic between the AI-1 and the Razer Audio Mixer, including with Razer Synapse’s smooth post-processing offering enabled. . The AI-1’s sound was crisp and clear, free of distortion even when increasing gain levels and required no EQ work to deliver pleasing results.

Overall – Should You Buy It?

Switching from USB-driven audio to an XLR setup can be a costly decision, but fortunately the RØDE AI-1 offers creators a studio experience without the high price tag. As audio mixers work, it’s as close to plug and play as it gets, a single setup should keep you happy for a long time.

Yes, there are more feature-rich offerings on the market like the Razer Audio Mixer, but they come at a price to match. Purely as an XLR microphone connection to your PC, the RØDE AI-1 is an excellent choice with few flaws.

Complete your streaming setup with one of the best capture cardsand the best webcams.

Control your computer using your mobile or tablet