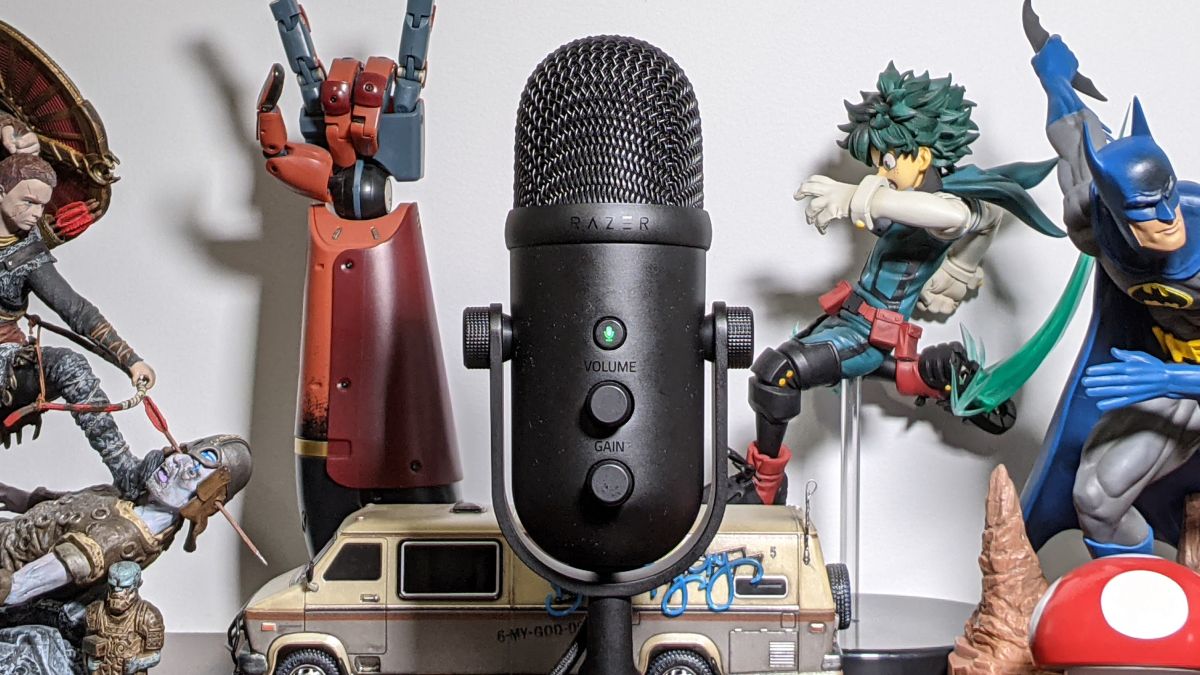 You would be hard pressed to find any of the best usb mics it’s not a Blue Yeti, but Razer just released the Razer Seiren V2 Pro in hopes of turning the tide. So how does this stack up? Unfortunately, not very well.

Make no mistake, I love that the Razer Seiren V2 Pro has USB Type-C connectivity in a sleek design. It also looks decent after tinkering around, lets you monitor your mic through an app, and comes with a windshield.

However, the sound is not comparable to that of the Blue Yeti X, and the software is not as useful. And these problems are all the more glaring when you see its price tag of $ 150. Not to mention that plugging in the microphone gives the impression of transmitting a virus to your PC when it submits more than 10 I / O.

Overall, the Razer Seiren V2 Pro is a decent microphone, and I would even call it a good one if not for the price of $ 150. Until you see a 50% reduction, I would avoid it.

All in black. The Razer Seiren V2 Pro is a cute, short, chunky microphone that has a sleek black bezel, microphone grille – even a blacked out Razer logo. There are two knobs, one for volume and one for gain, both also blacked out. The only part that stands out is the mute button that sits above the buttons, which lights up green when the mic is hot and red when muted.

For the price, I was hoping to see LED indicators for gain and volume, but there aren’t even notches to give you the subtlest idea of ​​what you’re changing. Those buttons are pretty much useless –– you might as well do everything in Razer Synapse.

On the other side of the microphone is a headphone jack for monitoring and a USB Type-C port for power. The Type-C port is elegantly designed so that the cord is flush with the base, giving it a clean look.

The Razer Seiren V2 Pro comes in three parts. Two of them are already attached out of the box: the microphone itself and the arm that connects it. You can attach the arm to the included base (the third piece) or attach it to a pole arm. You can remove the arm by unscrewing the knobs to the left and right, leaving you with just the microphone, which has a 5/8 inch thread at the bottom.

The Seiren V2 Pro’s 30-millimeter dynamic cardioid microphone had a lot to deal with beasts like the Blue Yeti X. However, I wasn’t impressed with the Razer Seiren V2 Pro, and neither were my colleagues.

When I switched from my Blue Yeti X to the Razer Seiren V2 Pro, my two coworkers started to criticize the sound, stating that I sounded distant and resonant. One of them said my voice was flat and lacked depth. Eventually I set up the microphone with more optimal settings and then brought my coworkers back to a call with me. I have a “it sounds good now, but the [Blue Yeti X] is better. ”I lowered the gain to 60, maximized the sample rate, and pointed the top of the microphone towards me.

Finally, I used the microphone with the Audacity software to hear what I really sounded like. I noticed quite a few problems. Using the Razer Seiren V2 Pro on my desktop was not a viable option. I looked too distant, but when I increased the gain I was too strong. So I attached the microphone to my boom and pulled it closer, and the sound was surprisingly good at that point. However, it took a lot of work to get there, between tinkering with the settings and setting up the pole.

While the Razer Seiren V2 Pro made my voice clear, there was definitely a lack of depth and it didn’t capture the full range of my voice. I didn’t feel like I was fully present, which is a problem if you’re trying to connect with an audience. The Blue Yeti X costs just $ 15 more and its audio is miles away from the Razer.

For better or worse, you’re stuck with Razer Synapse software, just like with most Razer products. The software could be better, and it has bothered me too many times.

With the Razer Seiren V2 Pro, you have two tabs: Mic and Stream Mixer. In the first case, you can adjust the gain, headphone monitoring, sample rate (44.1 kHz, 48 kHz, or 96 kHz), high pass filter, and analog gain limiter.

There’s a lot more to the Stream Mixer tab, which lets you manage the output and input of multiple channels. It was difficult to understand everything. But this tab controls what you listen to and present to the world, whether it’s the Stream Mix version of the sound, or the raw microphone, or an entirely different channel.

It’s frustrating because the Razer Seiren V2 Pro creates more than 10 inputs or outputs on your PC, and navigating them is a nightmare. I will say, however, that I like how easily you can monitor the microphone through the app.

At the end of the line

The Razer Seiren V2 Pro is a good microphone, but it’s not worth the extra Razer tax the company is trying to get away with. There are a lot of pros and cons to this mic, but in the end it sounds great after tinkering with it, which is most important. However, don’t spend $ 150 on this microphone when you can buy a better one for about the same price.