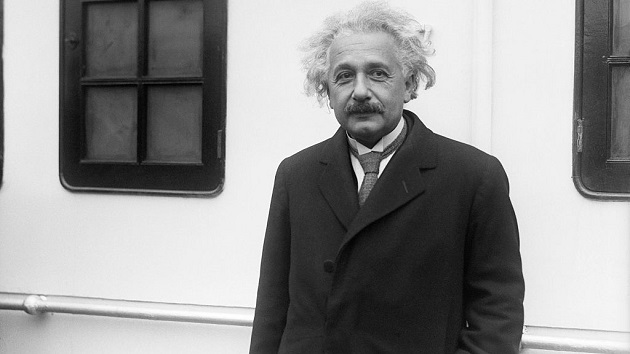 (LONDON) – A rare Albert Einstein manuscript that changed the course of modern science has just been sold for more than 13.3 million euros (over $ 15 million) including fees, exceeding all predictions.

The 54-page handwritten document describes the calculations that led to his theory of relativity. One of the two existing copies went on sale Tuesday evening at the Christie’s auction house in Paris. It was expected to make between $ 2.4 million and $ 3.5 million. The manuscript was sold as part of a judicial sale and had to be processed by a special judicial commissioner. It was bought over the phone by an anonymous buyer.

“It is without a doubt the most valuable Einstein manuscript to ever be auctioned,” Christie’s said in a statement ahead of the sale.

The iconic German physicist co-wrote the manuscript with a lifelong friend, Swiss engineer Michele Besso, in Zurich from June 1913 to early 1914, according to Christie’s, who is arranging the sale on behalf of the auction house. Aguttes.

Although this copy is not the final version, the Einstein-Besso manuscript shows the trial and error that went into the calculations. When the equations for the relativity of rotational motions were found to be correct, Einstein enthusiastically wrote in the margins of one of the pages, “Stimmt!” It’s German for “it works!” “

Although the document contains errors, it ultimately led to Einstein’s General Theory of Relativity, which states that gravity is not a force occurring between objects in space but rather a deformation of geometry. of space and time. The final theory was published in 1915, about a year after the Einstein-Besso manuscript.

The manuscript consists of 26 pages of Einstein’s handwriting, 25 pages of Besso, and three pages that appear to have been written together. Parts are crossed out or torn off, and the pages have rust stains, according to Christie’s, who described the document as describing “a crucial step in the development of the general theory of relativity.”

“Even today, in 2021, when we study cosmology, or even when we study the fusions of black holes, gravitational waves, pulsars, we still use Einstein’s equations”, explained the French astrophysicist. Etienne Klein in a video on the Einstein-Besso manuscript, published by Christie’s before the sale. “More than a century after being written down by Einstein, they are still the correct equations to describe any gravitational phenomenon.”

Einstein and Besso met at a concert while they were both students at the Swiss Federal Institute of Technology in Zurich, where Einstein studied physics and Besso engineering. Friends for life, Besso described their collaboration as a collaboration between an eagle (Einstein) and a sparrow (Besso), claiming that the sparrow could fly higher under the eagle’s wing, according to Einstein’s biography of Carl Seelig in 1956.

Einstein, who won the Nobel Prize in Physics in 1921, was known to have destroyed most of his work. But Besso kept the manuscript for posterity.

“A good scientist is someone who makes mistakes, finds them out, and corrects them,” Klein said in Christie’s sales catalog.

Sights & Sounds of Christmas returns in 2021