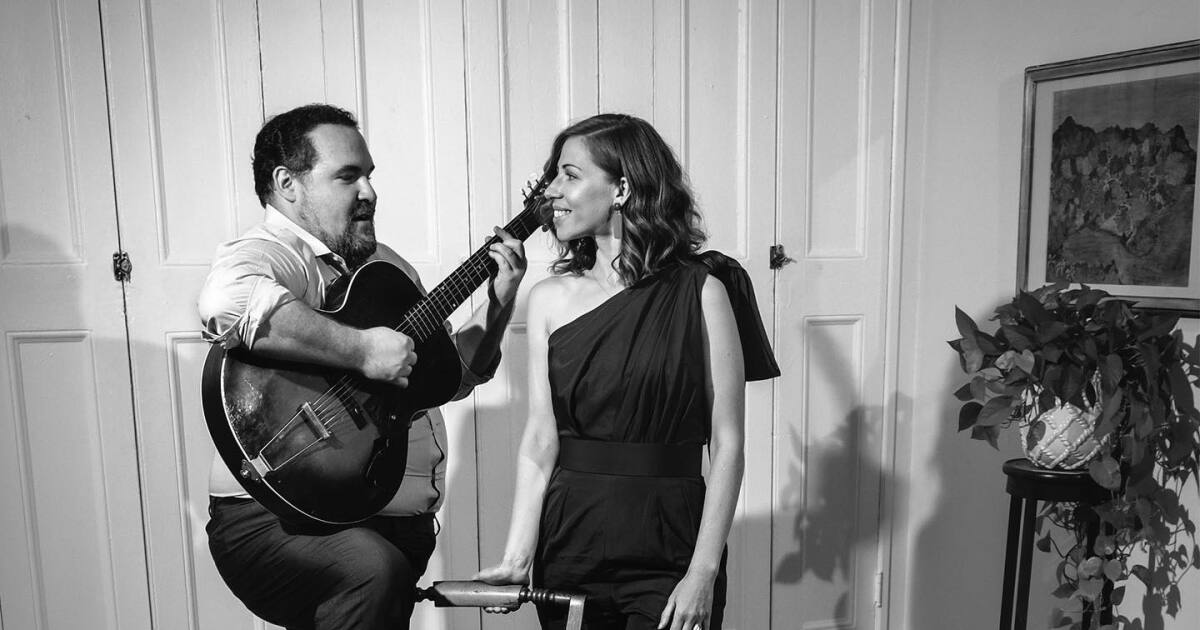 If it’s possible to add a few new chapters to the Great American Songbook, Rachael & Vilray are hard at work on it.

On their self-titled debut album, Rachael and Vilray showcase their close harmonies, clever songwriting, and a different side of Rachael Price that many fans have heard in her band Lake Street Dive.

Rachael and Vilray will perform two concerts in our listening area this weekend, Saturday at Caramoor in Katonah and Sunday at the West Kortright Center in East Meredith.

How did you start working together?

Vilaray: Rachael and I met in college and became friends. But we really haven’t made music together for many years. She was a serious and devoted musician. And I kind of walked away from the school where we were together and got a job in New York where I’m originally from, and where I live now, where we both live now. And she kind of brought up the idea of ​​us playing together at some point late in our friendship. We had been friends for many years at that time. And I kind of rejected it. I didn’t really make a lot of music. And she was pretty stubborn about it and finally gave in.

Rachel: Yes, I really must have exhausted it. I will say that the first time we got together to play songs was quite awkward. There wasn’t a ton of energy. And I think we were both humbled by that experience and just decided to be friends after that. Silently. You know, we haven’t talked about that. Do you remember that, Vilray?

Rachel: Yes exactly. And I heard Vilray sing a solo in Brooklyn and I just felt like it was time to ask again.

What was so humiliating about that first time? What were the circumstances?

Rachel: We were at Vilray’s apartment. And I think we… we didn’t really know what to do, like what songs to do together.

Vilray: I was rusty. I hadn’t really played music in years. And Rachael said, Well, you know, you’ve listened to so much music and you’ve played it once. Let’s try. And I just wasn’t ready. It took another few years before I somehow rediscovered the bug on my own. And then we were able to find the swing.

I read, Vilray, that you had at some point a broken hand or a broken arm which prevented you from playing the guitar?

Vilray: Yeah, you know, I mean, what really stopped me from playing guitar was some kind of embarrassment that I kicked out of music school, and that turned out to be more mainstream than I thought when I was 19. me to make music for a long time. And then I started playing music a little bit here and there, but it actually broke my finger, it wasn’t my whole hand. But I was in a cast for a month or two. And there was something about not having the option that really, you know, kind of terrified me, scared me, and made me think about music before I even walked out of the cast. So yeah, it was kind of an inspiring moment.

Did all of your skills return once the cast came out? Or did you have to relearn how to play it?

Vilray: Yeah, no, it wasn’t a huge physical trauma as far as the hand was concerned. It was more just kind of a throwback to the feel of making music. I studied composition and songwriting at the New England Conservatory, where Rachael and I met, so it has always been my goal to write music. The guitar is in a way a means to an end. So my janky guitar playing skills came back as soon as I started practicing.

And Rachael, why did you want to do this kind of music together? What was it about Vilray and you getting together in this mode?

Rachel: I grew up singing jazz and when I went to jazz school and played with a trio for many years singing standards, and when Lake Street Dive started to take off, I kind of put that aside and I wasn’t singing jazz anymore, and I missed that. And when I saw Vilray perform that night in Brooklyn, what really struck me was that Vilray wasn’t performing any standard, so to speak, any very familiar songs, he was performing more obscure songs from the 30s and 40s.

And one of the hurdles, I think, like making this music and doing interpretations of it for myself, is just how many versions of these songs there are, and therefore knowing how the audience has different connections and different relationships with the songs depending on which version they grew up listening to and myself, and the pressure of wanting to sing in that style, but to make it different. And really, I think all I wanted to do was just sing in the style of singers from the 30s and 40s, I never really wanted anything different from the experience of that. And so when I saw Vilray do it, I realized it could be done if you were doing songs that the audience didn’t know very well. And so when we started playing together, I think he only had one original to offer. But even that in itself was exciting, because then I was able to perform a song that no one had heard before. And then we were doing obscure songs, and then he just kept writing and writing and writing. And so to me, it’s like a dream scenario, because that’s what you want as a singer is to have a talented writer writing songs for you. So I got it all figured out in the end.

And Vilray, what attracts you to this era and this particular style? I know these are new songs, but I think the near timelessness of your songs is part of their appeal.

Vilaray: There’s something about the breadth of emotion that the songs explore, they kind of come from, whether they’re written for musicals or not, they come from the tradition of musicals. So you know, there’s a funny scene, and there’s a duet, and there’s a love song. And there’s kind of a light, company-wide song, and there’s just all these kinds of traditions. And you can kind of plug in those songs, whether they’re songs from a musical, or as they call them, art songs, they kind of fit the groove of a certain dramatic space. And it’s kind of nice to be able to occupy, you know, deep pathos, and, and kind of melodrama and also, you know, a lot of humor, I have, I’ve always loved writing humorous songs, and I’ve always loved listening to comedic songs and, you know, the Beatles, and Bob Dylan and all these sorts of great songwriters of the rock ‘n’ roll age, were really in touch with a lot of that humor, and I’ve always enjoyed it very much. Sometimes I feel like people take themselves a little more seriously these days. And I don’t like writing autobiographical music so much, I’ve never really excelled in that world. And it’s kind of nice to occupy a character’s space and see what that character has to say.

Could you two talk about what it’s like to sing these songs together? Because vocals need to be incredibly accurate. You accompany each other so well, but it’s also, you know, quite complicated lyrically and so on. How do you manage to get to the same page, so to speak?

Rachel: Well, I think we got lucky. Because Vilray and I have individually spent a lot of time listening to the tonal quality of singers from the 30s and 40s, there’s a certain way they approach a note and where it’s in your face, how it resonates. And vibrato is a certain type of vibrato. So I think initially we were able to mix because we studied how these singers sang, which doesn’t mean it was perfect. When we started, it took us a little while to be able to sing along with each other. And I think we understood after about a year of performing that we had to face each other and look at each other for a while. And there was a period where we intensely, I think, stared at each other’s mouths as we sang. And naturally, we kind of stopped needing to. And we were more in tune with each other just by listening. And even now, I think when we haven’t played for, you know, a few months, we started singing again and we’re kind of shaky, and we kind of understood again.

I noticed there were times in your live performance where you shared a microphone. Is that still the plan for you to be so close?

Vilaray: Yes, it kind of depends on whether or not it’s an indoor outdoor show and the type of venue. But, you know, it’s a tricky thing, those ribbon microphones and an outdoor performance can sometimes trigger it. So it depends more and more. But we really like having a ribbon microphone between us and self-balancing. It’s really a kind of human and organic experience.

I know this can be a tricky question. But do you have a second album coming soon?

What can you tell us?

Rachel: We recorded in April. And we did it in Los Angeles, with a lot of amazing musicians in an old studio in a huge hall. And we did it with the same person who produced our last record. And it’s coming out next year. We are very excited about this. If we could post it sooner, we would.

Do you think about writing specifically for Rachael when working on the songs now that you have this story together?

Vilaray: You know, it took me a little while to gain the confidence to feel able to write for Rachael, which is strange to say, since I was writing for Rachael, whether I was writing for her voice or not. . But yes, more and more in recent years. Instead of sitting and thinking oh, how would Ella Fitzgerald sing a song or how would Fats Waller sing a song? Because that was kind of the beginning of the way I was sitting down and writing, it was kind of thinking about the voices of that time. And I think that allowed me to have some precision in what I was doing, but more and more I think of Rachael and yeah, it’s a wonderful experience to think about what she would do and then d hear how she does it. There’s always a million and one things I never would have expected and she blows it out of the water. And it’s wonderful to have her sing a song the first time and then it’s really amazing to hear her sing the song the 100th time because, you know, she understands things every time and I get a seat before for that. So it’s a wonderful experience for me.