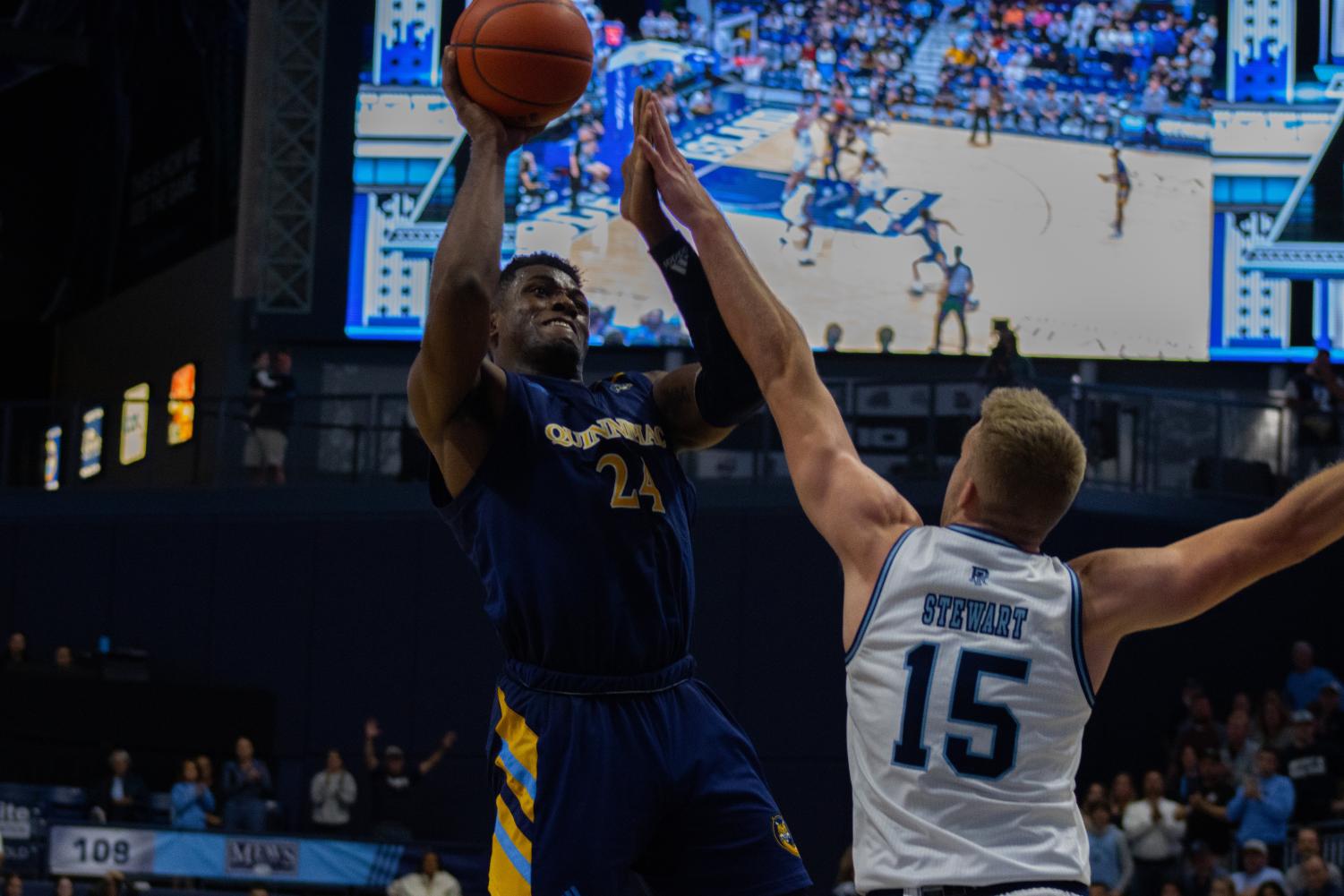 KINGSTON, RI — In an atmosphere that rivaled some professional arenas, the Quinnipiac men’s basketball team slammed the door to the Ryan Center and the Rhode Island Rams. Led by graduate transfer forward Ike Nweke, the Bobcats managed to silence the crowd and claim a 67-62 win on Monday night.

In March, URI hired Archie Miller to be the 21st men’s basketball head coach in school history. In his first game on the sidelines for the Rams, the hosts played well, but the lack of experience was evident in the team’s late-game struggles.

Nweke and junior forward Paul Otieno both got the nod from the starting lineup on their Quinnipiac debuts. Using the two big men helped the Bobcats play hard in the paint, and while the Rams led the game in rebounds, it was the 6-2 three-point differential that played a vital role in the win. .

Quinnipiac head coach Baker Dunleavy praised how his newcomers adapted to a new system after the game.

“A learning and growth mindset, an openness to being coached,” Dunleavy said. “A guy like Ike Nweke… kept us in the game in the first half with his offensive rebounds. I think those guys really bought into it.

Nweke recorded a double-double in his Quinnipiac debut, dropping 13 points and 11 rebounds, replacing the now-grad Kevin Marfo beautifully, who seemed to be posting similar numbers every night. On the other end, Rhode Island boasted redshirt freshman hitter Abdou Samb, who filled the stat sheet, tallying eight points, four boards and a ridiculous block that sent the Ryan Center into a frenzy.

Going into the first half, both teams were fairly even on the glass, an expected occurrence as they each started the game with big line-ups. As expected, the Rams and Bobcats were physical to start the new season, racking up four fouls apiece in the first six minutes of play.

Quinnipiac was able to claw back some key contributors after missing the end of last season. Redshirt senior guard Savion Lewis, who tore his Achilles tendon in December 2021, played a key role in the Bobcats backcourt. Lewis was able to send the ball along the perimeter early and often, usually finding other guards like Matt Balanc senior in red shirt and Dezi Jones junior.

“(To) win a tough game they came back, it seems like in the past we may have collapsed,” Balanc said. “This team has the players and the talent to toughen up.”

The second half wasn’t the start the Rams were hoping for as they walked out of the locker room. Rhode Island began to struggle on the field, only managing one shot in the first five minutes. A 9-0 run by the Bobcats helped extend their lead to 10, Quinnipiac’s biggest of the night.

With just over 10 minutes left in regulation time, Balanc was on the losing side of two costly games, both leading to buckets for Rhode Island. That capped off what was an 8-0 run for the Rams.

Balanc, an ultra-athletic guard who was unanimously named to the All-MAAC preseason 1st team a few weeks ago, tended to struggle late in games last season. This year? Both Balanc and his teammates have the same mentality about closing games, as noted on Monday.

“Teams in the past were attack-oriented, we have to focus on defence,” Balanc said. “(When) we have turnovers, it changes our team. At times like this, you have to lock yourself in.

Although the Bobcats had some foul trouble early in the second half, their ability to adapt on both sides of the ball is a testament to Dunleavy’s charismatic coaching style and the depth of this Quinnipiac team.

“We showed great courage, obviously not great poise,” Dunleavy said. “We have really resilient players…it’s a great moment for us to go and win a game in this situation.”

Near the end of the game, almost everyone in the arena was on their feet as critical free throws from Thomas and Leggett helped cut the deficit to a single bucket.

As time slowly ticked away, Otieno grabbed several key rebounds on both sides of the court and a huge Luis Kortright free throw froze the game for the Bobcats, who start their season 1-0 for the first time since 2020.

Quinnipiac will now travel to Easton, Mass., to face the Stonehill Skyhawks Thursday at 7 p.m.