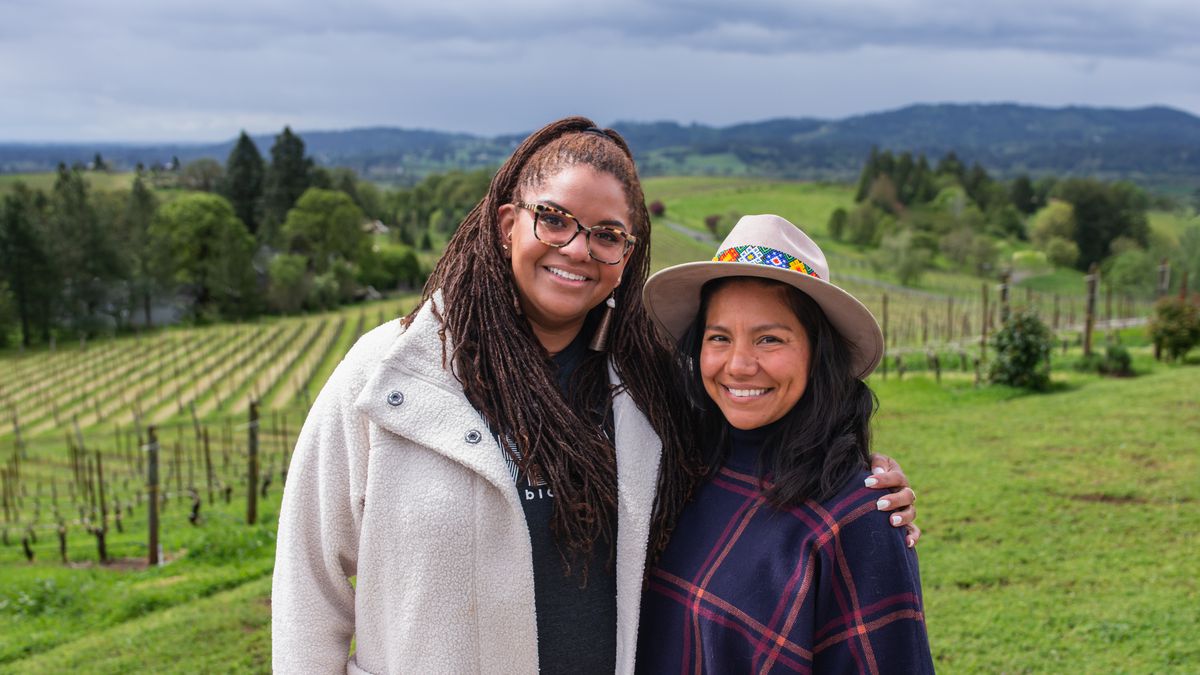 When someone mentions the Willamette Valley, wine often comes to mind. The region is home to more than 700 wineries, with some of the region’s vineyards planted by farmers even before Oregon became a state.

But the Willamette Valley wine region is also very white. And it’s not just here. According to the Association of African American Vintners, less than 1% of all winemakers in the United States are black.

But there is a sea change taking place.

Bertony Faustin became the state’s first black winemaker in 2008 when he opened Abbey Creek Vineyard, and since then three other black-owned wineries have opened. But it’s not just winemakers who are pushing for change.

As president of Compris Vineyard, Tiquette Bramlett is the first black woman appointed to oversee a winery in a major U.S. wine region. This year, she will help usher in a new generation of changemakers in the BIPOC wine industry with her non-profit organization, Our Legacy Harvested, and her inaugural internship program.

Crystal Ligori: Can we start by talking about the impetus of Our Legacy Harvested? I understand you founded it in 2020, around the time racial justice protests were unfolding across the country.

Bramlett Label: So the context of his starting is based on my family. My grandfather was the first black general contractor in the state of California, and a big thing for our family has always been rooted in community. When he started this business he was struggling to hire and no one was really connecting him and helping him build a community. So when it came to [him] was hiring, he was hiring people who were looking for jobs that got out of jail, or who for some reason just couldn’t be hired. And so he said, “This is my opportunity to build our own table and build this community,” and these people are our family as an extension. My [grandparents] were so committed to building this community and providing an education, and so [their community was] eager for certain knowledge, they would find a way to raise funds to give them the necessary education. He always said it was our reaped heritage. And it’s always something that stuck with me.

In 2020, I had heard things in our wine community and people saying, “I don’t necessarily feel safe here. I don’t necessarily feel like there’s room for me. I don’t feel like I have a community. It bothered me because part of me felt like I hadn’t done my job of what my family was good at. I am proud to be a connector and to be able to build this community. If I can, I facilitate this space for people. Diana Riggs at Mac Market and I were sitting in front of a bottle of Elena Rodriguez’s Alumbra rosé and that’s where it all happened. We wanted to bring levity, and people were asking us how to support BIPOC businesses. This is where our block party was born. That’s when I started having the big dream of saying, “Why don’t we have our education platform? Why can’t I have my campus? Why can’t I have this? I can and I want to and I will!

Ligori: And you selected the first interns for Our Legacy Harvested’s BIPOC Internship program. Marcela Alcantar-Marshall is one of them. Can you tell me what caught your attention in this course?

Alcantar-Marshall: Having a background in civil engineering, I have always been into the earth and how things are made. So when I moved from Beaverton to Carlton, I was interested in the agricultural side of the country, and I hadn’t realized there was so much wine here. So when I started following people on social media, one of the companies I followed was Alumbra Cellars – a Latino-owned company – and they had posted the internship. I was like, “This is awesome. This is what I’m looking for. I wanted to be in agriculture and also be able to get involved in this kind of community development process.

Ligori: What will the course be like, what will people learn?

Bramlett: We do specific programming for each individual, so they’re going to have group programming and they’re going to have individual programming. Part of their interview process was specifically to ask them what their desire was and what their ultimate goal was to get out of it. That was the exciting part for us because we want it to be mutually beneficial; we want them to get their ultimate experience, but we also want them to grow personally, because it’s also about wellness.

We essentially go through who, what, when, where and why? So why people fell in love with this industry. They’re going to get really hands-on farming experience and learn from vineyard stewards, but also vineyard managers. [They’ll] see the large experiment and the smallest scope to see what this whole experiment looks like. We really want to change the game of how that’s done… so they can see all the different sides of the industry, where they can fit in here. There is no limit to what they can do in the wine industry.

Ligori: I would like to talk a bit about Tiquette, you are a black leader in the wine industry in Oregon and Marcy you are the next generation of BIPOC people who are going to bring about change in an industry that seems very white.

Alcantar-Marshall: Growing up in Oregon, I’m kind of used to the fact that there aren’t many brown natives. To be there, you start giving the next generation a sense of, “Well, if they were there, then I can do it too.” So that’s kind of what I’m hoping for with that, it’s just to be able to be seen and [have someone realize]”I look like them and I can be part of this community.”

Working in construction, you don’t see a lot of women and my daughter, every time they ask on career day, what do you want to be? [She says], “I want to be a construction worker”, because she sees that it’s normal. And I want the same experience with wine because I didn’t understand wine culture. It was very intimidating. And I think being native and brunette, it becomes even more distant. So, hoping that if we are there, our mere presence will invite people to want to be a part of it.

Bramlett: I like to say that we are in the growing pains of the wine industry. I hate that it sounds so simple and use the phrase Nike, but it’s like “Just Do It”. You know, hire people. You will make mistakes, everyone makes mistakes, no one is perfect. But at the end of the day, you’ll start to make those changes and see the diversity in your space. I realized that Oregon has a complicated history, but we are in a time where we have the opportunity to change that.