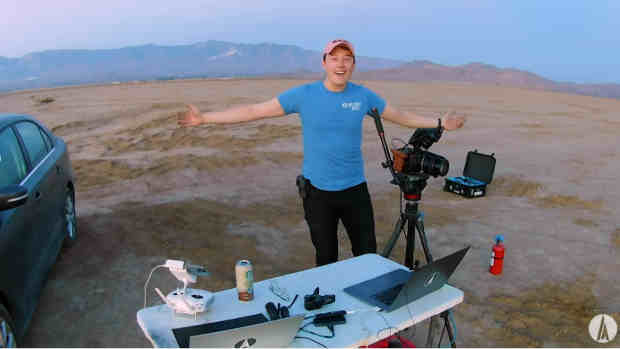 And it only took him seven years…

In the video, Barnard tells the story of a dream that began in the fall of 2015. It was a heartfelt project with a simple goal: to try and replicate the vertical takeoff, vertical landing made famous by the first stage reusable “Falcon 9” from SpaceX. rockets.

“And me did learn a lot.” He points viewers to years of videos, urging them to “see for yourself how I started to fail, fail, and fail, then burn out, fail more, and burn out again.

“But slowly, over time, you can see the reliability of these flights increasing little by little – tick by tick….”

Scout F Flight 4 takes off! I promise you we are not aiming for the drone… pic.twitter.com/tccBQRHXLz

The man behind the mission

What’s particularly inspiring is Barnard’s lack of technical training. Barnard jokes in an online biography, “I have an audio engineering degree from Berklee College of Music if that matters!”

“I picked up a few manuals, found some great YouTube tutorials for coding and mechanical design, and got to work experimenting!”

But Joe Barnard is a real, genuine fan of real-life SpaceX flights. “After seeing the ambition of SpaceX and the excitement of the new space industry, I was hooked,” Barnard’s biography recalls.

Falcon 9! I am so grateful to be able to live in a place where I can see launches regularly from my house pic.twitter.com/n8ikjv7PTY

“I was a wedding videographer on the weekends,” he explained in the video, and “was spending extra money on rockets during the week.” But his explorations are now funded by sponsorships, a Patreon page, YouTube advertising revenue and sales of model rocket components through a small company he started, BPS.space. The company’s site emphasizes a broader mission of “providing hands-on experience with advanced rocket components is important for the next generation of scientists, engineers, and astronauts.”

Among BPS’s offerings are model rocket flight computers, which do everything from parachute control and emergency in-flight aborts to more sophisticated thrust vectoring and even recording flight data on a map. micro SD – including orientation, elevation, speed and acceleration – all configured with an iOS or Android smartphone app.

Most notably, the company is looking to emulate the vertical-landing rockets from commercial spacecraft maker SpaceX. Barnard’s site says he chose this goal “thinking that a display of similar ambition and achievement against decent odds would impress SpaceX and might get me a job.”)

And this summer, that long-awaited vertical landing finally happened.

Barnard’s triumphant video features a montage of various preparations – and past failed attempts.

“I thought the project would only take 3-4 months when I started,” Barnard said. on Twitterjoking that “not only did I learn how rockets work, I also learned how their schedules work”.

I started https://t.co/vCxsyQYHo2 almost 7 years ago in the fall of 2015 with the goal of propulsion landing a model rocket. I had no experience in aero, EE, coding etc so it took a lot of trial and error but today I finally landed 🚀🎉 pic.twitter.com/z3MZfqQWxc

One site following the ongoing adventure was the amateur site Hackaday, which notes that in the early years Barnard tried to land vertically simply by timing everything so carefully that the rocket stopped burning just as it hit the floor.

In 2020, they report, Barnard had noticed that “wobble” of the controller, side to side, also reduced thrust.

But ultimately, Barnard settled on a design that involves blocking the rocket’s exhaust with ceramic “throttle arms” that click into place when it’s time to descend. Ceramic is needed to withstand the high temperatures of the exhaust.) “They definitely erode over time”, Barnard posted on Twitter“but are stable enough for at least two or three uses.”

The ceramic cut up to 80% of the rocket’s thrust, Barnard says in a video. But there is an additional method at work according to the BPS Space page. “The engine can be triggered at the right time to slow the vehicle down for a soft landing.” So Barnard came up with a rocket equipped with two separate engines – one to handle the launch, while the other provides a smooth descent.

Barnard built an Arduino-based flight control device named AVA (coding in C++), carefully mounting it as low as possible in the rocket, to avoid destabilizing its center of mass. After building and testing five successive generations of rockets, Barnard was finally ready to test the Scout F series in May – a 1.2 kilogram rocket equipped with these two separate engines.

You can see its first flight on YouTube, including spectacular footage from the dash cam and shots of the landing from multiple angles. At the time, Barnard called it “closer than it’s ever been”.

Barnard’s humble landing pad consisted of a tarp piled high with cardboard, carpet and a layer of mylar film – all designed to absorb some of the momentum, preventing what Barnard calls the “pervasive” rocket problem. bouncing on their landing pad. The mylar would hopefully allow the rocket to drag stopping on a nice smooth surface (rather than hitting a bump and then tipping over).

The aluminum landing legs are held in place with a rubber band which is cut during flight by heated nichrome wire – and more rubber bands hold them in place.

The first test resulted in a rocket on its side, but soon it was back on the launch pad – literally – as Barnard described his Scout F rockets as “built like a tank” and easy to launch. And fans on YouTube posted supportive comments. “Sometimes the shaking just means it’s happy to finally fly,” joked aerospace engineer Nicholas Rehm.

And another commenter couldn’t resist a little teasing. “You see the problem here is when he stopped moving he was on his side, you want him to stop with the pointy end up.”

It was a historic fifth flight when Barnard finally completed the long-awaited vertical landing. And Barnard made sure his video gratefully thanked all of the longtime supporters watching — and his backers on Patreon. “It’s crazy that I can do this, and it’s kind of a job.” Barnard said, adding “this thing is a money pit”. And then he revealed to all his followers that “you flew on this flight”.

Each Patreon supporter’s name appeared on a print rolled up and carried inside the rocket, “So if you’re supporting, you were a part of it.”

So what’s the next step? Barnard announced plans for even more flights of his Scout F rocket, “to see if we can make this landing a little less sporty.” But he also hopes to launch a 9-foot-tall model of SpaceX’s superheavy spacecraft, which in the real world can carry more than 100 tons of cargo into space. There’s also a top-secret project that Barnard obliquely calls “the Meat Rocket.”

I learned so much from my past mistakes. That’s why I decided to keep making mistakes in order to learn as much as possible 🙏 pic.twitter.com/fAvKK7KI2k

And Barnard also hopes to make progress on a model rocket that can soar more than 62 miles (or 100 kilometers), crossing what is commonly understood to be the boundary where outer space begins. “I’ve been quietly working on this project in the background,” Barnard says, describing it as “a year or two away — and within a few dollar signs.” But we are getting there. Barnard also describes it as akin to landing a model rocket, in that it’s “a really fun goal.”

BPS can provide a service that no other aerospace company can: reliably build rockets that land every time, 40% of the time. Scout Flight 6! pic.twitter.com/RBHrJOVISc

And he still hasn’t given up on the joy of his original dream. On Saturday morning, Barnard’s Patreon backers were able to watch his live footage of another vertical landing attempt by a Scout F rocket.