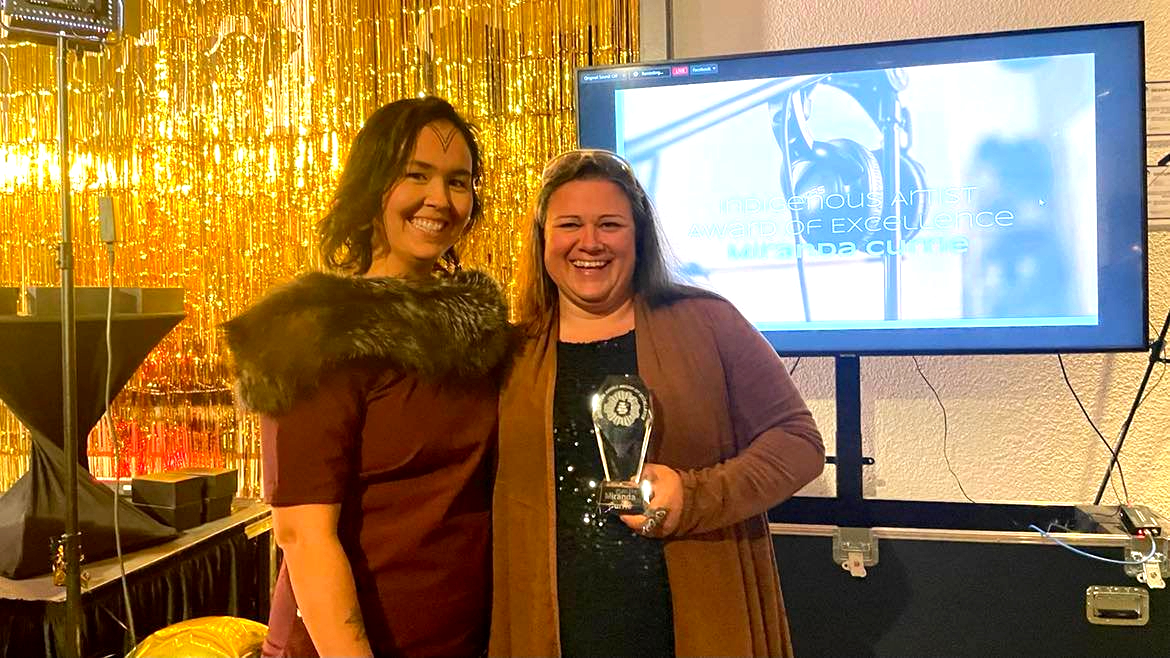 Miranda Currie, Crook the Kid and Kilo November were among the winners as Music NWT held its inaugural awards ceremony in Yellowknife on Saturday.

Drummer Cody Drygeese said the award is a testament to the health of Dene drumming.

“I am very happy to say that today many people from our First Nation are still participating in this ancient cultural practice,” he said.

“He didn’t make music for the money or the fame. He mostly played for free,” she said. “And he missed his shot at fame when he went to the Juno Awards because they really wanted to enroll this wonderful young talent, but he would have to move to Toronto. And who the hell wants to leave the North to move to Toronto?

Yellowknife Mayor Rebecca Alty, introducing Norm Glowach as the evening’s final inductee, noted that he had spent decades focusing his immense skills, from musical ability to audio engineering, on the Northwest Territories. .

“I’m lucky,” Glowach said. “I can record people. I work with my bandmates, who I’ve played with in Priscilla’s Revenge for 15 years. It’s a pretty nice life, I would recommend it to anyone.

“Every time I hear Miranda perform, her music spins in my head for the next six hours,” said the host of the ceremony, Inuk author and throat singer Tanya Snow.

“We played a lot of shows this week and the kids are singing the songs and lyrics, even for the new album. It’s the thing that always touches me the most, when you see parents and children singing with stuff.

“You’re like, yay, because I’m writing this music with a message to change this Indigenous narrative in Canada, starting with young people and their families.”

Gnarwhal’s Deep Spaced was crowned Best New Single of the past year. The Best New Album award went to Al Bee’s One From The Other.

Kilo November, the teenage DJ who sensationally closed the Cabin stage at Folk on the Rocks 2019 and returned in 2021, was honored for the territory’s best live performance.

“I am still in shock. I don’t believe it at all,” the 14-year-old said, adding that he found out he had been nominated after his mother got the call while he was playing video games.

“She came into my room and said, ‘Something crazy happened.’ I’m like, ‘What?’ And she’s like, ‘You got nominated for that music award thing.’ And I’m like, ‘Oh no, that’s great.’

“I decided not to hope because I didn’t really think I would win.”

Fort Good Hope rapper Crook the Kid, who performed that night, won the Outstanding Songwriting Award. “I can’t believe anyone in this room thought it was OK to give me an award,” he told the audience with a laugh after his set.

David Dowe’s Double D Studios won the Music Industry Award of 2022, while the Great Northern Arts Festival in Inuvik won an award recognizing its work as a venue. Inuvik resident Abe Drennan received the award on behalf of the event before winning the Fans’ Choice award of the evening.

Saturday’s ceremony, Music NWT’s first ever awards night, was held in a gold-adorned banquet hall with two stages and a live online stream.

The event was orchestrated by Music NWT President Trevor Sinclair in the hope that a dedicated and, by Yellowknife standards, lavish annual awards night will help raise the profile of the territory’s industry. .

The winners, in the order they were announced:

Check out the full list of nominees in our previous coverage.