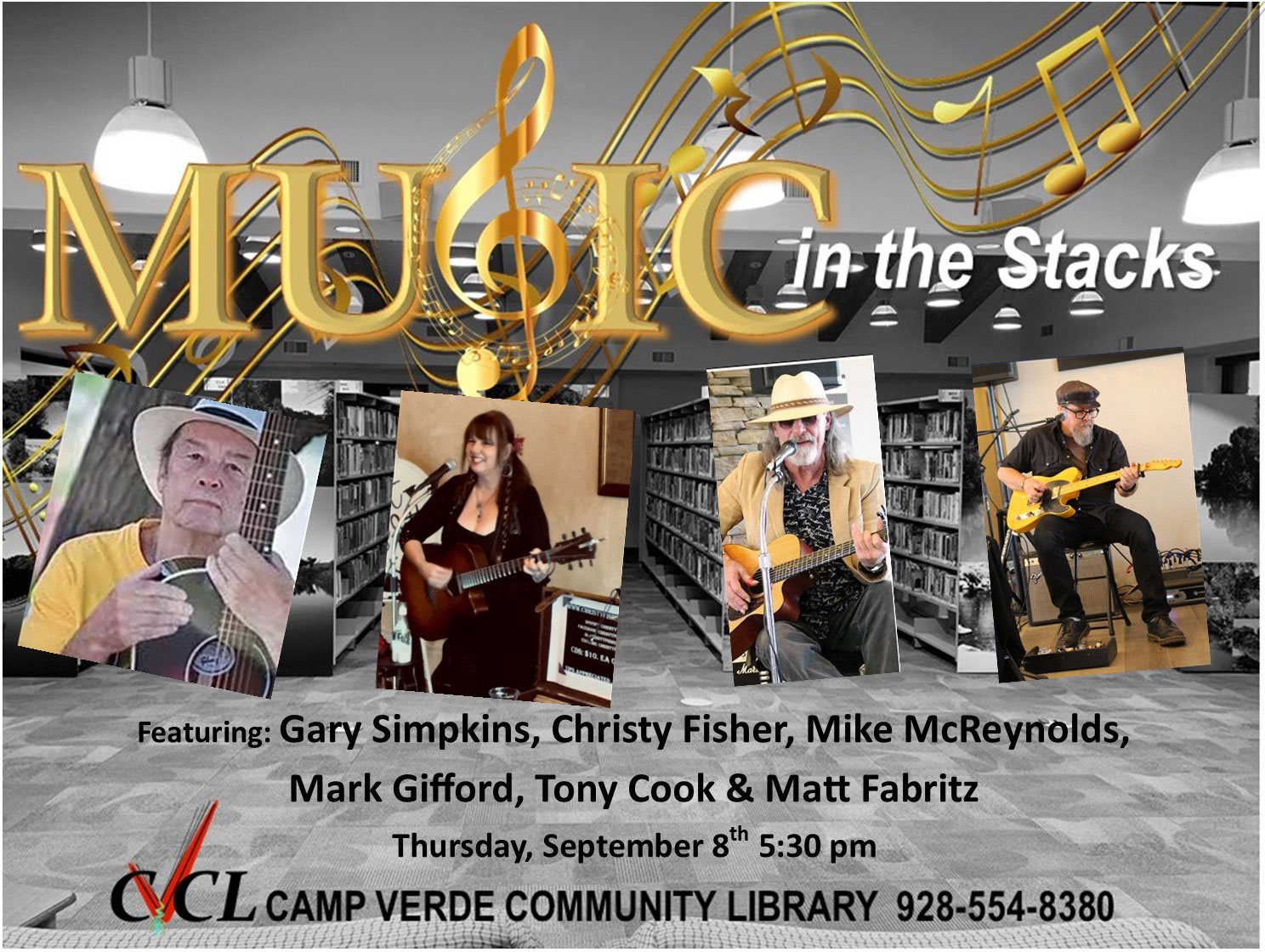 Music in the Stacks at the Camp Verde Community Library

Verde Valley News – Music in the Stacks returns Thursday, September 8 at 5:30 p.m. in the Fireside Room at the Camp Verde Community Library. Music in the Stacks is a showcase of local and national musicians who perform regularly in Northern Arizona. There are 3-5 different artists during the show, with a rotating variety each month.

The September concert features some of the fan favorites who have been playing since the early days of the library’s Music in the Stacks program. These incredible musicians include Gary Simpkins, Christy Fisher, Mike McReynolds, Tony Cook, Mark Gifford and Matt Fabritz.

Gary Simpkins has been a part of the folk/rock scene, singer-songwriter since the 60s, cutting his teeth on the Open Mic scene when he was a student in New Haven. He has performed concerts throughout the Northeast, including The Bitter End in New York, Club 47 (Now Club Passim’s) in Cambridge, Exit in New Haven and The Salt in Newport (where he opened for Maria Muldaur). Gary moved to Arizona in the 80s and for the past 25 years has performed at folk festivals and shows throughout the region in and around the Verde Valley. He’s also been running open mics almost continuously since the ’60s and is dedicated to giving new musicians the same mentorship he had when he started in New Haven.

Jerome-based singer, songwriter and multi-instrumentalist Christy Fisher was recently nominated in four categories by the 2021 International Singer and Songwriters Association, and ended up taking home silver for Female Album of the Year for his album Mixed Signals on August 6.e in Atlanta, Georgia. Christy has performed with a few local musical groups throughout her 30 years in the area, including Mountain Stranded Time, Cattywampus, Christy and Frenz, The Jerome Philharmonic Convergence and the Jerome Ukulele Orchestra. Fisher’s performances are a combination of award-winning songwriting, unusual audio engineering techniques and powerful vocals.

Born into a musical family, Mike McReynolds has been playing guitar since fifth grade and has since played professionally as a single, duo, trio and full band. He is a singer-songwriter who enjoys writing in all genres of music, from blues to folk to rock. Over the years he has developed his own unique style and has performed at many major national and international singer-songwriter festivals.

Gary, Christy and Mike are joined by Tony Cook, Mark Gifford and Matt Fabritz. Tony, who is known in the highest echelons of country music in Arizona, brings a vast catalog of styles, techniques and influences to everyone he plays with. Mark is known to many for his incredible skills in setting up sound for Music in the Stacks programs, but also showcases his talents playing in the local band Salt Miners which performs throughout the Verde Valley. Based in Flagstaff, Matt is an accomplished percussionist, complete cajon drum kits for many rock and country bands in northern Arizona. Matt is also active in the community playing in bands and at his church.

About the Camp Verde Community Library

At the Camp Verde Community Library, we connect people of all ages and backgrounds to the expanding world of information, ideas, and creative experiences through free and equitable access to library resources. The Physical Library is located just off Montezuma Castle Highway at 130 Black Bridge Road, Camp Verde AZ. Find the online library at www.campverde.az.gov/cvcl. For more information on this or any other library program, call us at 554-8380.