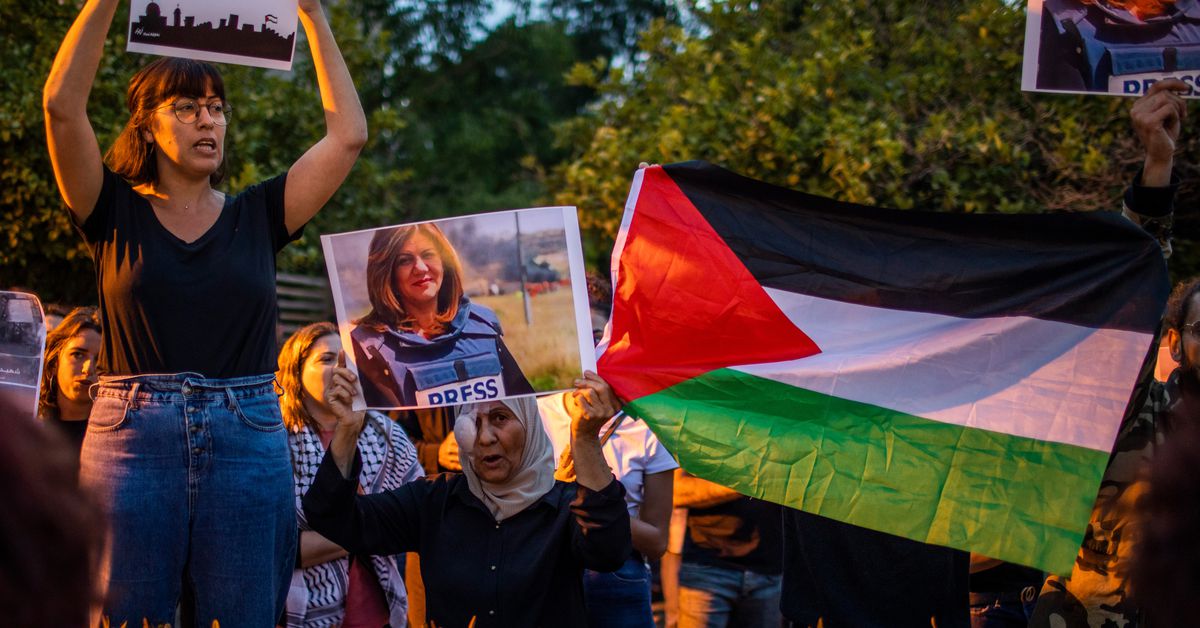 For more than two decades, journalist Shireen Abu Akleh has covered human rights abuses in the Occupied Palestinian Territory. A generation grew up watching broadcaster Al Jazeera break down some of the hardest news to cover.

On Wednesday morning local time, she was shot and killed while doing the same, reporting on a raid on the West Bank city of Jenin by the Israel Defense Forces (IDF).

In a statement, Al Jazeera, the Qatar-based Arab news network, accused Israeli forces of killing her, calling it a “blatant murder” and a “heinous crime, which aims only to prevent the media from doing their duty”. . The Palestinian Health Ministry also blamed the Israeli army.

Israel attributed Abu Akleh’s death to Palestinian gunmen, saying she was caught in the crossfire. Several witnesses, however, said it is more likely that she was shot by IDF forces than by a Palestinian. If confirmed, Abu Akleh’s murder will be part of a larger pattern of attacks on the press in Palestine and systemic violence against Palestinians more broadly.

The language an Israeli spokesman used Wednesday to describe the work of Palestinian journalists underscored this reality. Israeli military spokesman Ran Kochav mentioned“They are armed with cameras, if you will allow me to say so” and in doing so draws an unsubtle comparison between the work of journalism and the work of violence.

If an investigation does find Israeli soldiers responsible, it wouldn’t be the first time the country has targeted the press. Israel has killed more than 50 Palestinian journalists since 2001, according to the Palestinian Journalism Syndicate, and more than 144 have been injured in the past four years alone. “As for the event itself, unfortunately, it is not unique, not different,” said Saleh Hijazi, deputy director of the Middle East program at Amnesty International. “It fits a pattern, a pattern of unlawful killings, as well as a pattern of targeting journalists and human rights defenders.”

What we know about the death of Abu Akleh

Abu Akleh had become a prominent media voice when she reported on the 2001 uprising, or Intifada, which marked the past two decades of violent inertia between Israel and Palestine. She had continued to document the Israeli occupation and the daily life of people living in Palestine, and was one of the best-known faces of Palestinian journalism.

“She was the voice of Palestine to the rest of the Arab world and its diaspora,” said Mezna Qato, a historian at the University of Cambridge. “It was she who forced the Arab world to remember, confront and take seriously what it means to disengage from the question of Palestine.”

On Wednesday, she was reporting from Jenin, where the IDF had been driving, as he says, “Counter-terrorism activity to apprehend suspected terrorists.” Israeli forces carried out more raids in Jenin after several recent deadly attacks inside Israel, which Israel has attributed to militants in the city.

Abu Akleh and about four other journalists arrived in Jenin early Wednesday morning. clashes between the IDF and Palestinian gunmen were reported in the city. Gathered several hundred meters from the Israeli forces, the journalists watched from afar an Israeli raid on a Palestinian house. To the crackle of gunfire, the group took shelterbut Abu Akleh already appeared to have been shot. According to the Washington Postshe was taken to the hospital, where she died.

Ali Samoudi, his producer, who was also shot and is currently in hospital, said Israeli forces shot her. Two Palestinian witnesses also attributed the killing to Israeli forces, told The Times of Israel that the buildings around the area were filled with soldiers.

A fragment of the bullet was removed from his head during the autopsy; the director of the Palestinian forensic institute said he was not yet able to identify who shot him.

Samudi mentioned that there were no armed Palestinian fighters nearby and that Abu Akleh was killed “in cold blood”.

An entire nation in mourning. Renowned Palestinian journalist @ShireenNasri, an icon for all of us who grew up watching it every day on television, has just been shot dead by Israeli forces. I still can’t believe the news. pic.twitter.com/EGeljWkXwo

Israeli army chief Lt. Gen. Aviv Kochavi told the PA, “At this stage, we cannot determine what fire injured her and we regret her death.” However, previous government statements blamed the Palestinians more directly. The Israeli army’s Twitter feed mentioned it was “investigating the event and examining the possibility that journalists were hit by the Palestinian gunmen”. This explanation was echoed by Israeli Prime Minister Naftali Bennett, who said that “armed Palestinians fired inaccurately, indiscriminately and uncontrollably” during the IDF operation.

“Our IDF forces responded as precisely, cautiously and responsibly as possible. Sadly, Al Jazeera reporter Shireen Abu Akleh was killed in the exchange,” Bennett said. The Israeli Foreign Ministry shared a video of Palestinian gunmen active in the city on Wednesday to back up these claims.

But a researcher from the prominent Israeli human rights organization B’tselem analysis the footage and reported that the shooter in the video was entirely at a separate location in Jenin.

Israeli leaders, including the prime minister and secretary of defense, usually don’t speak out on such things; that they issued such statements about Abu Akleh shows the weight of this murder.

The past two months have seen a significant increase in violence in Israel and Palestine, with the most deaths in this period since 2008, according to Amnesty International. Amnesty has recorded 34 Palestinians killed, including six children, in March and April, and 18 people have been killed in Israeli towns in attacks in recent weeks.

“That’s just what’s happening, because there’s no addressing the root causes, which is apartheid, because Israel can take advantage of that impunity, mainly because of the role that the United States and other Western allies,” Hijazi said.

Why Israel Can’t Investigate Itself

United States Ambassador to Israel Thomas Nides mentioned that he encouraged “a thorough investigation into the circumstances of [Abu Akleh’s] the death and injury of at least one other journalist today in Jenin. State Department spokesman Ned Price mentioned“those responsible must be held accountable.”

It probably has something to do with the Israeli government not having a good track record of investigating its own crimes. Israel does not allow international investigations into violations in the occupied country or territories, and in recent years has chosen not to cooperate with or provide access to United Nations commissions or special rapporteurs. Israel even named the first Palestinian rights organization, Al-Haq, as terrorist organizationin what experts said was retaliation for Al-Haq’s documentation of violations on the ground.

“No one should believe Israeli promises to investigate without citing what happened because the promise of investigations is nothing but the first step in the organized whitewashing of Israel,” Hagai El said. -Ad, executive director of rights group B’tselem. “Israel cannot and does not want to carry out such investigations, which opens the door to international legal responsibility.

B’tselem stopped cooperating with the Israeli government on the investigations. Israel tends to prolong investigations as long as possible and ultimately does not hold military leaders to account, according to El-Ad. “Israel treats every incident as an extraordinarily exceptional event, and investigations always push responsibility down to the lowest level of soldiers,” he told me. “It shouldn’t surprise anyone – it’s the military investigating the military.”

Israel has maintained that it is engaged in investigations, including one dedicated to the death of Abu Akleh.

“To uncover the truth, there must be a real investigation, and the Palestinians are currently preventing that,” Prime Minister Bennett said in a statement. statesment. “Without a serious investigation, we will not reach the truth.”

For Omar Shakir of Human Rights Watch, the situation reflects a broader structural dynamic. “Their calls for investigations are like a few bad apples in an otherwise normal situation, but that’s not the reality. The Palestinians live in a situation of serious underlying structural violence,” he told me. “This underlying daily reality of apartheid and the cold violence of structural repression leads to the searing violence of bloodshed and the murder of Palestinians.”

Abu Akleh has already earned tributes from US Ambassador to the United Nations Linda Thomas-Greenfield, who had met Abu Akleh recently and said he had “extraordinary respect for her”.

It was also important that Abu Akleh was a woman who delivered the news to Arabic-speaking audiences around the world. “So many girls wanted to be her. So many aspiring journalists have told me that they would stand in front of a mirror and use a hairbrush and pretend it was a microphone, and basically pretend to be Shireen,” said Dalia Hatuqa, journalist and friend of Abu Akleh.

“Now she’s been silenced in this totally violent way that echoes some of her own reporting,” Qato told me.