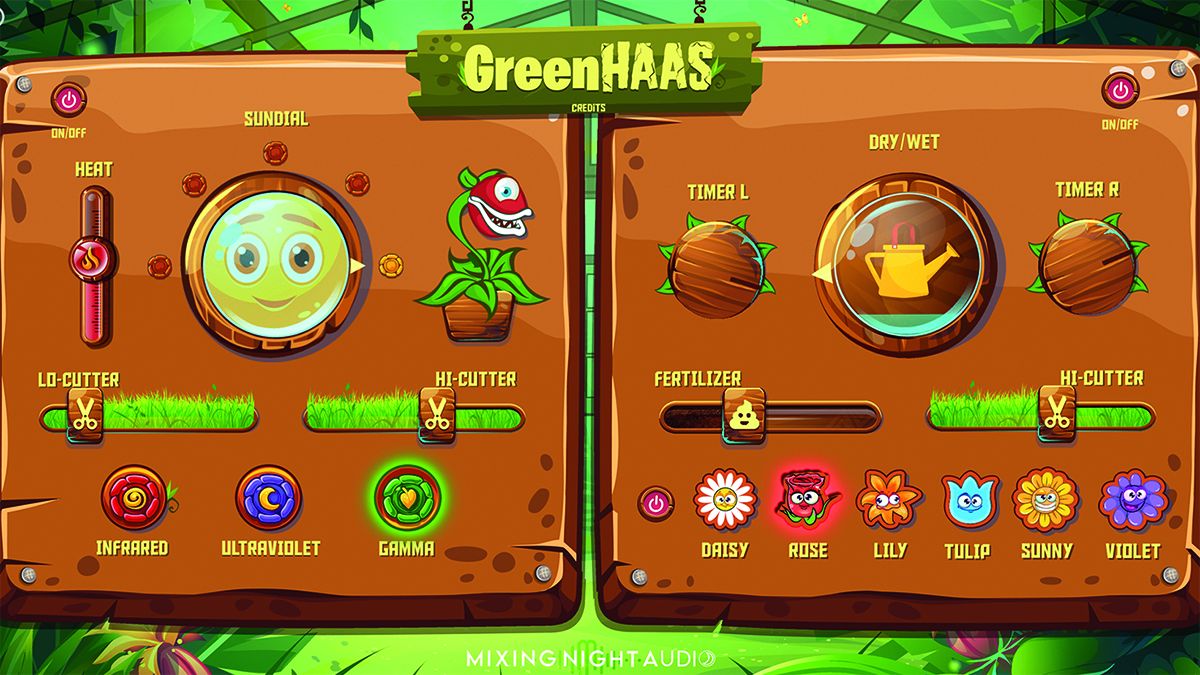 Night Audio Mixing GreenHAAS: What is it?

Ken Lewis is a Grammy-nominated producer and mixer who has also developed numerous educational resources through his Audio School Online and, more recently, his Mixing Night live broadcasts. GreenHAAS is a new plugin available through the Mixing Night Audio website that takes a number of Ken’s favorite processes and bundles them into a fun, easy-to-use processor. However, it’s fair to say that GreenHAAS isn’t your typical artist-approved plugin. Indeed, Ken’s name cannot be found. So what does the plugin actually do?

GreenHAAS is a stereo saturation and enhancement plugin. The interface is divided into three sections with saturation on the left and Haas delay and modulation on the right. Each section has an individual bypass and there is also a global bypass. There are three types of saturation coupled with high cut and low cut EQs, an input level and a drive type.

Ken has selected three very distinctive and sonically pleasing saturations that include reasonably subtle (infrared), heavy harmonics (gamma), and somewhere in between (ultraviolet). The labeling is also appropriately gamified, without reading out parameters, so that having the input level set using the Heat slider and the type of control via the sundial button seems appropriate.

Whatever your thoughts on the interface, once you’ve kicked off a few sounds you’ll quickly realize that the plugin really is a steal. So whether you want to add presence to an 808, a bit of an edge to a DI bass or electric guitar, or just liven up any dull sounding instrument, there are plenty of options. This is because the more we dig into it, the more we begin to appreciate the subtle differences between each of the saturation settings.

The Haas effect or precedence effect is a psychoacoustic phenomenon linked to the fact that human hearing cannot perceive very short delays between sounds (up to about 40 ms). So if two sounds are played in rapid succession, they sound as one sound. In addition, the perceived location of the sound is dominated by the sound that first reaches our ears. By dividing a mono sound into two identical panning components and adjusting the delay time on one side, we can actually change the perceived position of the sound in the stereo field or just make the sound appear wider.

This is a classic engineering trick that is exploited in GreenHAAS to provide various types of width enhancement. Not surprisingly, the way the effect sounds is very sensitive to the delay times used, and with GreenHAAS some of the settings are longer and produce audible slapback effects. Even so, each left / right timer setting combination produces its own groovy results.

The Haas delay section has a timing control for each channel, a wet / dry mix, high cut EQ, and delay return (fertilizer). During this time, there is a choice of six types of delay modulation. The sync settings are all different, so even if you select the same button position for left and right, you’ll still get magnification.

• Haas Kilocores
If you’re looking for a simple Haas effect plugin, this one is great value for money.

With the most extreme settings, you’ll also get some pretty obvious slap-back delay, and it’s pretty clear that the delay delays are beyond the limits of the Haas effect. Even so, to control the overall width of the effect, you just use the wet / dry mix. Of course, once you start collecting feedback, things take on a whole new character. Add one of the modulations and you can create all kinds of flanger and chorus effects. In fact, it’s pretty easy for things to get quite busy.

Ultimately, GreenHAAS is a mood plugin where you try out the available knobs and knobs and most importantly use your ears to find a sound that suits you. That said, GreenHAAS has over 50 presets, many of which were created by Ken himself. So whether you’re using the Try On Bass Guitar preset to add subtle spice to a simple DI bass, or using Tape Cassette In The Sun for extreme vintage character, the presets offer a great preview of what it can do. .

Needless to say, we love this plugin. It’s fun, creative, and offers a great diversion both visually and sonically from the more staid plugins that dominate most workflows.

MusicRadar Verdict: GreenHAAS uses an unconventional interface to produce classic effects and is easy and fun to use. Recommended.