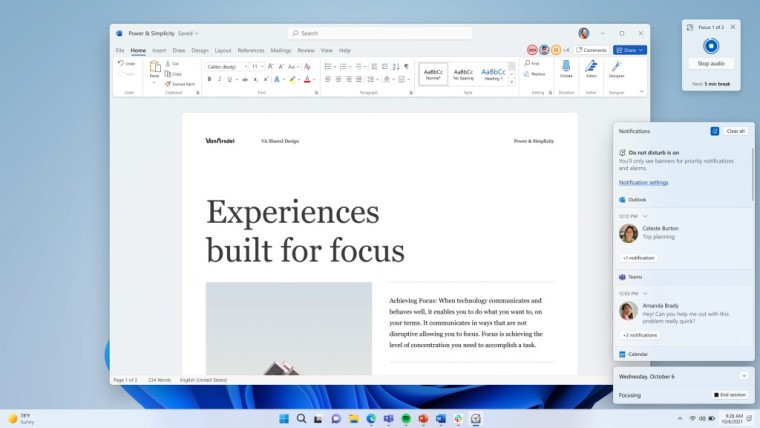 With the launch of Windows 11, Microsoft moved to an annual platform feature update cycle. This means that the upcoming Windows 11 22H2 will be the only major release this year. Microsoft is now detailing the four main features that will come with this update.

Speaking of shipping, reports suggest that Microsoft is reading to bring Windows 11 22H2 to RTM (manufacturing release) this month. I’m not sure how much general availability in May means H2 (half 2), but either way, it looks like the first full update for Windows 11 is coming.

Focus is a new experience that adds several features to the operating system. For example, the ability to enable Do Not Disturb right in the Action Center. This setting allows users to choose which notifications they want to display.

Next is the Focus session, which configures itself to give users more productivity on Windows 11. Specifically, it automatically triggers Do Not Disturb and disables taskbar notification badges. Sessions also have a timer to remind users to take a break. Microsoft has built an integration for Focus into Spotify and the Windows Clock app.

Elsewhere, Microsoft is adding live captions for audio content across Windows 11. This means the platform as a whole can transcribe captions from any audio. Microsoft points out that this capability works even offline.

Voice commands are proliferating to allow users to open apps, switch between them, browse the web, read emails and create emails. With the new voice access capabilities, Windows 11 will require you to upload a voice template for speech recognition. This new feature will initially be available in US English.

“Voice Access includes an interactive guide that explains how to perform common tasks using your voice. You can also access a full list of commands by asking “what can I say?” when voice access is listening. Voice Access even gives real-time feedback of what it heard so you know which word was misrecognized in the event of an error.

Tip of the day: Windows now has a package manager similar to Linux called “Winget”. In our tutorial, we show you how to install and use this new tool that allows quick installation of applications via PowerShell or a GUI.