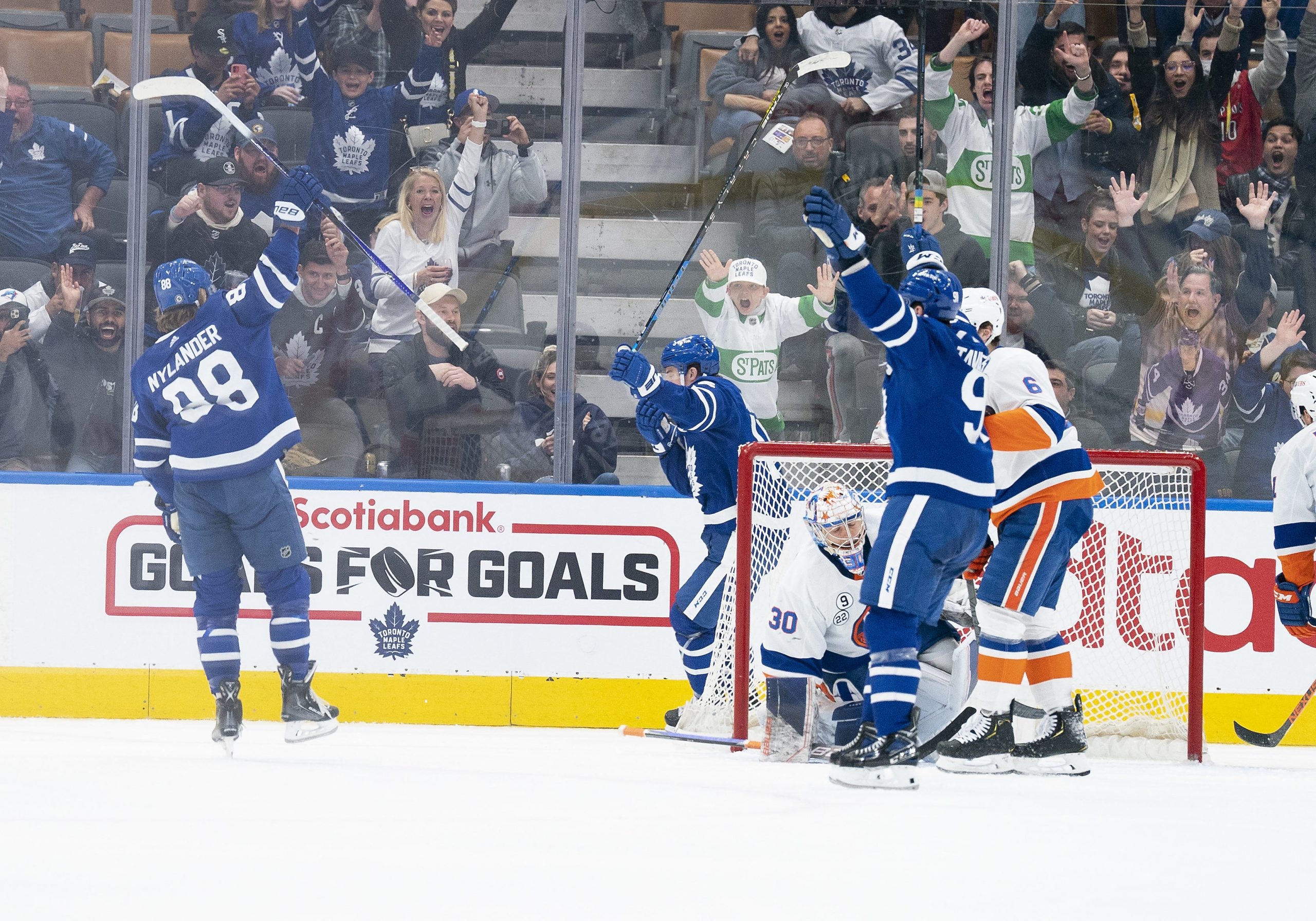 The Leafs didn’t need their best player on the roster Sunday night to set franchise records for most wins and most points in a season.

While Matthews was nursing an undisclosed minor injury, the Leafs beat the New York Islanders 4-2 at Scotiabank Arena in front of an Easter crowd of 17,463.

When Leafs coach Sheldon Keefe announced Matthews’ injury hours before the game, he had no fears that the situation would escalate.

“Auston has a minor injury I would say at this point,” Keefe said.

“It’s going to be day to day. Just really being on the safe side, we’re going to give it a day off and reassess it from there.

Matthews, who is sitting on 58 goals, had a maintenance day last Monday and did not practice. Keefe said Matthews’ injury happened in Ottawa against the Senators on Saturday.

“Considered fairly minor, but given the back-to-back, quick turnaround, we’re going to give it the night off,” Keefe said.

How did this Leafs team lead to the most regular season success in team history?

“There’s a lot to do in a long season,” said defenseman Morgan Rielly. “It’s just about trying to be consistent every day with our work ethic and our desire to improve and compete at a high level.

“We’ve done a good job of trying to keep our goals at the forefront of what we do every day. We are motivated to accomplish many things.

We asked Rielly if he played on a deeper Leafs team during his tenure in Toronto, and he had the right answer.

“It’s hard to think of one, but that being said, unless you win in the playoffs, it’s hard to look past that,” Rielly said. “The team is deep, yes, but you have to do something with it.”

Mitch Marner scored his 94th point — on his 34th goal of the season — to tie his career high.

And when William Nylander scored in the second period, it was his 31st, also matching his career high.

Jack Campbell made 27 saves for his 29th victory. David Kampf scored in an empty net with 8.1 seconds left.

The Leafs improved to 6-4-2 in the second straight sets game. They’ve won 10 of their last 12 games and solidified their spot in second place in the Atlantic Division, as they sit six points ahead of third-place Tampa Bay.

After the Islanders took a 2-1 lead on a bizarre goal 31 seconds into the second period – Alex Kerfoot accidentally passed the puck past Campbell and the goal was credited to Josh Bailey – the Leafs scored the next two for take a 3-2 lead.

Kerfoot atoned for his blunder by making a smart pass to Pierre Engvall to tie the Leafs at 10:49. Kerfoot braked on a 2-on-1, allowing Pierre Engvall to get the half step he needed to slam the puck past Isles goaltender Ilya Sorokin.

Nylander scored on the power play at 1:20, beating Sorokin between the legs after receiving a pass from John Tavares.

We apologize, but this video failed to load.

Nylander and Engvall were on the wings with Kerfoot, while Kampf was between Michael Bunting and Colin Blackwell.

Nick Abruzzese and Wayne Simmonds joined the roster after sitting out in Ottawa and playing on the fourth line with Jason Spezza.

With Bunting serving a minor sentence, the Isles took a 1-0 lead at 2:17 of the first when Anthony Beauvillier went high to Campbell’s blocker side on a screen.

Marner scored on a Mark Giordano rebound at 17:31, the play coming from a clever cross pass from Bunting to Giordano.

Disabling video conferencing apps may not prevent them from listening

AI masters language. Should we trust what he says?