Ginger Alden with Elvis Presley on his last vacation in Hawaii 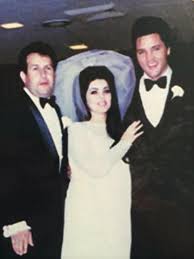 Joe Esposito, best man at the wedding of Elvis and Priscilla Presley

The magic of Elvis lights up movie screens; And King’s Spirit mysteriously transcends the interworld and electrifies the airwaves with John Krondes and Elvis Hit Team

LOS ANGELES, CA, USA, July 9, 2022 /EINPresswire.com/ — HOLLYWOOD NEWS…SHOCKING BUT TRUE! Elvis Presley and his long-lost Memphis Sound have magically reappeared and are fueling a fan frenzy that is spreading around the world. The year 2022, by a design of the higher powers, has become, unexplained to earthlings, the appointed time for the return of Elvis Presley and his larger-than-life music-making machine. As the old saying goes, “What will be, will be”. Don’t even try to question it or understand it. It was a force greater than nature itself that sent Elvis’ spirit back to planet Earth in the knees of long-awaited music lovers. Revere folks at The Moment, because THE MEMPHIS ROCK IS BACK. Baz Luhrman’s movie ELVIS drew record crowds last week, and surprisingly radio stations and fans around the world are also learning in shock mode of the return of the Elvis music-making machine. Presley. CDX Nashville, Sony Music and The Orchard released E-Blasts to radio stations and media around the world with THE END by John Krondes and the Jordanaires as well as a 90-minute special ELVIS ALIVE – An Instantly Shattering New Beginning the barriers of decades of silence.

THE END is not just a famous love song, but signifies a movement, of the new beginning for Elvis Presley’s life and the arrival of the next chapter of Memphis Sound. The incomparable Memphis Sound is intact and has come back strong; and now, by the call of fate, there is a new messenger, John Krondes. THE END a/k/a “At The End Of A Rainbow” was co-written by John Krondes’ father, Jimmy Krondes, and first became a worldwide hit in 1958 by Earl Grant. As fate wrote the record, Elvis Presley serenaded Priscilla Beaulieu with THE END the same night they met in Germany. Decades later, John Krondes sparked the interest of the Jordanaires who supported Elvis Presley from 1956 to 1970 and made a new recording of his father’s Mega Hit with them. Fast forward, John Krondes regularly attracted virtually every original Elvis Presley musician and singer, including Presley Road manager Joe Esposito. To date, he has amassed a valuable collection of nearly 100 new recordings. John Krondes’ music masters are uniquely Memphis Rock, scare people, and momentarily represent the very first new Presley Hit Team recordings since 1977. Included are the TCB Band, American Sound Studio Band, DJ Fontana, Ronnie Tutt, Jordanaires, Stamps, Imperials, Sweet Inspirations, Millie Kirkham, Elvis Horns, and more.

The Kayden Gordon Show will air an interview with John Krondes and play THE END which will be recorded on July 11, 2022. A link will be posted and shared at a later date. The Kayden Gordon Show – Today’s Best Country Mix is ​​syndicated to over 60 radio stations. Listeners can log in to listen to shows at www.thekaydengordonshow.com. Music fans can also tune in and listen live to Mountain Country, another great US station that broadcasts THE END. Listen live at https://live365.com/station/Mountain-Country-a28553. THE END by John Krondes and the Jordanaires is also airing and trending on Europe’s #1 country station, CMR Nashville. . THE END will also be performed on the Lee Williams Show on Fridays and Saturdays at noon and midnight – 2 hour show. CMR Nashville broadcasts from its UK studios to over 80 countries. Listen live at www.cmrnashville.com or on TuneIn. Ask for THE END by John Krondes and the Jordanaires at RMC Nashville and your favorite radio stations. * Tel: +44 (0)203 371 8163 or Email: [email protected]

THE END a/k/a “At the End of a Rainbow” – John Krondes and the Jordanaires *CDX Nashville Download Link:
https://mailchi.mp/cdxcd.com/new-single-john-krondes-with-the-jordanaires-the-end?e=e2c947c958
DOWNLOAD LINK for THE END

Elvis Presley’s 20-year-old best man, best friend, and road manager Joe Esposito took over the management and promotion of the John Krondes Project and Elvis Hit Making Team until his death in 2016. It was TCB Joe Esposito who had both the call, the direction, and the instinct to know precisely what was needed to breathe new life into Elvis Presley and Memphis Sound. Joe Esposito and his racehorse John Krondes were clearly together on a Rock ‘N Roll mission to save Memphis Sound and bring the world the next chapter. Joe Esposito and Presley’s fiancé Ginger Alden found the lifeless body of Elvis Presley in the bathroom of Graceland on August 16, 1977. They both knew that Elvis Presley did not want to leave this earth at 42 year. Joe and Ginger both talked about Elvis’ big plans for the future to make more good music. If there was a way for Elvis Presley to return to continue the music, it seems the King and his Memphis Sound have found their way back and into the hearts of nostalgic fans. It was Joe Esposito’s end-of-life wish to bring back the Memphis Rock for Elvis. Thanks to Esposito’s dedication, John Krondes now has nearly 100 new recordings featuring Elvis Presley’s original musical entourage to share with the world.


EIN Presswire’s priority is source transparency. We don’t allow opaque clients, and our editors try to be careful not to weed out false and misleading content. As a user, if you see something we missed, please bring it to our attention. Your help is welcome. EIN Presswire, Everyone’s Internet News Presswire™, attempts to define some of the boundaries that are reasonable in today’s world. Please see our editorial guidelines for more information.