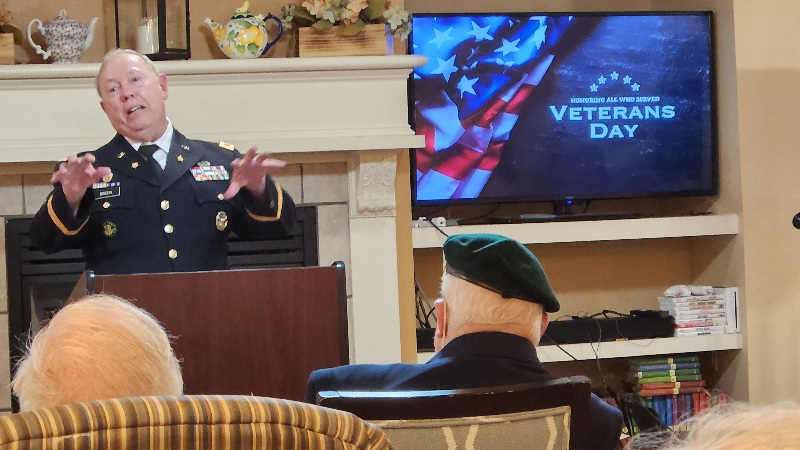 EAST GOSHEN – “Every day is Veterans Day,” according to Colonel Richard Breen, retired US Army veteran and currently employed at the Pentagon.

Breen spoke to around 60 residents, family members and staff at Watermark Retirement Community in Bellingham on Friday to mark Veterans Day.

“The only way we can educate our fellow Americans is to deliver this message,” said Breen, who was accompanied by his 92-year-old veteran father Dick, a resident of Bellingham. “People need to hear.

“We are the messengers for this to happen. Stand firm for what you have done.

Richard Breen and his father Dick are both US Army veterans. Dick was drafted in the 1950s and Richard retired as a colonel after 30 years of active service. He is a Department of Defense civilian and works on health-related issues.

Breen acknowledged the sacrifices of family members who also served.

“You are all true heroes,” he said. “Family is at the heart of what service means on Veterans Day.

“These families are making incredible sacrifices. Service is not just for us in uniform, service is a family affair.

Breen spoke of a speech given by General Douglas MacArthur at West Point. Three words resounded from this speech: duty; honor; and country.

“These three words dictate what should be, what can be, and what will be,” Breen said.

The retired colonel said serving the country is an adventure.

“This adventure is what all veterans share,” he said. “Commitment, adventure and sacrifice bring us together.”

Veterans Day was originally known as Armistice Day in recognition of World War I, or “the war to end all wars”. In 1954 the name was changed to Veterans Day to mark the 11th hour, 11th day, 11th month of 1918 and the end of World War I, and to recognize all veterans of all wars .

As the veterans saluted, the national anthem was sung. The flag was also saluted for the Pledge of Allegiance.

All five service songs were played. The Coast Guard, Air Force, Navy, Marines, and Army have all been recognized. The veterans stood as their anthem was played.

Finally sick of the sound of silence