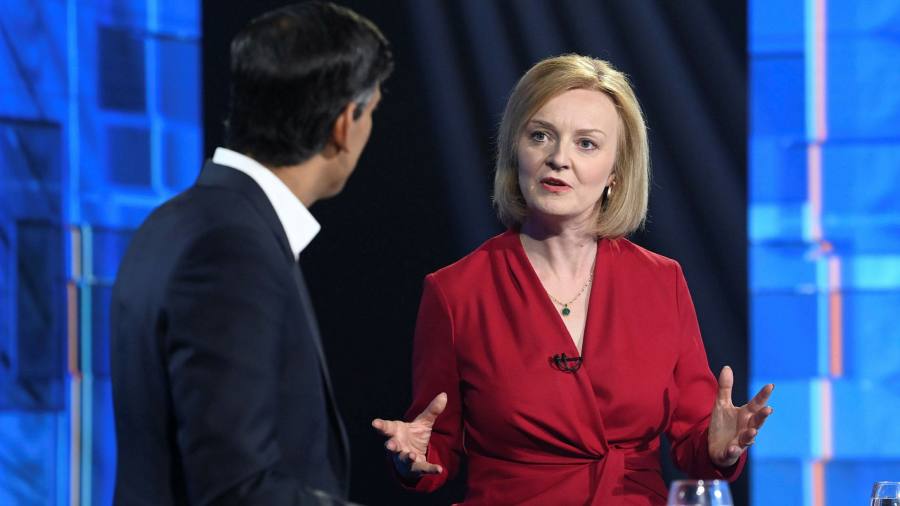 On Thursday, Foreign Secretary Liz Truss slammed her Tory leadership rival Rishi Sunak as ‘the contender for continuity economic policy’, saying he had steered Britain’s economy in the ‘wrong direction’ when he was chancellor.

In a sign of the gloveless nature of the final contest to become leader of the Conservative Party, Truss vowed to hold an emergency tax cut budget within days if she becomes prime minister, ignoring accusations of fiscal irresponsibility.

Currently, Truss is the bookmakers’ favorite after opinion polls gave her a strong lead over Sunak, who was forced to defend announced tax hikes when he was chancellor.

Truss’ plans to reverse National Insurance and corporation tax increases, while scrapping ‘environmental levies’ on energy bills, would cost more than £30billion a year, although which his team claims can be found in Treasury forecasts.

“The tax cut plans are affordable under our current fiscal rules, so we would still see the debt go down after four years,” she told BBC Radio 4. Today program.

When asked if she was concerned that her proposed tax cuts would increase inflation — which is the consensus among economists — Truss said the opposite was true.

She cited an article by pro-Brexit economist Patrick Minford in the Daily Express to suggest that her tax plans would lower inflation instead. “My tax cuts are not inflationary, the reason for that is that the national insurance cut, the corporate tax cut, increases the supply side of the economy,” she said. .

The Foreign Secretary said there was an unhealthy consensus within the Treasury, among economists, the Financial Times and other news outlets – ‘peddling a particular type of economic policy over the past 20 years’ – which had not succeeded.

“What I know of Treasury from having worked there is that they have an economic orthodoxy and are resistant to change,” she said. “And what people in Britain desperately need now is change.”

Truss said now was not the time to “business as usual” in Downing Street. “We need someone with the tenacity, the courage, who is ready to take on the Whitehall machine and lead change.”

Meanwhile, Sunak told the Daily Telegraph on Thursday that he too believes in “cutting taxes and bureaucracy”, but only once the government establishes a base of low inflation and sound public finances.

In an attack on Sunak’s record, writing in the Daily Mail, Truss said the government was “going in the wrong direction on taxation, with the tax burden at its highest level in 70 years”.

Although Truss, who served in the cabinet under David Cameron, Theresa May and Boris Johnson, campaigned for the UK to remain in the EU in 2016, she went to the final ballot after winning votes many right-wing Eurosceptic Conservative MPs. .

On Thursday, she said she got the wrong call when she opposed Brexit. “I was wrong and I’m willing to admit I was wrong. Some of the omens of doom didn’t come to pass, and instead we actually opened up new opportunities.

Truss pointed to her file at the office saying she was tough under pressure. “In the jobs I’ve had, I’ve had to deal with some of the worst flooding in a generation, some of the worst prison riots since Strangeways, the worst war in Europe.”