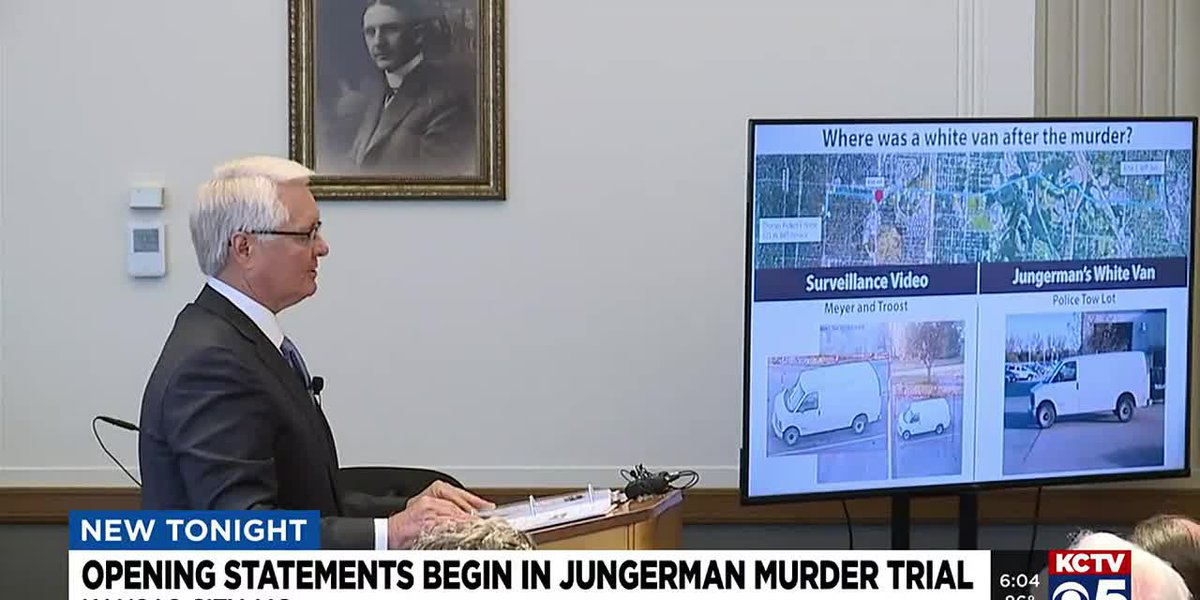 Jungerman is accused of killing 39-year-old attorney Tom Pickert in October 2017 outside Pickert’s Brookside home. Pickert’s relatives and friends waited nearly five years to see his alleged killer face the charges against him. Jungerman is charged with first degree murder and criminal action with a weapon.

On Tuesday, jurors saw crime scene photos. They heard the 911 call from Pickert’s wife. Prosecutors showed the jury video surveillance from multiple city traffic cameras and a city bus from the suspect’s van. Prosecutors say the surveillance shows the route Jungerman took to get from his home to Pickert’s house. The state also released an audio recording of David Jungerman’s own words.

Defense attorneys for Jungerman cross-examined the state’s witnesses, hoping to get jurors to question the prosecution’s case.

Prosecutors say a chain of events that ended in murder began in September 2012, when Jungerman shot a then-homeless man who was on his property. Pickert helped the man, whose leg had to be amputated, secure a $5.75 million judgment against Jungerman. Days before the 2017 homicide, prosecutors said Pickert filed liens on Jungerman’s home and business to secure payment in the civil lawsuit.

Pickert was killed on October 25, 2017, at 8:07 a.m. outside his family’s home. Pickert had just walked his two young sons to school with the family dog. His wife, Emily Riegel, described hearing one or more gunshots as she prepared to work inside the house. She ran outside to find that someone had shot her 16-year-old husband that day. “I was screaming for help,” Riegel said. “Scream to stop the van.”

She told jurors she saw someone in a white van put a dark mask over their face and drive away from the crime scene. A neighbor said he saw an older man with thinning white or gray hair near a white van before the shooting. At the time of the homicide, Jungerman was 79 years old.

While executing a search warrant at Jungerman’s home, police discovered a digital audio recorder in his bathroom. Prosecutors say Jungerman recorded a hearing in a separate case. Then recorded himself talking with his longtime farmhand about Pickert’s murder.

The jurors heard excerpts from the recording in the courtroom. “Hey, you know, people… People, uh, know I murdered that son of [expletive]jurors heard Jungerman say on the tape. “What bothers me a bit about myself is that when I think about it, I smile. (Laughing) This mother[expletive] caused me a lot of trouble”

“Now you know what this is about,” Jackson County Assistant District Attorney Tim Dollar told jurors. “His mobile, his van, his voice. His motive being the underlying lawsuit with a multi-million dollar judgment against him.

Jungerman’s defense argued that the audio recording lacked context. “This audio recording is not fair and accurate,” Ross told jurors. “The state, I don’t think, has any evidence to dispute that. Twenty-eight minutes are missing. Nearly 25% of this band is missing.

Prosecutors told jurors they would present a mountain of evidence during the trial. Defense attorneys called the evidence circumstantial, mishandled and, in some cases, destroyed.

Additional testimony could take some time. Prosecutors say more than 10,000 pages of investigative reports were written during the investigation.