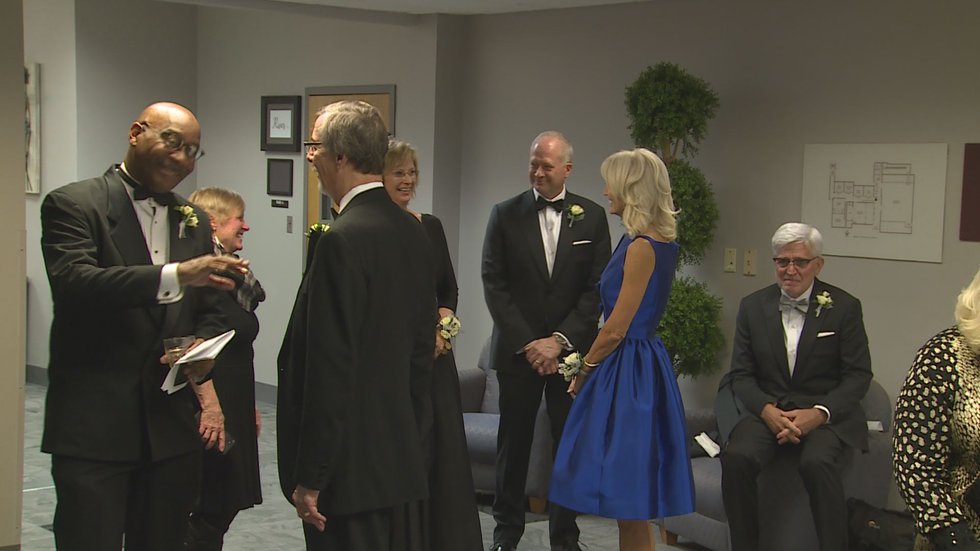 “He said the good Lord let him live a good life on Earth so he was going to do what he could to give back to society and he talked and I watched him walk,” the son said of Grant, Garry.

Frye said: “Citizens and the vision process made downtown revitalization their number one priority in 2008 and to be able to bring that to citizens and revitalize downtown to the point that he is now – really special.”

“It’s hard to describe. I was very shocked when they informed me and that’s a pretty big honor,” Strathman said.

“To be inducted with people we’ve always heard about, people who made Topeka what it is today, so it’s an honor to be on the list with everyone who’s come before us.” , said Spees.

Below are the bios given by JA from Kansas.

“Grant Ulysses Cushinberry was born in October 1921 in Nicodemus, KS and he later moved to Hoisington, KS to complete his high school education. After high school, he started working for the railroad. Seeking a way to see the world and escape small town life, he enlisted in the U.S. Army, serving as a combat medic in the Philippines from 1943 to 1947. After his honorable discharge from the army, he settled in Topeka where he worked for the Winter General Hospital now known as the VA Hospital for 30 years on the night shift and retired in 1977. In addition to his work at the VA, Grant was an entrepreneur and started his own waste management business, Cushinberry and Sons, which also served as a lawn service during the summer months, for 30 years. He was probably the most generous landlord in town, as he managed his collection of over 11 rental properties.

As if that wasn’t enough for a day’s work, he also coached youth sports in the evenings and on weekends.

Mr. Cushinberry was known for his humanitarian service in the Topeka community. For nearly 30 years, he co-founded and hosted the annual Community Thanksgiving Dinner, distributed God’s Little Half Acre clothing, food, furniture and appliances, and provided hundreds of children with free tickets. for the Arab Shrine circus and Saturday morning movies. Many people remember him as the watermelon man because he would randomly choose local elementary and high schools with all you could eat watermelon after school.

He served as president of the Kansas First Kiwanis Golden K Club, was named a Rotary Paul Harris Fellow, and received numerous honors including the 1975 Kansas Humanitarian of the Year from the Topeka Capital-Journal, the Martin Luther King, Jr. governor in 1989. and the American Legion award. A Topeka park on the east side of town is named in his honor. Washburn University named him to the Sagamore Honor Society and awarded him an Honorary Doctor of Humane Letters in 1994, while receiving the Topeka Chamber of Commerce Small Business Award the same year. He appeared on several nationally syndicated television shows, including the Art Linkletter Show and the Geraldo Rivera Show, titled “Community Heroes of 1988”. He was a frequent writer on the Letters to the Editor page of the local paper, often commenting on hot topics arising in the city and the country at large.

Grant was married to Kathryn for 27 years and they had 4 children (Terry, Rita, Garry and DeWayne), 3 grandchildren and 7 great-grandchildren. He died on July 1, 2008.

“Marvin Spees was born and raised in Topeka, KS. He graduated from Topeka High School in 1974. After driving a truck for two years, he attended John Brown University in Siloam Springs, AR, where he met his wife Debbie of now 43. After graduating with a general business degree from John Brown University, he worked for Youth for Christ International as a director of camps, conferences and ski trips for an area of ​​ten States.

In 1983 Marvin returned to help his father with the family business. In early 1985 he bought Capital City Oil from his father and his business partner. Capital City Oil is a full-line petroleum products distribution company serving commercial, industrial and agricultural customers from Kansas City to Salina.

“Vince Frye was born in Kansas City, Missouri. He graduated from Shawnee Mission North High School where he studied football, basketball and track and field. A 1971 graduate of the University of Kansas with a BS in journalism, he was a member of the track team and was elected class president.

After graduating, Vince was recruited to work for KTSB-TV (now KSNT) as an advertising account manager. In 1973 he moved to WIBW-TV where he worked as General Sales Manager until 1997. He has worked with hundreds of local businesses and numerous local and national agencies with their marketing needs.

In 1997 Vince joined FryeAllen Advertising as a partner of founders Dana Rulon Frye and Michael Allen who started the advertising and marketing company in 1989. The company grew significantly with the addition of FryeAllen Films, a video and film production company, and FryeAllen Digital, a computer animation and design company. The combined companies have won hundreds of local awards as well as national Telly and Silver Microphone awards for their creative work. The agency has helped hundreds of local clients with their marketing needs and created successful campaigns for the Shawnee County Economic Development Sales Tax, Topeka County Public Library Expansion and Shawnee, Hummer Sports Park, Great Overland Station, Charles Curtis Building and numerous political campaigns for State and National Offices and Issues.

In 2012, Vince was selected by the Board of Directors to be President and CEO of Downtown Topeka, Incorporated. The 225-member organization, established in 1964, was founded to promote, recruit and advocate for the downtown area. During his tenure as president, Frye helped revitalize downtown by helping raise more than $4 million for pocket parks, fountains, arches and statues. He has created over 35 downtown events attracting over 100,000 people each year and has been honored by the International Downtown Association, Arts Connect and Topeka Civic Theater for his contributions to the community.

In 2018, he successfully led Downtown Topeka, Incorporated in a merger with GO Topeka, Visit Topeka and the Chamber of Commerce to form the Greater Topeka Partnership. He continued to serve as DTI President and GTP Senior Vice President until his retirement in December 2020. During this time he assisted in the planning and financing of the Evergy Plaza, oversaw the plan strategic marketing plan for downtown, assisted in the creation of three historic downtown districts and the Dynamic Core Tax Increment Finance District.

Federation and as President of the Central Region (18 States) of the AAF. Additionally, he has served on the boards of the Topeka Community Foundation, Arts Connect, Topeka Civic Theatre, Meals on Wheels, GO Topeka, Topeka Chamber of Commerce, Downtown Topeka Foundation, Heartland Works, Top of the Tower, Shawnee Country Club, Visit Topeka, Topeka Rotary and the American Federation of Advertising. He was selected in the first class of Greater Topeka Leadership in 1984 and was a member of the Topeka Active 20-30 Club.

Frye has been honored by the following organizations:

Sales and Marketing Executives – Topeka Executive of the Year -2014

Greater Topeka Chamber of Commerce – Volunteer Member of the Year

Inducted into the Topeka Advertising Federation Hall of Fame in 2007

Frye is married to Dana Rulon Frye and has one daughter, Carley Frye, and one granddaughter, Bailey Frye.

“Matt is a lifelong Topekan. He graduated from Hayden High School in 1979 and earned a business degree from Emporia State. He worked for his father, Art Strathman, at Strathman Sales during the summers and started his career full-time immediately after graduating from college in 1983. He worked to learn all aspects of the business and became the sole owner in 2006.

Colton joined the family business in 2014 and is the successor director. Hunter is completing his doctorate at the University of Utah, Salt Lake City. Grayson puts his engineering degree to work for Olathe Ks at Technical Manufacturing Concepts.

Matt enjoys driving faster than necessary (on a circuit) and competing with Grayson in SCCA races. He also enjoys cycling and working on his land. His volunteer activities have included 20-30, Go Topeka, Small Business Council and Plaza Planning Committee.