Suna East MP Junet Mohammed on Sunday July 31 dismissed an alleged secret audio recording that linked him to election-rigging plans with the help of a senior Independent Electoral and Boundaries Commission (IEBC) official.

In a press release issued on Sunday, July 31, Junet reported that the viral audio was fake and doctored by political opponents to slander him and Azimio.

He accused the rivals of using the audio to garner sympathy votes ahead of the August 9 general election. The recording was posted online by UDA politicians including MP Kimilili Didmus Barasa and former Nairobi Governor Mike Sonko.

“Junet Mohamed urges the public to ignore the video, which appears to be one of the last desperate acts of a dying political campaign based on years of lies, innuendo, slander, arrogance, boobing, name-calling, insults. and now – waking up to the reality of a lost election – is looking for sympathy!” he stated.

The General Secretary of the Azimio Board called on investigative agencies to launch an investigation into the audio and apprehend the culprits.

“Junet urges investigative agencies to act quickly and investigate the case, dig up the perpetrators and bring them to justice,” he said.

In the alleged audio, a man purporting to be Junet was heard calling a senior IEBC official who promised to arrange a high-level meeting with Wafula Chebukati and other commissioners from the electoral body.

The voice purporting to be that of Azimio’s general secretary is heard, admitting to having come from the home of the “great man” who seemed unhappy with a problem he felt needed to be resolved urgently.

The leaked audio comes barely a month after lawmakers accused Kenya Kwanza director Moses Wetangula of holding a meeting with Chebukati and Inform Lykos officials, with the aim of rigging the poll.

Supporting the MP’s claims, Azimio flag bearer Raila Odinga added that there was a plot to sneak in ballot papers marked with two million votes which would be spread across 10,000 polling stations.

However, Chebukati refuted the claims calling them unsubstantiated. He further stated that he was targeted only because he and Wtangula were from the same Bukusu ethnic community.

“The profiling of the members of the commission is very regrettable. For those making these remarks, he is a Bukusu like me, we were born in Bungoma and I think that may be why they are profiling me,” Chebukati remarked. 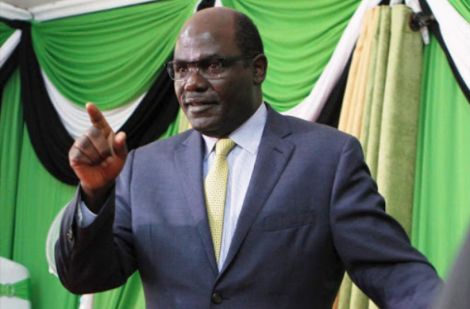 IEBC President Wafula Chebukati at a past event