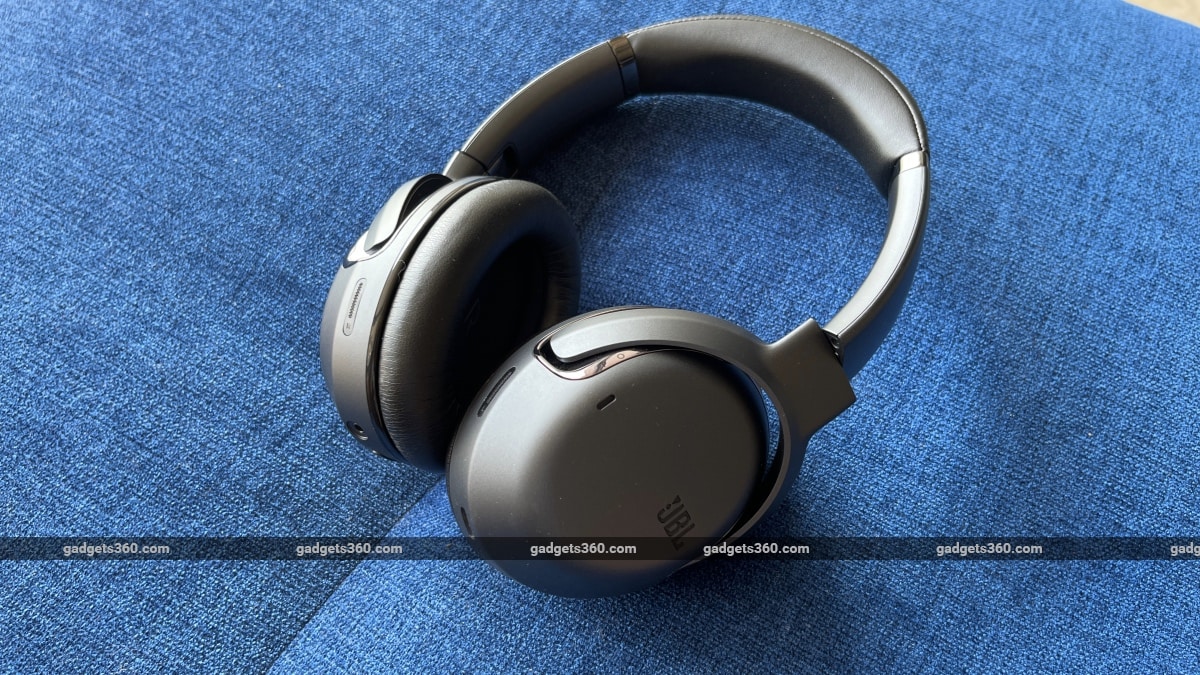 JBL may be best known in India for its wireless speakers and car audio systems, but the company’s headphones and earphones are also popular. With a wide range of products starting at under Rs. 1,000 and ranging up to Rs. 25,000, covering various functions and form factors, JBL has something to offer shoppers with just about any budget. and requirement. Today I’m reviewing the flagship of JBL’s personal audio line, the Tour One On-Ear Wireless Headphones with Active Noise Cancellation.

Priced at Rs. 24,999, the JBL Tour One offers a lot, including a good design, useful features like active noise cancellation, touch controls and app support. It promises good sound quality as well as battery life. Is the JBL Tour One a capable challenger to the current champ in this space, the Sony WH-1000XM4? Find out in this review.

At its price, the JBL Tour One faces competition from brands such as Sony and Bose

Physical buttons and touch controls on the JBL Tour One

High-end over-ear headphones are usually large enough to completely cover the user’s ears and create a snug fit with proper noise isolation. However, it helps that the earbuds aren’t unnecessarily bulky, so they’re still comfortable and convenient to wear over long periods of time. The JBL Tour One strikes that balance, with a considerably sleeker form factor than the company’s previous flagship Club One headphones.

Available only in black, the JBL Tour One is very sophisticated. The earcups and headband are mostly matte black, with reflective black striping accenting the edges of the earcups and the area just below the headband. JBL and “Tour One” logos are visible in separate locations on the headset, and the underside of the leatherette headband is padded for comfort. The headphones are lightweight and were very comfortable to wear for long listening sessions, but I had to adjust my glasses to make sure the noise isolation seal was maintained.

Power and pairing functions are controlled by a slide switch on the right ear cup of the JBL Tour One; sliding it to the middle turns the headset on, and holding it in place for a few seconds in the lowest position puts it into pairing mode. There are also dedicated volume adjustment buttons on the right ear cup and a customizable button on the left. There’s a 2.5mm jack to connect the included stereo cable for wired listening and a USB Type-C port for charging.

The JBL Tour One uses a four-microphone system for voice pickup and active noise cancellation, with two facing forward, the third facing to one side, and the fourth inside an earcup. The outside of the right atrium is tactile. You can tap it to control playback and answer or disconnect calls.

I found the touch controls a little fiddly. They were easy to trigger accidentally and sometimes didn’t register double or triple taps. There’s also wear detection that automatically pauses or resumes your music when the Tour One headphones are taken out or put on, and it worked well for me.

The JBL Tour One works with the JBL Headphones app, available for iOS and android. This application displays the estimated battery level of the headphones and allows you to customize and adjust various functions and settings such as active noise cancellation, ambient sound mode and conversation mode. There’s also a “smart audio mode” to improve audio quality, stability and latency, equalizer settings, touch controls, customizable button controls and voice assistant settings, among others.

The JBL Tour One’s programmable button can be used to control ANC and Transparency modes, or invoke the voice assistant on your smartphone

The JBL Tour One’s programmable button can be set to either switch between ANC and ambient sound modes, or summon the voice assistant on your smartphone with a long press. Besides Siri on iOS and Google Assistant on Android, Amazon Alexa is also supported. A long press on the touch area can also be set to control ANC and transparency modes, or activate the talk-through function which quickly lowers the audio volume and allows conversations to be had.

This is a very functional application, allowing you to configure the JBL Tour One exactly as you wish, and also to update its firmware when needed. One thing to note is the ability to adjust the active noise cancellation and transparency modes just as quickly to suit the environment, and I often found myself tweaking the EQ to find the right settings for the genre of music. particular that I was listening to.

The JBL Tour One features 40mm dynamic drivers and uses Bluetooth 5 for connectivity with support for SBC and AAC Bluetooth codecs. The lack of support for advanced Bluetooth codecs is a little disappointing at this price. The frequency response range is 10-40,000 Hz (when used in passive mode with the stereo cable) and 10-22,000 Hz when used with Bluetooth. The retail package includes a hard carrying case, stereo cable for wired connectivity, airline adapter and charging cable.

The JBL Tour One’s battery life was excellent. It ran for around 30 hours on a single charge with active noise cancellation and the volume at moderate levels, but that will vary a bit depending on your usage. Charging was also fairly quick, with the headphones reaching a full charge in around two hours when using the supplied cable and a 10W power adapter.

Clear and balanced sound on the JBL Tour One

High-end headphones expect good sound quality, and the JBL Tour One more than delivers on that, with a refreshingly neutral and adaptable sound. That said, the lack of support for advanced Bluetooth codecs held these headphones back a bit when it comes to sound detail and definition, depending on the source device.

I’ve used the JBL Tour One for music, calls, and video content with an iPhone 13 as my primary source, but I’ve also paired these headphones with an Android smartphone and MacBook Air on occasion for reference. It’s possible to optimize the sound for specific functions like listening to music or watching videos, using the app, and it seems to help improve each use case a bit.

My first impressions of the JBL Tour One’s sound quality were fairly neutral, but over time, and listening to music across a wide range of genres, I’ve grown to like its balanced sound. While listening to Wherever You Go by The Avalanches, I appreciated the headphones’ ability to adapt to its varying rhythm. This track’s slow vocal-based buildup sounded smooth and refined, and the headphones still matched its faster rhythm sections almost seamlessly.

Clear, balanced sound is refreshing and enjoyable, but the lack of advanced Bluetooth codecs holds the JBL Tour One back a bit

The lows sounded relaxed, but had just enough attack and punch to not get lost in the much more capable mids and highs. This adaptable and flexible approach to sound was evident even in faster tracks such as Yeke Yeke by Stylo and Space Motion, giving the fast pace just enough punch to be heard alongside the catchy traditional African vocals of Guinean singer Mory Kante.

It certainly helped keeping active noise cancellation and volume on the higher side – around the 80% mark – to get the best nuance and character out of these headphones.

The level of detail on offer and the lack of full drive and attack set the JBL Tour One back a bit, compared to similarly priced competitors such as the Sony WH-1000XM4. The Tour One strives to bring fun to the table, and listeners looking for balance and a lack of “tampering” in sound will appreciate the JBL Tour One’s sonic signature, but it just lacks a little at the top.

Active noise cancellation on the JBL Tour One was good, as you’d expect from high-end headphones. It’s more suited to typical outdoor noise and wasn’t as impressive indoors. That said, there was still a noticeable reduction in typical household noises such as the hum of a ceiling fan, but the Tour One didn’t silence those sounds as effectively as some competing products. Voices and activity sounds were a little softer.

Outdoors, especially when walking down the street, the JBL Tour One did a good job of reducing noise, allowing me to listen to music and audiobooks clearly. I was also able to carry on appropriate conversations during phone calls. Ambient and conversational sound modes let you hear your surroundings without having to remove the headphones, but the sound feels a bit artificial and unnecessarily amplified in noisy environments. Bluetooth connectivity on the headset was stable at distances up to 4m for me.

The high-end wireless headphones segment is largely dominated by a handful of brands such as Sony, Apple, and Bose. As an established name in the headphone industry, this price segment has been sorely lacking a capable option from JBL, until now. The JBL Tour One is, in my opinion, a pair of wireless active noise canceling headphones for Rs. 25,000. It offers a clean and balanced sound signature, good active noise cancellation outside, excellent battery life and great features, including a great, detailed companion app that lets you tweak the headphones to your liking.

It’s also a very nice and comfortable pair of headphones, but it’s held back in several notable ways, including lack of support for advanced Bluetooth codecs, slightly fiddly controls, and a certain lack of detail and attack in the sound. Active noise cancellation, while decent, isn’t quite class-leading on these headphones. It officially costs around Rs. 5,000 less than the Sony WH-1000XM4, and with that price difference it might still be worth considering the JBL Tour One.

Sidaka had one foot in the door of Chicago hip-hop, and he opened it with Coming Back Home