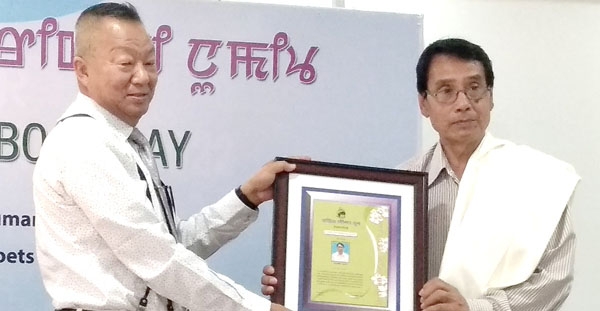 IMPHAL, Apr. 23 (DIPR)
The Heisnam Basantakumar Prize 2022 was presented today to eminent writer Naoribam Indramani during the World Book Day 2022 celebration at DIPR Auditorium, Keishampat.
The function was organized by Sahitya Thoupang Lup (SATHOULUP), Imphal, Manipur.
The award was instituted in memory of the late Heisnam Basantakumar by his son Heisnam Balkrisna, Director of DIPR and his family. The prize carries a sum of Rs 10,000/-, a citation and a shawl.
It can be mentioned that in his short period of life, the late Heisnam Basantakumar (1950-1990) wrote a novel titled “Mongpham” and a poetry titled “Basanta Paojel”.
Speaking at the event, litterateur Kangjam Radhakumar, IAS (Retd) said books written before the advent of Hinduism are considered a forgotten chapter among the people of the state and “we must venture into the history of Manipuri literature. We need to bridge the gap of Manipuri literature by exploring written records,” he added.
He added that the habit of reading books among young people has declined with advances in technology. “The world is in our hands today due to advancements in technology and we need to be in that flow. This is the time of e-books and e-libraries and we need to download books written by prominent writers in the state to respond to global audiences,” he added.
Ksheterimayum Subadani, president of Leikol, said that the translation of books “written in our language is very important to bridge the gap caused by the language barrier. SATHOULUP must organize a program for writers in the state to give them visibility and a platform for their works.
An English to Japanese to Manipuri dictionary compiled by Ph Nandakumar was also released during the function.
Various poets also read poems on the program.
It can be mentioned that World Book Day is celebrated every year on April 23 to honor the great works of authors around the world. This special day has been marked by the United Nations Educational, Scientific and Cultural Organization (UNESCO) as an attempt to promote the love of reading, writing books, translating, publishing and copyright. This year, “World Book Day 2022” is celebrated under the theme “Read… so you never feel alone”.
Heisnam Balkrisna, Director, IPR, Saratchand Thiyam, Advisor, SATHOULUP, SATHOULUP members, literature lovers and others attended the ceremony.

I love an LP, but spare me the Vinyl Snob that goes like a broken record | Barbara Ellen