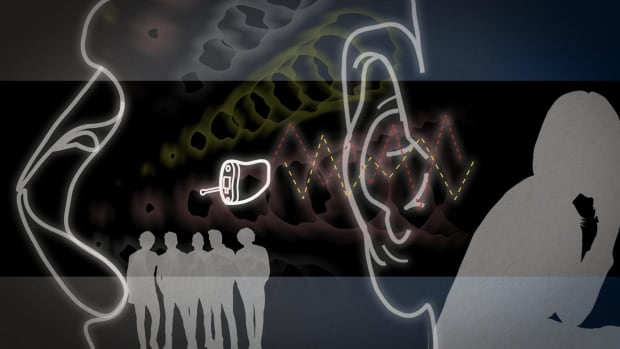 This first-person article is by Jennifer Chrumka, a radio journalist based in Kamloops, BC. For more information on CBC’s First Person Stories, please see the FAQ.

It was a cool morning early last spring and I was interviewing a rancher about his concerns about the upcoming wildfire season in the British Columbia interior. We were driving through patches of snow and through a bunchgrass pasture when we noticed a Skylark sitting on a fence post. She commented on her beautiful song and we fell silent as I held out my mic to pick up her voice. But when I turned up the volume on my recording device, I heard nothing.

The moment solidified something I had long suspected: I’m losing my hearing. And that marked the moment when I began to fear the imminent end of my vital link to the world I love – that of radio journalism.

For as long as I can remember, I’ve had a deep relationship with sound because I know how precious it is. Since childhood, I have been deaf in my left ear, a rare side effect of a trivial infection. I miss casual conversations a lot and learned to read lips and navigate my way through social settings as friends and family participate in choreographed dances to get on my “right side”.

That’s part of what drew me to a career in radio. I go about my working days in headphones and when I’m out in the field I pick up sound with a shotgun microphone and control the volume closely. I can waste hours in the studio mixing and layering audio, creating documentaries that bring stories to life for listeners.

I developed a reverence for the sounds I collected: the voices of the last nuns of a dying order singing songs of worship in a hospital chapel; the lowing of cattle being transported up a mountain by a young woman whose dream is to take over the family ranch; the deep voice of former Kwikwasut’inuxw First Nation Chief Haxwa’mis standing on an inlet calling home the rare run of sockeye salmon. These recordings are layered with a range of human emotions, along with deep breaths, sighs and awkward laughter that reveal as much as the words they punctuate.

The year 2020 saw the lowest return of sockeye salmon to the Fraser River in British Columbia since record keeping began in 1893. The Pacific Salmon Commission reports that only 288,000 sockeye have returned. That, compared to peak years when more than 20 million salmon would return, has many people worried. 24:03

A few months ago, I consulted an audiologist who confirmed my unilateral deafness. She also said the hearing in my right ear was mapping to the lowest point of the normal range and may continue to decline. She suggested a type of cross-system hearing aid that would cost several thousand dollars. I didn’t pause before saying “yes,” dreaming of not having to bend over to hear my daughter’s voice and hoping that would allow me to hear the world in all the depth I wanted.

But when I was finally fitted with hearing aids, the world didn’t become crisp and clear. Instead, it was shrouded in static with high-pitched, metallic accents, like I was sitting in an airplane ready to take off.

My audiologist told me my brain would get used to it and would come back for further adjustments. I walked out of his office completely disoriented by the din in my ears.

Over the past few months I’ve tried to get used to the new way things sound, but it’s exhausting. Although I’m more adept at catching the conversation in small groups, it’s hard to sort through the symphony of chaos playing through my headphones when I’m on assignment. A voice no longer dominates a set of tinkling keys in one hand; the sound of my shoes walking on a sidewalk comes back to me abnormally.

It also changes my journalism, as I move from audio to writing.

On radio, there’s an intimacy that comes with hearing another person’s voice or the gentle murmur of the ocean right in your ear. It can transport the listener to another world. Now I try to recreate those moments in words – the pauses and silences, the way the wind rustles through the quivering aspens when the leaves are dry in the fall, or how with the first big snowfall, there is a feeling of stifled stillness. My reverence for sound is still there, but I’m learning to express it differently.

And just as the loss of hearing in my left ear as a child made me appreciate the world of radio, accepting its decline in my right made me cling to everything I still hear. . I listen more intently than ever, enjoying valuable connections to the world around me.

Do you have a compelling personal story that can provide understanding or help others? We want to hear from you. Here is more information on how to introduce ourselves.