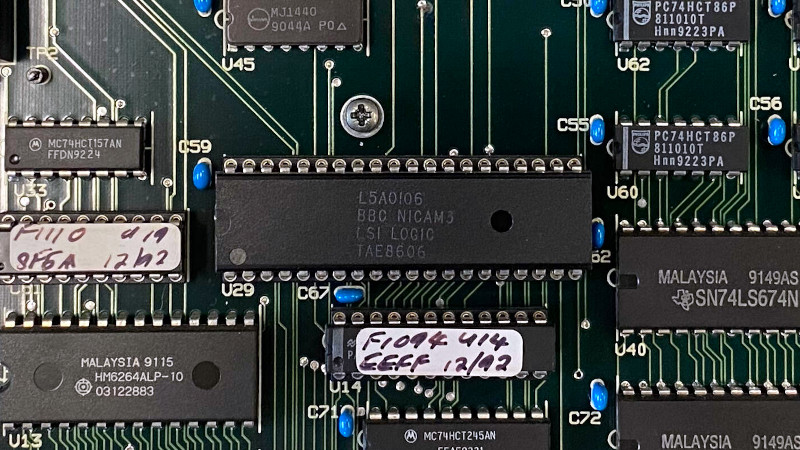 Running a radio station is, at first glance, a simple technical challenge. Build a studio, connect it to a transmitter and you’re good to go. But what happens when your station isn’t a single Rebel Radio-style hilltop facility, but a nationwide chain of transmitter sites powered by a variety of city-based studios? This is the problem facing the BBC with its national chain of FM transmitters in the UK, and since the 1980s it has been fed by a series of NICAM digital data streams. We mentioned in 2016 how the aging equipment had been replaced by a modern FPGA-based implementation without any listener noticing, and now thanks to [Matt Millman]we get to see a teardown of the original 1980s units. The tech is relatively easy to understand from a 2020s perspective, but it still contains a few surprises.

In every studio or transmitter site there would have been a 19″ rack containing one of these units – a card frame with a collection of encoder or decoder cards. These are all bespoke manufactured by the BBC’s engineering department to a very high standard and use period parts such as the familiar Z80 microprocessor and some Philips digital audio chips, which enthusiasts of big audio high-end audience can recognize. As you would expect for a critical device, many functions are duplicated for redundancy, with their outputs compared to warn of failures.

The surprise comes from the NICAM encoder and decoder – this is a custom LSI chip designed exclusively for the BBC. This indicates the budget available to the national broadcaster, and given that these units have been operating in some cases for over 35 years, one would guess that the license payers got their money’s worth.

You can read more about the initial switchover in 2016, and a bit more about NICAM as well.