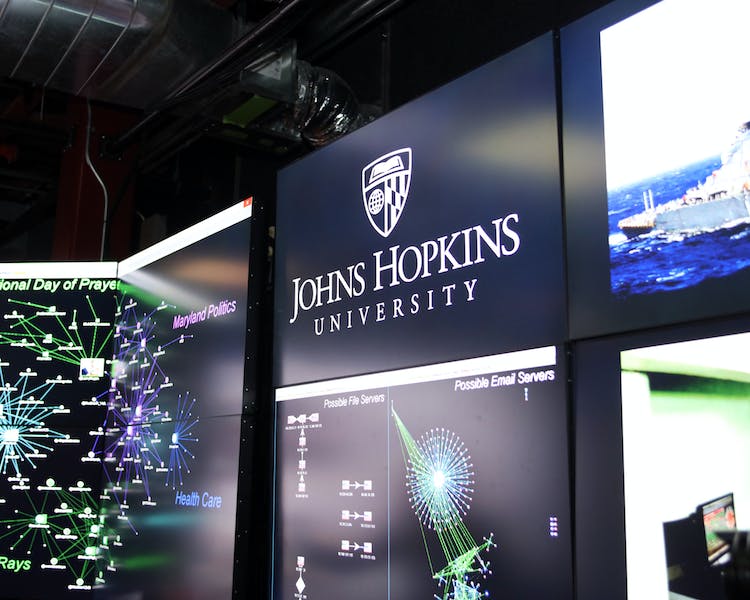 Hopkins will not accept responsibility for failure of students with disabilities

I am a graduate student of the Engineering for Professionals (EP) program and am disabled. I wrote earlier this summer summarizing my experiences with this department. I would like to talk about a particularly bad math class I took in the spring of 2019. My previous teachers had mostly been negligent in honoring my disabled accommodations, but before this class no one had been violent or violent. bad.

My teachers are supposed to wear a small bluetooth microphone. Let’s call her “Alice.“Alice is a lightweight, large thumb-sized device that attaches to a collar or lanyard and streams Bluetooth sound to my hearing aids, which control her. With Alice and a speaker whose face I can see, I experience clear speech.

The professor was supposed to arrive 15 minutes early on the first day to work out the logistics of where to cut Alice so that she could best pick up the professor’s voice. If the teacher arrives early, I also explain that they shouldn’t take Alice into the bathroom; it’s not waterproof, it transmits up to 80 feet (some noises I don’t need to hear) and they should remove it if they want to talk privately with someone. Beyond that, I control Alice through my hearing aids, and their only responsibility is really to wear her.

This professor did not arrive early. I walked over to him in the hall as he rushed over and tried to explain Alice. He ripped it off, put it on top of her to snug against her throat, and walked in to teach.

A microphone pressed against your throat loses harsh consonants, all of which are created by the tongue, teeth, and lips. Worn like this, Alice doesn’t work for me. I ended up missing the first lecture a lot.

But I heard part of what he said.

The professor read aloud the University’s Disability Services Disclaimer, then added, “This course cannot be recorded except: Unfortunately, for disability purposes. I was the only student with a digital recorder in front of me, its little red light flashing.

My disabilities are mostly invisible. He declared me disabled and declared me a nuisance in one sentence.

In a strange turn of events, he became eager for me to use a theater microphone instead of Alice. The fact that Alice was forced to work with my hearing aids and was recommended by my audiologist didn’t seem to convince him. He thought he was an actor and said he was more comfortable with theater equipment.

This teacher liked to give lessons in front of the blackboard. I also rely on lip reading, so I emailed the PE disability coordinator during the first class. The coordinator agreed and added it to my accommodation list. He still refused to look forward.

Before almost every class, I would ask him to turn forward, and he would tell me that was not a reasonable request; therefore, he did not have to. I have often emailed my disability coordinator about this. Nothing has changed.

Unfortunately, lecture tapes don’t do much to me unless I understand what was said the first time around. The textbook wasn’t much use either – it mostly taught from its head.

Weeks passed. I was late.

I finally told the EP director that my teacher was still not looking forward. She said I was not “proactive” enough. I said I spoke to the disability coordinator on the first day of class. Then she moved the goal post calling me “insistent” and saying I shouldn’t expect him to change her teaching style.

The department head moved our class to a room with an electronic whiteboard so he could draw while looking forward. He used it a bit but always fell back on the regular whiteboard.

I even started hiding the markers before class, but he always seemed to find some.

Finally, I contacted a lawyer from the Office of Institutional Equity (OIE), the civil rights arm of the University. At the time, the OIE still heard complaints about disability. The lawyer for the OIE agreed to ask the professor to turn to the front. He still refused to look forward. I thought there was nothing more to do. For a few more weeks, I took advantage of it.

Then I complained one last time to my manager. She claimed he told her he was facing forward when he lectured. In practice, it seems that the PE only cares about ending discrimination against students if the OIE gets involved.

At that point, the semester was half over and I had missed a lot of material.

A few weeks later, the professor began to pat Alice. Do you know how painfully loud pressing a microphone can sound? Well it hurt so much I had to take my hearing aids off.

My hearing aids are part of me. Forcing me to remove them is a personal violation. I asked him to stop, but he didn’t want to. So I put up with it for the rest of the semester.

At that point, I was scared and felt quite friendless. Even though I viewed his behavior as physical abuse, and I’m pretty sure it was retaliation for the trouble I had caused him, I didn’t tell anyone about it at the time. I just wanted to finish the course.

I thought the final draft might make up for my poor mark on the midterm exam. (I did an A on the other main project.) So I worked hard, saving every drop of extra credit.

During the last lesson, several people asked for an extension on the final project. The professor gave everyone an extension. I thought I heard the revised date correctly. (To me, a lot of ordinal numbers look the same … fourth, fifth, twelfth, fourteenth, fifteenth …) I have not checked.

Another of my disability arrangements that Hopkins had approved – a long time ago – is that I need to get all important information in writing. Due dates, anything noted. The professor finally emailed me with the correct due date – the day before the final draft was due. Unfortunately, I only saw it after rendering the final draft. It was considered late; he didn’t count it in my grade and I got a C in the course which put me on academic probation.

Yes, I should have checked my emails. Maybe I should have borrowed more notes from my classmates. But I had basically missed much of the first half of the semester because the teacher was not facing the front – this has been documented.

I thought Hopkins couldn’t be unreasonable enough to leave this note in place. But no. The man who caused all the problems was the final arbiter. And he did not respond to inquiries.

On the Friday before Labor Day 2019, I filed a formal complaint against this professor with the OIE, including complaints against other EP professors who failed to provide the disabled accommodations approved by Hopkins and the head of the EP.

The OIE replied on the following Thursday: No reason to investigate.

Thus, if an EP teacher does not provide accommodation for people with disabilities for half of the semester, which greatly contributes to a student being late, EP will not take responsibility for this. I’ve seen this play out over and over in my lessons. They just don’t care.

It is difficult to know how prevalent discrimination and access issues are for higher education students as this is an area rarely studied. JHU’s Student Government Association (SGA) contacted me after my previous article and is currently posting a survey on handicap @ Hopkins.

This survey is for everyone. Disabled, or not. Please fill it out. https://cglink.me/2dh/s55915

Laurel Maury is currently a graduate student in the Hopkins Engineering For Professionals program. She works in information technology in Maryland.

They are investigating the police murders. Their record is missing.