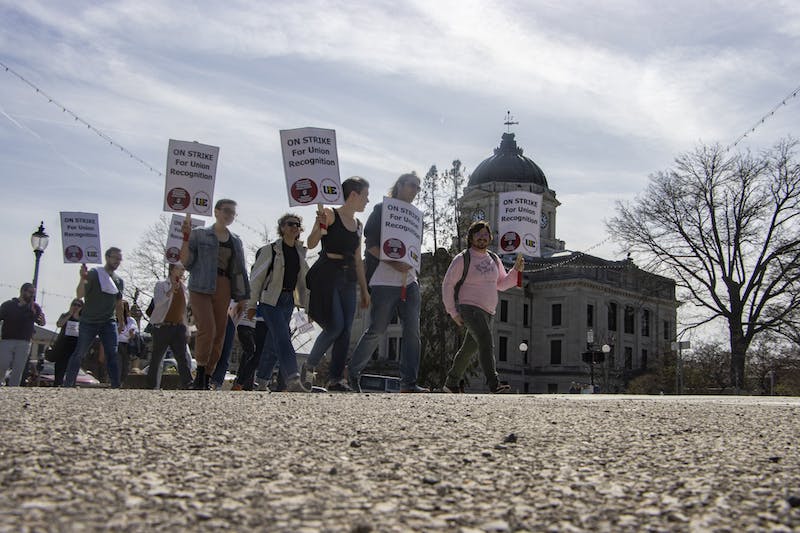 On Sunday afternoon, the auditorium of the Monroe County Public Library was overflowing with more than 150 graduate workers gathered for a town hall. After raising their fists and shouting “vote yes,” graduate workers took out their phones to vote as virtual polls opened for the Indiana Graduate Workers Coalition-United Electrical Workers strike authorization vote.

The results could determine whether graduate workers go to the picket line and begin striking on Wednesday, unless the university averts a strike by responding to IGCW-EU demands.

The organization is seeking union recognition from the university to represent graduate workers in a collective agreement with the administration.

“Graduate employees are ready to talk,” IGWC-EU organizer Sam Smucker said after Sunday’s meeting. “We have been ready to discuss for three years.”

But graduate workers are also ready to strike, he said, if the IU administration does not speak with the IGWC-EU.

Virtual polling stations will remain open until 3 p.m. Monday, for a total of 24 hours. The IGWC-EU organizers will check for duplicate or unauthorized votes before announcing the results.

If the vote passes and the university fails to meet with IGWC-EU, the graduate workers will continue with the picketing program they drafted April 13-15.

According to a PowerPoint presentation given at the town hall, more than 1,000 graduate workers have already pledged to join a strike, including more than 650 associate instructors.

More than 450 faculty members have pledged to remain neutral in their treatment of graduates who choose to strike, and more than 20 departments have pledged not to retaliate against strikers.

The IGWC-EU plans to hold votes at least once a week on whether to continue the strike.

After Sunday’s meeting, graduate workers marched through downtown with signs that read “On strike for union recognition” before celebrating at Switchyard Brewery.

Not only do organizers hope the activities will encourage more people to join the picket lines, but they also see the celebration as a form of protest against a system that weakens them, explained IGWC-EU organizer Valentina Luketa and President of the Graduate and Professional Student Government, in a speech. at Sunday’s town hall.

“It’s important to be together in joy,” Luketa said. “The world is watching us.”

7 kids headphones to do your little ones’ ears a favor