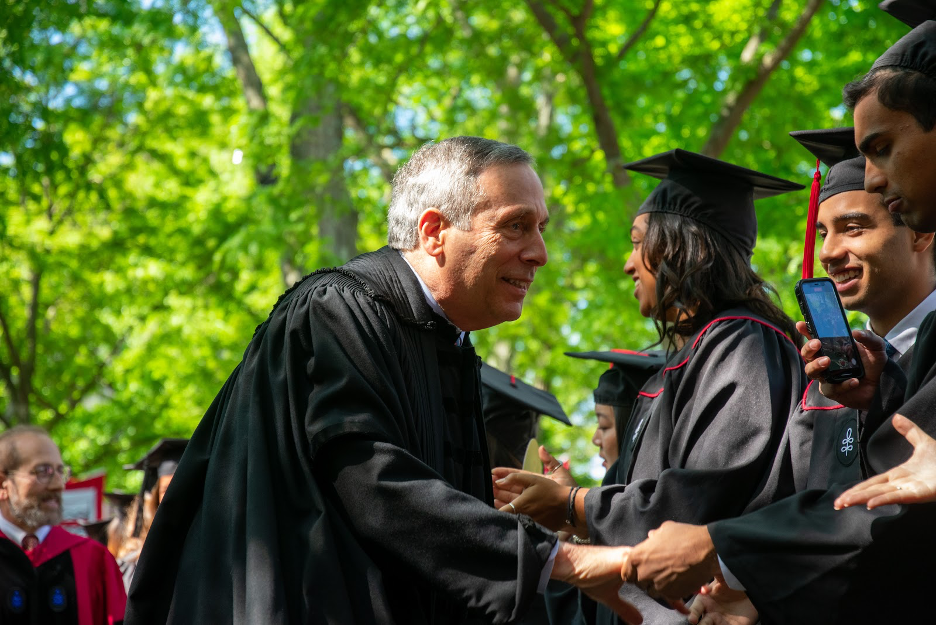 Last summer, Harvard University President Lawrence S. Bacow announced he would step down by June 2023, marking the end of an unusually short and tumultuous five-year tenure as chief executive of Harvard. Before the next academic year, we will lose the crimson devil we knew: the ubiquitous and familiar, if often frustrating, face of our university.

With nearly two full terms to go, Bacow’s legacy isn’t quite set in stone. Yet there is no doubt that his tenure as president of Harvard will be remembered for the amount and difficulty of the extraordinary challenges he faced, and for his partial success in overcoming them.

Midway through Bacow’s tenure, a deadly global pandemic shut down the world. Harvard was forced into crisis mode: campus evacuations, online schooling, and employee status against the backdrop of a physically empty campus became hot issues. Looking back, the University’s response to covid could have been much better. At the time, however, little information was available to directors and executives, who were largely forced to blindly fly through the proverbial storm. We stand by our precedents in support of Harvard’s decisions that we feel protected and prioritized by faculty, staff, and students, and are grateful for the tough decisions Bacow undoubtedly made at the time in our interest.

Bacow’s defense of the student body didn’t end with Covid: When the State Department initially refused to issue visas to international students taking online classes due to the pandemic, Bacow stood firmly and vocally opposed the decision and played a significant role in overturning the policy. In doing so, he kept the student body whole and protected some of its most vulnerable members, and we particularly appreciate this use of his personal advocacy. Bacow also oversaw an unprecedented expansion into STEM with the opening of the SEC, a $1 billion investment that is sure to broaden and enrich academic life at Harvard.

But Bacow’s administration has not always been so responsive. As for the various campus divestment moves, Bacow failed to provide timely or even post facto support to some of Harvard’s most notable student organizers. When the University, under his tenure, finally agreed to divest from fossil fuels and withdrew its investments in the externally traded funds that concentrated our private prison assets, President Bacow had an unprecedented opportunity to win the respect from our peers. Instead, his controversial past statements and refusal to recognize the student activists he decried when announcing the policy change unnecessarily antagonized advocates. By refusing to acknowledge divestment activism even amid what was objectively good news for the group’s base, Bacow turned a proud high point of campus activism into an under-celebrated and bittersweet event.

Although the Legacy of Slavery Report he piloted was a step in the right direction toward justice and an unusual recognition of Harvard’s role in historic oppression, we found he lacked concrete ambitions and were frustrated that he did not not recognized the potential of a project of this magnitude. We are also disappointed with its lack of response to calls from students for other on-campus issues, such as the much-desired multicultural center.

But none of these issues are as disappointing as the campus diversity setbacks we may yet experience under Bacow’s presidency. An adverse Supreme Court ruling in the anti-affirmative Student Fair Admissions lawsuit against the University is likely only months away. Although the case did not start during his tenure, it will likely be linked to his name due to the media coverage the case received while he was president. Although he has a limited role, we believe his name is likely to become inextricably linked with reversing decades of affirmative action admissions at America’s top universities.

Harvard presidents must walk a fine line between administrator and scholar, satisfying a range of political, educational, and institutional responsibilities. If his predecessors showed an excessive leaning towards either extreme, Bacow charted a tight and steady course through the middle, offering little to no explicit glimpses of his personal views (free speech! support Ukraine!), while proving to be a surprisingly capable administrator. Overall, Bacow’s record wasn’t bad, considering the devastation—global pandemic, protests against racial injustice, decaying democracy, attacks on our admissions system—that his administration has faced.

This might seem at odds with our usual critical views of administration. But this is not the case.

As an editorial board, we have an idiosyncratically adversarial relationship with Harvard administrators. They repeatedly find themselves in our crosshairs, under attack for lackluster responses to sexual assaults, poor messaging on critical issues, and irresponsible investment decisions. President Bacow, as the most public-facing university administrator, has rarely escaped our scrutiny.

This dynamic is not bad in itself, nor new. Our editors are young students with little real power over university policy; we are idealists who propose, at best, lofty and ambitious political goals of varying feasibility. University administrators, including the presidents of Harvard University, actually control the levers of our institutional politics and know their seemingly crippling complexity – proving, in our eyes, too content with an unsatisfactory status quo.

Larry Bacow’s presidency epitomizes this old-fashioned approach. We think it likely that he sometimes viewed our editorial board as pretentious and excessively legitimate, a handful of spoiled, naively ideological students with little experience and an excessively large microphone. We certainly haven’t always viewed him as an unwavering guardian of the best interests of our peers.

This made our rhetorical dynamic very controversial. It’s also, for the most part, how things are supposed to work: students across campus push for radical reform, administrators refuse but eventually tend to give in and accept some sort of compromise. Sometimes the progress made is substantial, sometimes not. The standoff for a better campus continues.

Bacow’s tenure may be remembered as that of an old-school president on a new-age campus. He was enamored with the art of nuanced moderation, sometimes seeming more enthusiastic about political constraints than their possibilities. Its student body, current society included, was increasingly dissatisfied with this approach – dissatisfied with the lackluster response to a global toll on police brutality, dissatisfied with the departure of top black professors, dissatisfied with a personal brand that seemed built on a condescending attitude towards deep reform.

But Bacow’s approach had its own silver linings. The President’s commitment to free speech has never excluded our criticisms of his missteps – criticisms that we will continue to engage in in the final year of his term. This also extended, remarkably, to comments he vehemently disagreed with. Last year, at a point of scrutiny from our own board – at a time when our criticisms ranged from sitting senators at former university presidents – and despite public pressure on the contrary, President Bacow reaffirmed his commitment to press freedom and our own editorial independence. That he did it while expressing his disappointment with “the quality of the speech” on campus was just another example of his predictable and endearing personal style.

This kind of decisive adherence to certain ideals, even ideals that we do not necessarily profess in the same terms – such as his strict and purist understanding of freedom of expression or his progressive approach to change – is rare and deserves to be greeted. It represents a kind of remarkable ideological consistency that we may one day miss.

This staff editorial represents the majority opinion of the Crimson editorial board only. It is the result of discussions during the regular meetings of the editorial board. To ensure the impartiality of our journalism, Crimson editors who choose to voice their opinions and vote at these meetings are not involved in reporting stories on similar topics.

Do you have a suggestion, question or concern for The Crimson Editorial Board? Click on here.