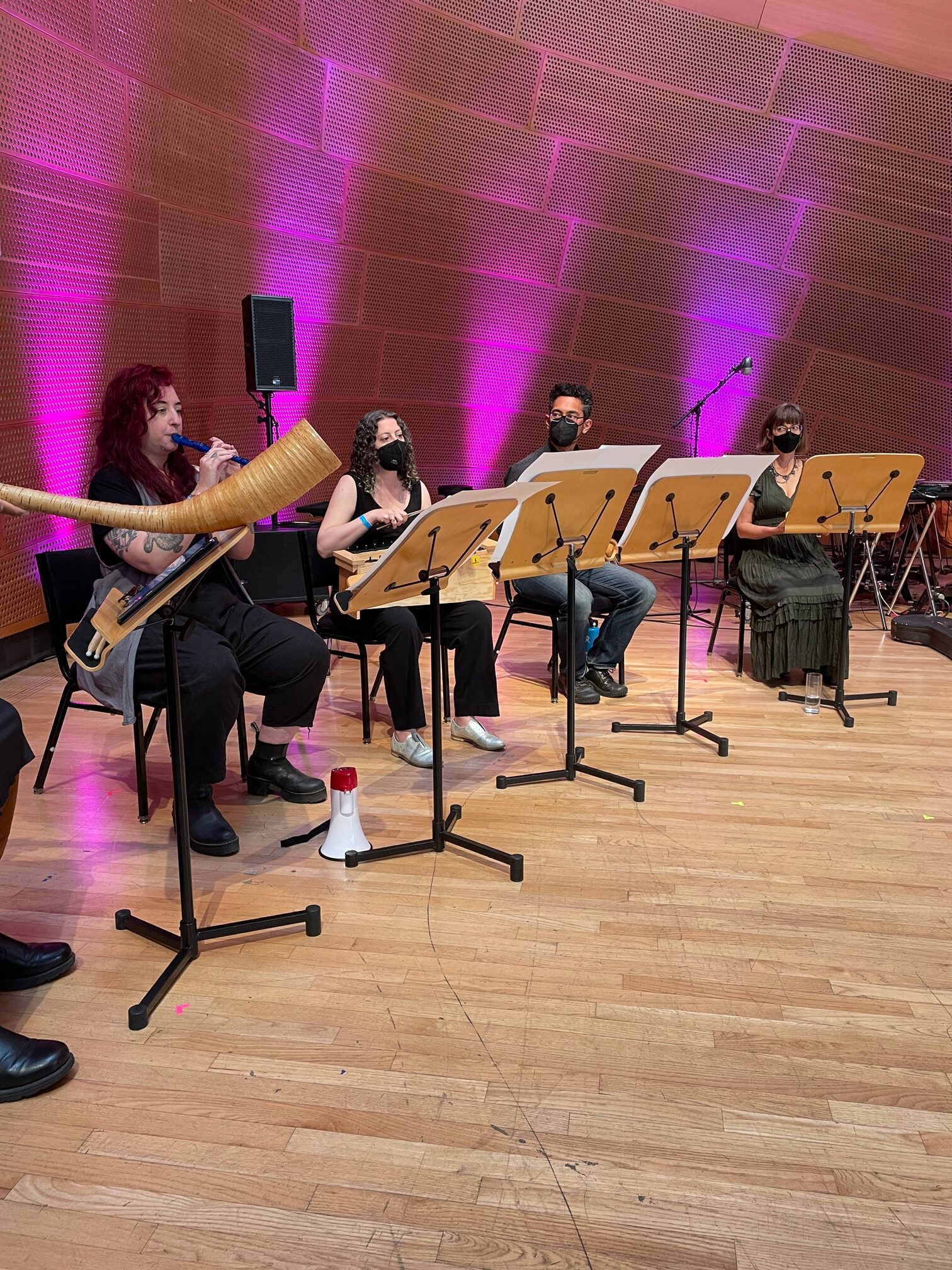 From noon to midnight – Part 1

On Saturday April 9, after a two-year hiatus imposed by the pandemic, the From noon to midnight: a day of new music the event returned to the Disney Concert Hall sponsored by the Los Angeles Philharmonic. This popular open house features new local bands and shows throughout Disney Hall. It’s informal, inexpensive, and a chance to catch up with musician friends and hear a variety of new sounds. The LA Phil commissioned a number of plays and their New Music Group also performed. The many offerings overlap, so you can’t hear it all, but with 12 hours of new music scheduled, there’s something for everyone.

Beginning exactly at noon, Tuning Meditation, by Pauline Oliveros, was directed by Clare Chase in the cavernous space of BP Hall. As the audience progressed, small printed cards were handed out containing the entire score of Tuning Meditation. Ms Chase explained that it was an audience participation piece and read the sheet music instructions: “Using any vowel sound, sing a tone you hear in your imagination. After you have contributed your pitch, listen to someone else’s pitch and tune to their pitch as exactly as possible Continue by alternating between singing your own pitch and tuning to the pitch of another voice Introduce new tones to will and tune into as many different voices as there are.

Ms. Chase began with a clear tone and began to walk through the gathered audience who were all on their feet and dispersed in space. There were several hundred people present and as many were skilled musicians, a variety of beautiful tones quickly emerged. Different pitches swelled and subsided as new and exquisite harmonies spontaneously appeared and evaporated just as quickly. Layers of voice enveloped the participants and the transcendental connections between this cloud of human voices were very moving. The normally difficult acoustics of BP Hall were fortunately not an obstacle to the intimate exchange of musical emotions emanating from so many voices. The Oliveros concept of deep listening is nowhere better exemplified than with Tuning Meditation – so simple, yet so effective.

Then the Southland Ensemble and the players formed a large semi-circle to play A simple opera, by Ben Patterson. It featured a narrator who began by speaking simple declarative sentences into a microphone, followed by an escalating series of honks and short plinks from surrounding instruments. As the piece continued, the spoken phrases became shorter while the instrumental bursts lengthened. This simple technique had the unexpected effect of happily engaging the audience. The narrator’s words boiled down to a brief explanation of the play and a warm welcome to the Noon to midnight Event.

The Southland Ensemble made some quick setup adjustments and quickly began “Paragraph 2” from the Great learning, by Cornelius Cardew, the English experimental composer. The ensemble was divided into three bands, each with a drummer, lead vocalist and backing vocalists. The text of the piece is derived from an English translation of the words of Confucius and each singer sings a phrase while the other groups respond. All of this is independent and indeterminate, with great freedom of interpretation. There is no common tempo or pulse. Drummers individually select a rhythm from a list notated in the sheet music, then modify it as needed. The lead vocalist of one of the bands begins by singing a phrase through a megaphone and this is backed up by the other vocalists of that band. This call is then answered by the other two groups, often simultaneously and in pleasant harmony.

The combination of the independent drums and the call of the singers creates a wonderfully primal feel, as if we are attending an important tribal assembly or ceremony. The vocals and drums are continuous, but never become repetitive or tiring. The entire Great learning is very long and only “paragraph 2” has been played here. Loud drumming and the use of megaphones for vocals proved equal to the acoustic distractions of BP Hall, and the performance was carried clearly to the back of the space. This seemingly elementary and disorganized work, performed convincingly by the Southland Ensemble, packs a remarkable emotional punch; another example of the supremacy of the simple over the formal.

A little after 1:00 p.m., pianist Vicki Ray performed a five-piece set outdoors on the terrace in the Keck Amphitheater. The first was Improvisation and fugue by Alfred Schnittke and it opened with dramatic, dissonant chords followed by trills and series of rapid notes. Strong dynamic contrasts brought out a dark and mysterious feel, and the amplification system was effective in bringing the sound of the grand piano to the audience. A few bars into the “Fugue” section, and just as a nice groove was developing, there was a sudden mechanical malfunction inside the piano. Still the consummate professional, Ms. Ray calmly resolved the problem and relaunched the second section, whose increasing complexity turned into a formidable technical challenge. There was no loss of precision or focus, however, and the piece ended quietly.

Majestic, composed by Wadada Leo Smith followed, and it started with a deep bass riff accompanied by short, fast passages in the middle registers that produced a grand feeling with just a hint of mystery. As it unfolded, an interesting back-and-forth between lower register notes and sharply opposed upper passages added an additional layer of artful complexity. A few minutes in Majestic, the afternoon sun found space in the tarps and was now shining directly into Mrs. Ray’s eyes as she read the score on her iPad. Fortunately, this didn’t lead to a noticeable reduction in the sharpness of his performance, which ended without incident. Impromptu (A deux mains), by Mauricio Kagel was next and it featured rapid bursts of notes followed by slower, more deliberate sections. A similar theme was then repeated in the middle and lower registers and the piece oscillated between fast, playful phrasing and slower, more dramatic phrasing.

A solo piano by Cecil Taylor from Life as… followed, as transcribed and noted by Kaja Draksler. Who but Vicki Ray would even attempt to play such a thing? The piece was filled with a breathtaking variety of grace notes, ornaments, styles and fragmentary quotes, all played at a blistering pace. You could hear that Taylor’s improvisation worked off phrases and riffs from the original accompaniment, so he was constantly dipping and spinning in unexpected directions. Absent its original context, the piece had a slightly jerky feel, but it was a memorable performance nonetheless. Who knew that eye and hand could be nimble enough to recreate such a masterful improvisation?

The set concluded with Ligeti’s Caprice No. 2 and it was full of ups and downs, a pleasant lightness and a lot of energy. With its active, playful feel as well as a lively, engaging sensibility, this piece practically screamed “Capriccio.” With everything Ms. Ray had been through so far, her acting did not disappoint.

Please read Mark Swed’s fine review of Noon to midnight in the LA Times for its excellent coverage of many tracks I haven’t been able to hear. 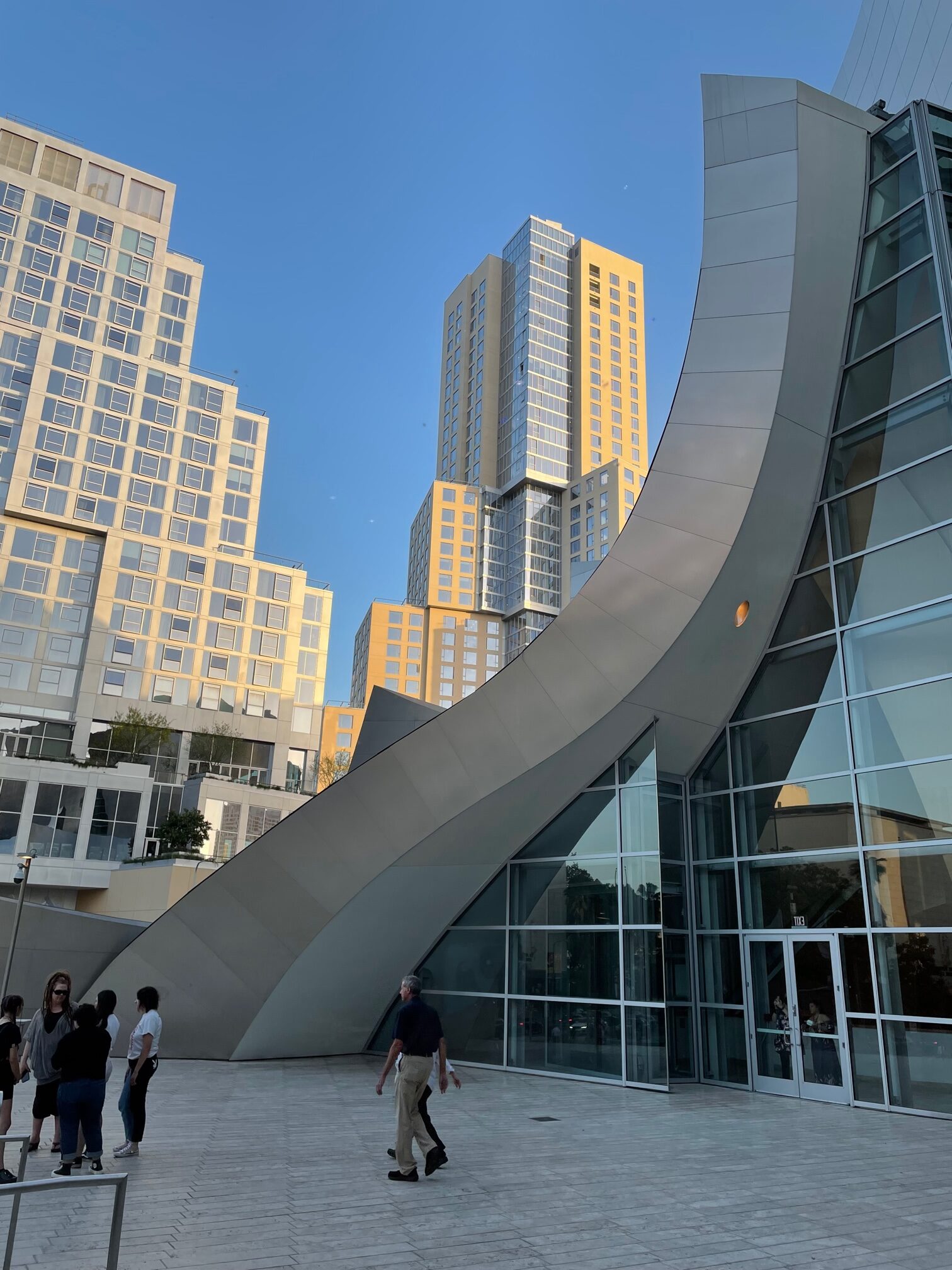