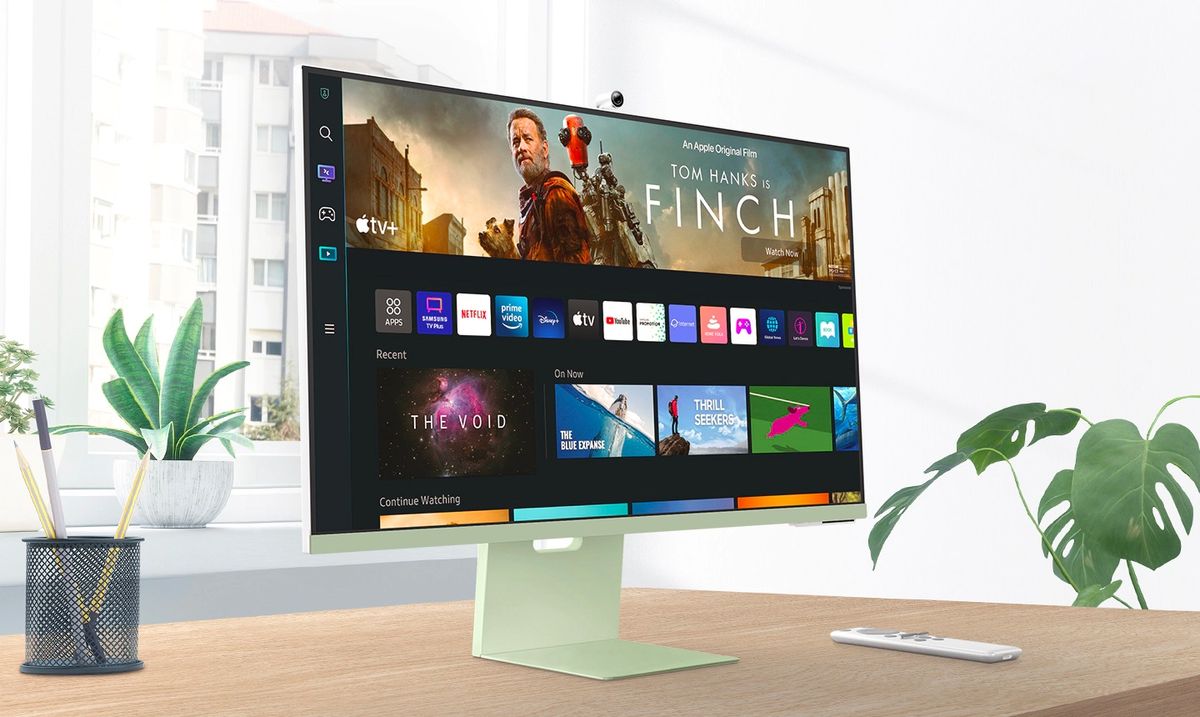 The Samsung Smart Monitor M8 is a 32-inch 4K monitor that manages to pack a webcam, speakers, and a few other features into its slim and sleek chassis. As the Smart Monitor moniker suggests, this display can run its own apps, and thanks to built-in Wi-Fi and Bluetooth support. it can talk to your phone and other smart devices in your home.

At a glance, you could be forgiven for mistaking this monitor for an Apple Studio Display, as the Smart Monitor M8 has an equally slim profile (11.4mm) with thin bezels around the screen. Both screens also offer a similar suite of built-in features, including a built-in processor-driven camera and speakers. But unlike Apple’s Studio Display, Samsung’s Smart Monitor M8 is available in your choice of four colors and HDR support. In addition, it costs about half as much.

Read on for a comprehensive review of the Samsung Smart Monitor M8, which packs enough promising features at such an affordable price that it’s vying to be one of the best monitors around.

The Samsung Smart Monitor M8 is now available for pre-order via Samsung’s website, with the promise that it will ship by April 25.

You can order an M8 Smart Monitor for a starting price of $699, though that only gets you the base model in white. To get one in color, it will cost you an extra $30, as the blue, green, or pink M8s are priced at $729.

Intentionally or not, Samsung designed the Smart Monitor M8 to look a bit like a bigger and better Apple Studio Display. The M8’s 32-inch 4K display is housed in a slim chassis with a flat back and a stand that looks like a large chunk of metal protruding underneath.

Above all, Samsung was keen to say that the Smart Monitor M8’s stand is height adjustable, allowing you to adjust it up or down by more than 4 inches. It might not sound huge, but for tall people like me (or anyone who values ​​an ergonomic workspace), it’s a very welcome feature. That’s especially welcome considering that Apple’s $1,599 Studio Display doesn’t come with a height-adjustable stand, unless you shell out an extra $400.

With the stand attached, the M8 should measure approximately 28.1 x 22.6 x 8 inches and weigh 14.8 pounds. The monitor packs in a number of features, including Wi-Fi 5.1 and Bluetooth 4.2 connectivity, along with 2.2-channel speakers and a high-sensitivity microphone.

One feature that’s not built in is the included SlimFit camera. Instead, it comes as a detachable webcam that you can magnetically attach to the monitor at will. There’s also a remote control included with the monitor, which might seem odd until you remember that it doubles as a smart display on which you can watch Netflix, Disney+, and all the best streaming services without need to hook it up to a PC.

The Smart Monitor M8 also supports HDR10+, which is actually Samsung’s spin on HDR (high dynamic range). That means you can view HDR content on this monitor, which you can’t on the Apple Studio Display as it doesn’t support the feature.

In terms of ports, you don’t have many options for hard-wiring things to the Smart Monitor M8, but it does have some useful USB-C features.

On the back of the M8 are a single micro-HDMI port and two USB-C ports, one of which supports pass-through charging up to 65W so you can charge a laptop while you’re using it to control the monitor.

According to Samsung, the Smart Monitor M8 sports a 2.2-channel speaker system consisting of a pair of 5W speakers and a tweeter built into the screen itself.

While I would generally caution against getting too excited about the sound quality of a monitor’s built-in speakers, the remarkably good performance of the Apple Studio Display’s built-in speakers reset my expectations. Perhaps the Smart Monitor M8 will deliver equally impressive performance once we get one to test and review.

The Smart Monitor M8 comes with a 1080p SlimFit camera, but it’s not integrated into the screen. Instead, it’s a separate camera that you can magnetically attach to the monitor when you want to use it.

The camera supports face tracking and autozoom functions (meaning it can theoretically identify and track speakers, at Apple’s center stage) and it also comes with a shutter physical privacy, which is a good idea.

Samsung’s Smart Monitor M8 has a built-in processor that runs Tizen, the company’s operating system for smart TVs, home appliances, and more. This allows it to work independently as a smart display, so even if you don’t connect it to a PC, you can download apps to it wirelessly and use them as you would on a Smart TV thanks to the microphone and speakers integrated.

Since this is Samsung we’re talking about, the monitor also supports the company’s SmartThings IoT protocol and doubles as a SmartThings hub that you can use to control ZigBee, Z-Wave and IP connected devices. .

Although it was first unveiled at CES 2022, Samsung’s Smart Monitor M8 is only now hitting the market – and frankly, the timing couldn’t be better.

What at first glance looked like a promising smart monitor now looks like a pretty serious Apple Studio Display competitor, as the M8 seems to offer more features than Apple’s latest monitor despite a much lower cost.

Sure. the proof is in the performance, so we’ll have to wait to test one for ourselves to say for sure if Samsung has quietly delivered a better smart monitor than Apple for half the price.

Dialpad Partners with MIA Distribution to Expand Reach in Australia