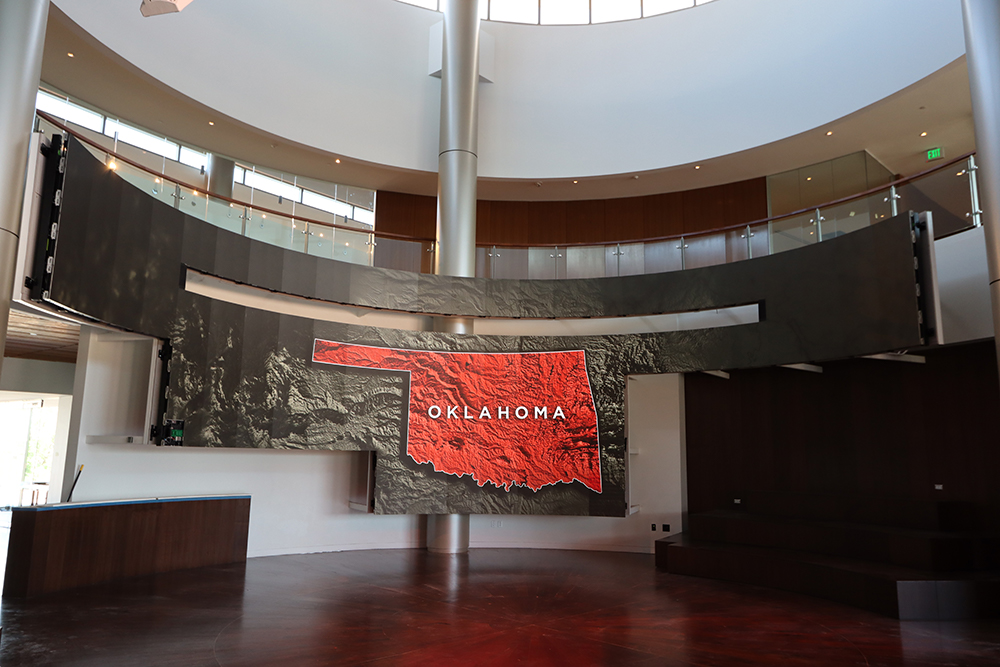 The First Americans Museum (FAM) in Oklahoma is the first of its kind as the only place in the United States where visitors can experience and learn about American history through the lens and collective stories of 39 tribal nations from the state.

To celebrate its launch in September 2021, the museum has planned an eventful week. Among them was a 45-minute fashion show that featured original content on the newly installed video wall, as well as performances by Oklahoma City Ballet and nationally known poets and speakers.

The challenge of the dvLED video wall

Controversial in construction and architecture, the museum has been in the planning stages for more than 20 years by the State of Oklahoma, the City of Oklahoma, and the tribal nations themselves.

The first discussions began in 2018 around the construction of a giant, suspended and curved dvLED video wall designed to wrap around the center of the museum. The goal was to create a gathering space for live music and performance that mimicked the center of a tribal village and allowed “the exchange of ideas”.

Computer design consultancy Waystone LLC was commissioned to bring the concept to life, designing a video wall solution that was not only technically feasible, but also pushed the boundaries in terms of creativity. As the central point of contact for the museum, Waystone LLC has hired an AV specialist, Ford Audio-Video Systems, LLC (Ford AV), to manage the AV portion of the project from start to finish.

Design consultancy began in 2019 in cooperation with the Absen team based on initial drawings of 192 Acclaim Series panels in a 6 degree concave design. Peerless-AV was contracted to design a custom fabricated mounting system that could accommodate the curvature of the wall and support the total video wall weight of 4,200 lbs.

“It was certainly not a simple rectangular video wall. The installation and engineering of the dvLED video wall was very difficult, but the Peerless-AV team were optimistic and convinced that they could do everything to make the system assembly is working properly,” said Courtney Myers, CEO of Waystone LLC. “By far the biggest concern was the curvature of the wall and the Peerless-AV team was instrumental in calculating the radius. the weight of the video wall were also a challenge; three layers of pleats were needed to create the curve that cantilevered 6 feet from the wall, giving the effect of floating in the air.

The solution by Peerless-AV and Ford AV

Peerless-AV was also selected based on its flexibility, cost effectiveness, innovative engineering capabilities and customer service – all aspects of SEAMLESS, Peerless-AV’s dvLED video wall integration program . The program ensures that the entire SEAMLESS dvLED Solutions team is available at every stage of the process. Thus, the company claims that it guarantees every customer quality support and service.

The Absen Acclaim 2.5 series is a 2.5mm pixel pitch dvLED solution that offers Full HD/4K image quality, true 16:9 aspect ratio, ease of maintenance and high brightness for indoor dvLED video wall applications, like this one. The slim design sits less than 10cm from the wall when mounted, and the size of the panels made it a flexible choice for the creativity and complexity of FAM installation.

From the moment the crews arrived on site, the process was meticulous, methodical and painstaking to calculate the necessary adjustment to the wall curvature required. The first step was to install a plywood support to create a secure base for the dvLED. From there, the team used a detailed CAD drawing, precise measurements and a curved model, making sure they took all the necessary measurements.

“The installation was a challenge from the start. A slight misstep in the curvature would shake the entire structure, so fit and placement had to be exact at every point,” a Ford AV spokesperson said. “Fortunately, Peerless-AV’s mounting system offers adjustability. The combined efforts of Ford AV and Peerless-AV helped make this installation such a success. »

The installation exceeded the museum’s expectations and the Peerless-AV team provided the most suitable mounting system for the unique dvLED video wall. To the engineers who carried out the project, the frame alone offered a certain magnificence and also underlined its immense presence.

Additionally, a custom finishing kit accessory from Peerless-AV has been added to the sides of the video wall to give it that clean, finished look and meet the visual expectations of museum visitors.

The resulting unique shape of the video wall is a visual delight, reflecting the character of FAM and the playfulness of its designer, Courtney Myers. The inner rectangle space is visualized to be used as a place to put text or have animated characters pop in and out, suitable for planned live performances in front of this giant “backdrop”.

Content shared at the museum is adapted for the video wall by internationally acclaimed New York-based media design firm, Batwin + Robin Productions. The smart editing software provided by the company allows for content flexibility and creativity. Not only does this software allow the museum to quickly change content, but the museum can also use sections of the video wall to display different content, maximizing audience engagement.

FAM Director/CEO James Pepper Henry comments, “The giant dvLED video wall is more than we expected! Since our opening, the Xchange Theatre, as it is now known, has become a popular venue for demonstrations, singing, storytelling and fashion shows. The dvLED video wall adds a truly special element to shows and performances with original and inspiring motion backgrounds, and also provides a way to thank our customers for their support in making FAM a reality.

To see photos of the project and the installation, click on “View slideshow” on the right.