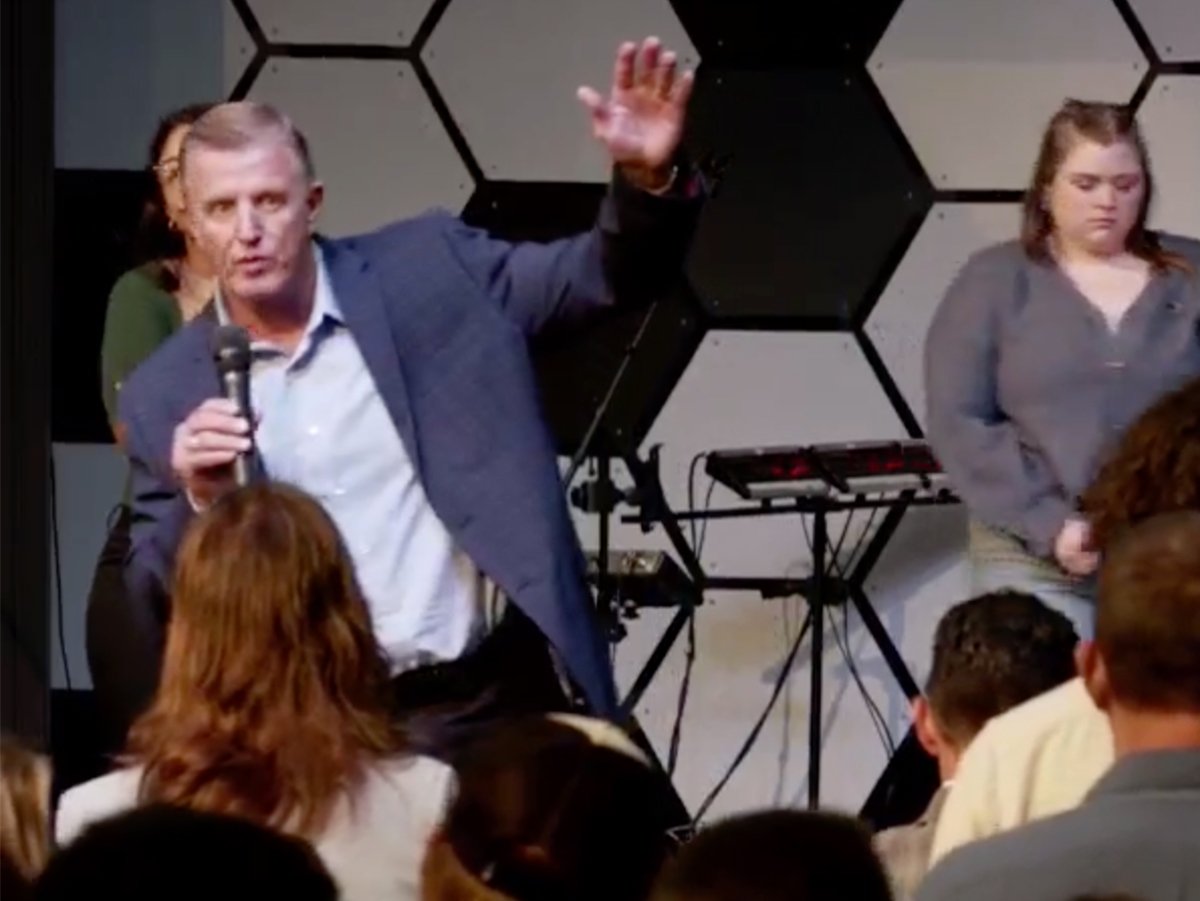 For abuse survivors like Jules Woodson, the Indiana pastor’s video is all too familiar

(RNS) – When Jules Woodson saw the viral video of an Indiana church applauding a pastor who had confessed to sexual misconduct, his heart sank.

It was a scene Woodson had experienced before.

In 2018, Woodson came forward to take on Andy Savage, her former youth pastor who forced her to perform a sex act when she was 17. After Savage left that youth pastor position, he went on to lead a megachurch in Memphis, Tennessee, and write books about marriage and family.

Woodson confronted Savage on social media about his past actions, leading him to admit his sexual misconduct at a church service. The congregation responded with applause.

A pastor confesses to “moral failure” and walks away from ministry while seeking God’s mercy and restoration. The church stands near the pastor. Survivors are asked to forgive and forget.

“They do the same shit,” Woodson said.

In the viral video, taken at New Life Christian Church & World Outreach, a nondenominational church in Warsaw, Indiana, Pastor John B. Lowe led the congregation in an altar call on Sunday, May 22, followed by what is called the “sinner’s prayer.”

Then he started confessing to adultery, which he says happened 20 years ago.

“I will not use the Bible to defend, protect, turn away my past sin. I have no defence,” he said. “I committed adultery. To put it plainly, I wasn’t wrong. I didn’t have an affair. I didn’t make an error in judgment. I sinned.

Lowe admitted in the video that he oversaw church discipline for church members guilty of “sexual failure” but did not confess to his own misconduct. He then said the church was involved in a “biblical process” to rebuild trust.

After his confession, the church members began to applaud.

Then a woman came on stage and berated the pastor and the congregation, saying that what he described as adultery began 27 years ago, not 20, and that she was 16 when the pastor l abused.

“You did things to my teenage body that never had and never should have been done,” she said, standing at the church pulpit. “If you cannot admit the truth, you must answer for it before God. You are not the victim here.

A victim of abuse speaks at New Life Christian Church & World Outreach, a non-denominational church in Warsaw, Indiana, on May 22, 2022. Video screenshot

After speaking, a man identified as her husband took the microphone and described how the couple were receiving help and working through “love and forgiveness”. He also held up a purity ring, saying his wife was wearing it at the time she was abused – then he dropped it on the floor.

“People need to be held accountable,” he said on the video. “They can’t just deceive people and say, ‘Well, I just committed adultery.’ It was way beyond adultery.

After the pair left the stage, Lowe returned and faced angry questions. He admitted the survivor was 16 when his misconduct began.

In a report post online, the church said Lowe had quit, following revelations at the end of the service. The church also said a church member recently came forward about Lowe’s misconduct – and church leaders learned about it and confronted him.

“The woman in question and her family came together and addressed the congregation, indicating that inappropriate sexual behavior first occurred when she was 16 and continued into her twenties. . She tearfully described living with the deep shame and pain in the years that followed.

RELATED: Jules Woodson to victims of abuse: “You are strong, you are brave and your voice matters”

Margo Stone, executive director of the Ministry Development Network, which helps denominations deal with pastoral misconduct, said independent churches like New Life often lack the skills or experience to deal with cases of abuse and misconduct. pastoral misconduct. These churches often do not understand the power dynamics involved between the pastor and the congregation.

“The pastor will always be seen as someone to be revered, especially if it is a very pastor-centric church,” she said. “What happens is that, as we have seen with Southern Baptists, victims tend to be left behind or blamed for taking the pastor away from his ministry.”

Churches tend to view pastoral misconduct as a sin, rather than an abuse of power, Stone said. So if a pastor confesses his sins, the church is inclined to forgiveness and is tempted to go ahead and find ways to bring the pastor back to leadership, rather than dealing with the evil that the actions of the pastor have caused.

Members of the congregation are also often too close to a pastor to properly address misconduct. The pastor is the person they hear preaching every Sunday, who visits them in the hospital, who marries them and buries them. Thus, it becomes difficult, Stone said, for church members to believe that their pastor has been abusive.

Churches can also be overconfident in their abilities to deal with abuse while rejecting the idea that they should turn to outsiders and experts for help. They often believe that the Bible gives them everything they need to know to deal with abuse and misconduct. This combination of overconfidence and lack of knowledge often leads churches to mismanage and neglect victims of abuse.

This dynamic has manifested itself in the Southern Baptist Convention, where the response to allegations of abuse has often been to say that dealing with abuse is up to the local church. To complicate matters, most congregations are very small — the median size of congregations in the United States is 65 people, according to the recent Faith Communities Today study — and run by volunteers.

These volunteers, Stone said, often want to find a way to save their pastor.

She said that in the Indiana case, if the woman’s account is accurate, then abuse has taken place. “Sexually assaulting a minor is not a business,” Stone said. “If she was 16 and he was the pastor, then that’s sexual abuse.”

According to the newsthe Kosciusko County District Attorney’s Office is investigating allegations of abuse at New Life Church.

Ellen Armour, a professor at Vanderbilt Divinity School, which teaches religion, gender and sexuality, said independent churches often lack the infrastructure to deal with abuse. More hierarchical churches, she said, have procedures in place to assist churches with allegations of abuse or pastoral misconduct.

“That doesn’t mean sexual misconduct by clergy doesn’t happen in these denominations. I’m sure it is,” she said. “But they have the infrastructure to handle it.”

In the event of abuse or misconduct, independent or self-governing churches could easily turn to the resources of other denominations or outside groups for help, Armor said. But they rarely do, which can often lead to mishandling of claims.

“The reason these more conservative churches don’t have the resources to adequately address clergy sex abuse isn’t that those resources don’t exist,” she said. “That’s because they didn’t seek them out – apparently preferring to sweep the problem under the rug, which only amplifies the harm done to the survivors.”

Armor also sees theology at play in cases like the New Life Church in Indiana. Members of more conservative churches, especially those that emphasize the so-called purity culture, can often blame abuse survivors for somehow misleading pastors. “They often blame women, like dressing inappropriately or acting inappropriately,” she said. 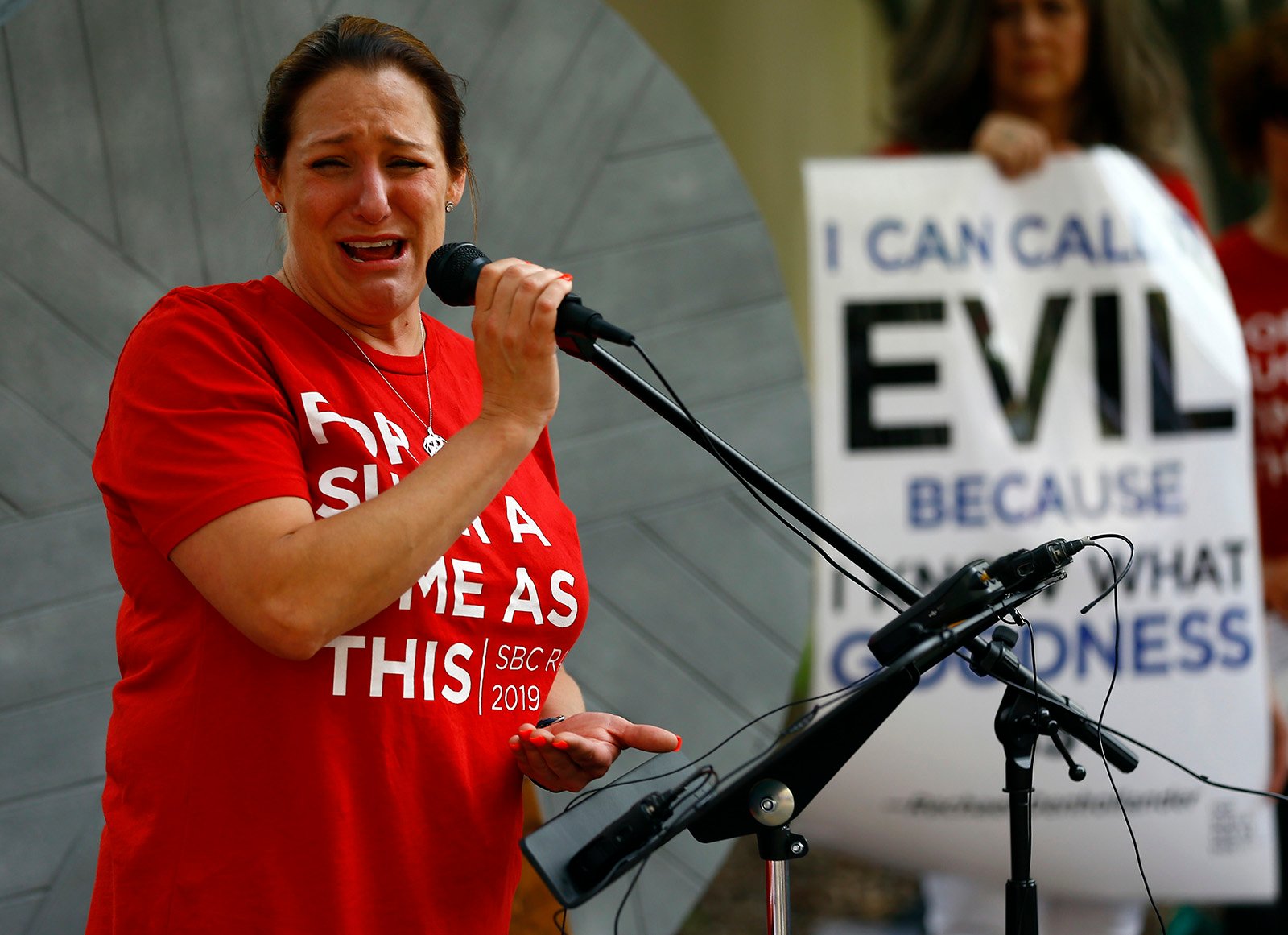 Jules Woodson of Colorado Springs gets emotional as she speaks about surviving abuse during a rally outside the annual meeting of the Southern Baptist Convention at the Birmingham-Jefferson Convention Complex, June 11, 2019, in Birmingham, Alabama. RNS photo by Butch Dill

Woodson said videos like the one from the Indiana church reveal a “toxic theology” that treats pastors as heroes and uses theatrical acts of confession and forgiveness to cover up pastoral faults. She said the video showed no signs that Lowe actually felt any repentance or responsibility.

“If you were repentant, you would go to jail,” she said.

She said those who rush to forgive leaders send a message that victims of abuse don’t matter. And churches often move on, leaving survivors alone to pick up the pieces of their lives.

“The trauma never goes away,” she said. “Healing is a process and it can get easier. But it doesn’t go away. »

Woodson said she started shaking watching the Indiana church video, half out of grief for what the survivor had been through, half out of the courage it took to stand up and face a pastor.

“She was so brave,” Woodson said. “I just wanted to wrap my arms around her.”