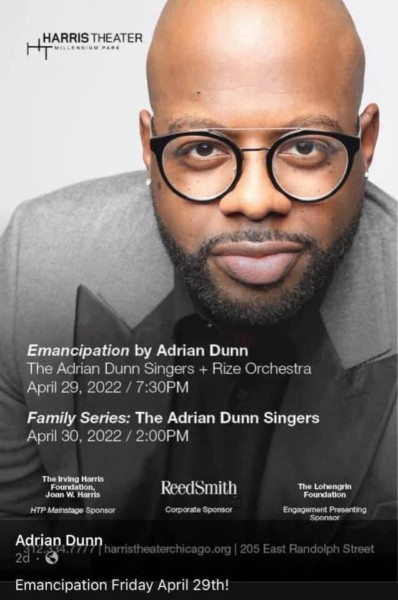 One of the really great things about being a critic is discovering “new to me” talent. Being in Chicago’s art scenes, it’s nearly impossible to see it all, hear it all, appreciate it all. With this in mind, the Harris Theater staged a world premiere, Adrian Dunn’s Emancipation, and I was intrigued. Teamed up with the Rize Orchestra and the Adrian Dunn Singers, Emancipation was a wonderful evening of live music with a pointed message. Messages in fact. More on that in a minute. Adrian Dunn himself is a conductor, composer, artist, singer and founder of the Rize Orchestra and the Adrian Dunn Singers. The Rize Orchestra was founded in 2019 to address the lack of diversity in the orchestral world. This Windy City-based troupe of musicians has made tremendous strides in establishing equality in the classical music genre in just a few short years. As for the Adrian Dunn Singers, they were 15 in total, sharing their remarkable talents on the front of the stage. Seven powerful women, all adorned in ethereal white dresses, and eight talented men, all dressed in tuxedos.

“How are you tonight, Harris Theater?” An enthusiastic Adrian Dunn inquired at the top of a show. A program absolutely filled to the brim with a varied musical collection; from spirituals to hip-hop. From classical to gospel. The net was deliberately wide, but with the unifying “unapologetically black-centric” message. Also sharing with the audience, we all had to “make history tonight” as the concert was filmed and recorded for an upcoming live album. Dunn said “I’m so glad you’re here tonight” and the feeling quickly turned out to be mutual. As for the name of the show, “Emancipation this is freedom” and Dunn humbly retorted “I stand on the shoulders of the ancestors” and “I hope something tonight helps you feel free.”

As for the music, it was a sumptuous blend of classical and contemporary. If “black people are the authors of American music,” Dunn was determined to give credit to anyone who deserved it and hadn’t had the opportunity to bask in it in their lifetime. Including Nina Simone, Biggie, Whitney Elizabeth Houston, Michael Jackson and Prince…in death they weren’t remembered for the geniuses they were. To pay homage to him, the songs “Battle of Jericho” and “Glory!” spoke about the importance of “the walls of your life must come down”. Including some very significant obstacles that Dunn also faced early in his own career. “When I started in classical music” I was told I had to keep “my Blackness checked at the door”. When asked “what does it mean to be black and free in 21st century?”, part of the answer is to stop limiting someone because of their race, gender and sexuality. to outspoken author James Baldwin as inspiration.”God sees you, little black boy,” Dunn proclaimed. “I see you and it’s better.”

The first set ended with a dynamic duo of soloists joining the Rize Orchestra on the spiritually fueled “My Soul’s Been Anchored” with Tierra Whetstone-Christian and “Ride On, Jesus of Justice” with Lynnesha Crump. Proving that no live performance goes without a hitch, an awkward and uncooperative microphone stand didn’t ruffle for about eight minutes. “We know help is on the way,” Dunn cooed as the choir waited for a few stagehands to quickly work their proverbial magic. Ah, being as cool and poised as Dunn under unscripted pressure.

If the first set of the show was an exploration of faith through music, after the intermission was something else entirely. “It’s the second half. It’s time to introduce yourself! Sharing ‘everyone deserves the right to dream’, I’m sure Dunn was talking more about himself than the audience members. “Did you dream anything lately. Go get it!” For a classical concert, the following thumbnail pushed both the envelopes and the buttons. Exclaiming “Black is essential” and “I love black women, don’t you?” a tribute to singers Billie Holiday & Nina Simone included the singles “Freedom”, “Black Boy Prayer”, and “Strange Fruit”. Exclaiming that it’s “ok to be different” by sharing poignant lyrics dedicated to the “ancestors who hung and hung from a tree”.

From professional inspiration to personal inspiration, now was the time for Dunn to look within. Pronouncing the importance of his faith in the development of his childhood, the following hymn was “dedicated to my papa, the head of the church and of my house”. “I Love the Lord” with Patrick Dailey and “Give Me Jesus” with LaQuentin Jenkins, were spectacular tributes indeed. As the voices rose, one dad couldn’t be more proud.

Before the show ended, Dunn became poetic. “It means the world you are in here. Can I say thank you? The closing songs “Mountains” and “Get Free” took the whole audience to church and beyond. If his goal was to create a time when black music should be respected, revered, appreciated, honored and cherished, Adrian Dunn Emancipation hit the proverbial ball out of the park. Inspiring and entertaining, Emancipation is the second in a trilogy of world premieres between Dunn and Company and the Harris Theatre. I look forward to seeing exactly what Adrian Dunn, Rize Orchestra and The Adrian Dunn Singers do for a now highly anticipated encore.

Adrian Dunn Emancipation performed at the Harris Theater on April 29, 2022.

Pieris Pharmaceuticals to Host Q1 2022 Investor Call and Provide Company Update on May 11, 2022