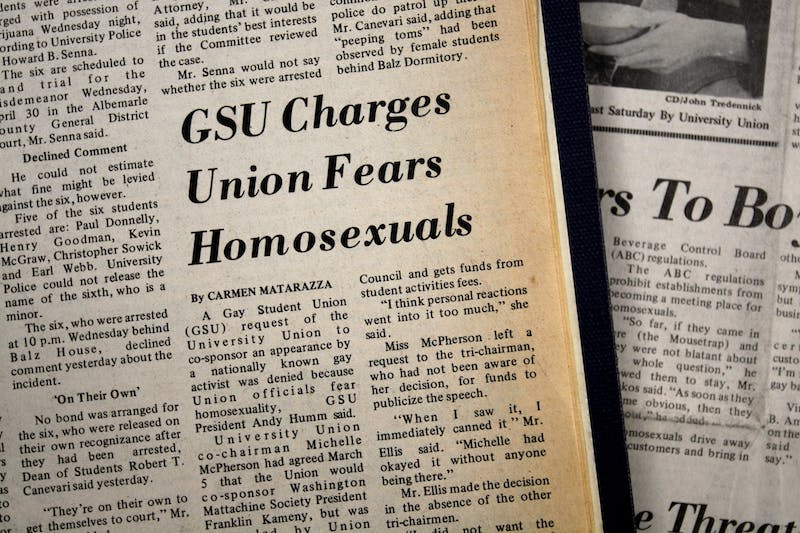 Board of Visitors appointee Bert Ellis rejected a request by the Gay Student Union for the University Union to co-sponsor an event headlined by pioneering gay rights activist Frank Kameny in 1975 cover of the Cavalier Daily archive broadcast.

The decision came just a month after Ellis and the Union were also at the center of controversial for arranging a debate with William Shockley, a prominent proponent of eugenics. Although the Black Student Alliance and the Student Council told Ellis and the Union to cancel the debate – titled “The Correlation Between Race and Intelligence” – the event took place in February 1975 during the first week of Black History Month.

Ellis did not respond to a request for comment.

No longer in existence today, the University Union was a group responsible for organizing concerts, speakers, debates, and other social opportunities for students during the semester. As three-time president and spokesperson, Ellis led the organization, along with two other three presidents.

In March 1975, the GSU had asked the university union to co-sponsor an appearance by Kameny. Fired from the U.S. Army Map Service because of his sexuality, Kameny appealed his dismissal, co-based the DC branch of the gay rights organization, the Mattachine Society, and dedicated the rest of his life to activism.

“Years before the gay rights movement existed in a widely recognized form and at a time when the open affirmation of homosexuality could invite physical harm, Mr. Kameny worked to increase the acceptance of gays and lesbians in mainstream American society and to gain recognition of their equality before the law,” a Washington Post obituary de Kameny after his death in 2011 reads.

GSU President Andy Humm said the group was not asking the Union for money to pay Kameny to speak. On the contrary, Humm thought it would be wise to seek co-sponsorship of the event by the Union in order to access publicity funding and increase publicity efforts.

Founded in 1972 at the University, the GSU was later renamed the Lesbian and Gay Student Union and is known today as the Queer Student Union. The group famous his 50th birthday last year.

Humm began his time at the University in 1971, just a year before the founding of GSU. In an interview with The Cavalier Daily, Humm said he was locked up when he arrived at college and was harassed – he recalled students tearing down posters advertising GSU events and an incident in which an individual defaced his driveway with phallic graffiti.

It wasn’t until his fourth year that Humm ran for president of the GSU, which he called “a life-changing experience.” Humm was looking forward to Kameny speaking at an event – Kameny was a leading activist in the 1970s, a decade that saw transformative events that transformed the gay liberation movement, such as the Stonewall riots.

According to an article dated March 21, 1975, Union tri-president Michelle McPherson had agreed that the Union would sponsor the event, but was overruled by Ellis two days later.

“When I saw it, I immediately canned it,” Ellis said in an interview for the article. “I didn’t want the university union to be associated with the GSU.”

Ellis added that he made the decision in the absence of the other three presidents.

McPherson said ‘there was no logical reason’ for the union not to sponsor the event, adding that she felt ‘personal reactions’ went into the decision to withdraw sponsorship of the event.

Ultimately, Humm said he thinks Ellis’ opposition to the Kameny event highlights hypocrisy about free speech. Although Humm said he thought the Union would be willing to co-sponsor the event in the spirit of hearing from all sides, that was not the case.

“The spirit of the day was, ‘Okay, we’re going to hear everyone,'” Humm said. “But of course Bert Ellis didn’t want anyone to hear Frank Kameny. That’s his hypocrisy.

Today, free speech is one of Ellis’ top priorities as president of the conservative alumni group, the Jefferson Council. The group’s other priorities include revitalizing the honor system, maintaining the Lawn’s appearance as a UNESCO World Heritage Site, and preserving the legacy of Thomas Jefferson.

His appointment to the Council by Governor Glenn Youngkin was met repel of the Student Council, which alleged that Ellis “selectively exploits free speech discourse” in a statement to the Board of Trustees.

“He uses phrases like ‘freedom of speech’ and things like that, but he doesn’t believe it,” Humm said. “He never did.”

Shaq is committed to promoting indigenous voice, but has he trivialized a serious issue?