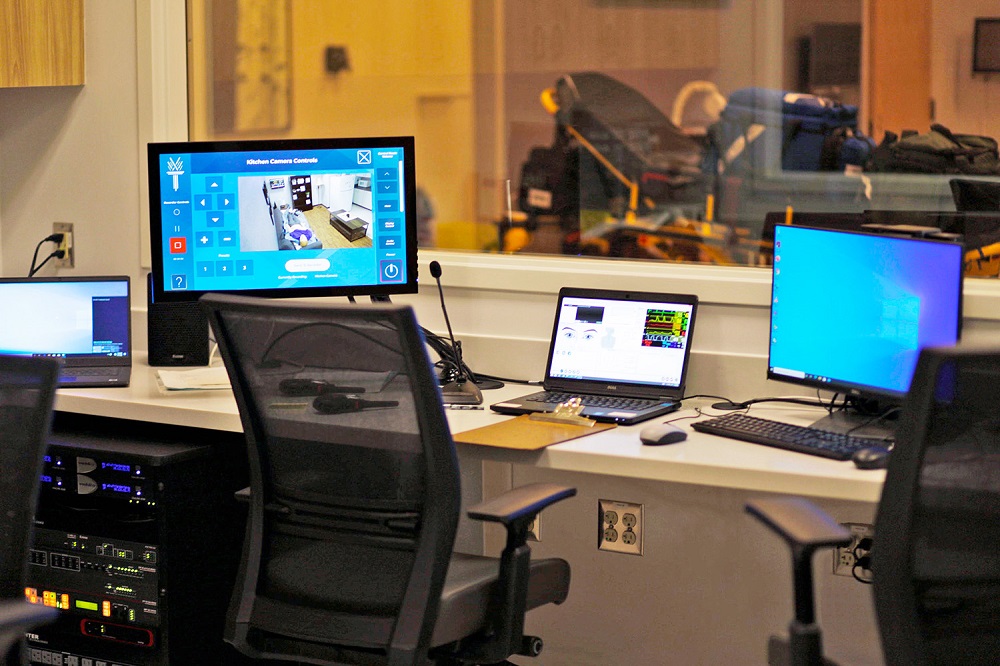 The Health Sciences Building features an emergency medical services simulation suite set up as an apartment containing a kitchen, living room, bedroom and bathroom equipped with high-fidelity medical manikins that instructors control from a adjacent control. Instructors set up emergency scenarios, then monitor, guide and critique the actions of EMT and paramedic students through a direct observation window and via live and recorded video and audio feeds from multiple cameras. Additionally, video and audio of simulation sessions are recorded and streamed for viewing during debriefing sessions and for real-time peer assessments by students and instructors in remote classrooms. .

Much of the simulation room budget was spent on building the room and acquiring the patient simulation system. The state-of-the-art patient simulation system includes several anatomically correct adult, infant and obstetrical mannequins remotely controlled by software capable of presenting a wide range of clinical symptoms and vital signs in a variety of programmable scenarios. The AV system is as important as the simulation system as it records and broadcasts the video and audio events of the training sessions for debriefings and real-time observation by instructors and students. With the limited budget allocated to the suite’s audio-visual system, the designers intended not to over-design it. Yet they also focused on assembling an audio-visual system robust enough to support the important mission of preparing future rescuers for their jobs, while keeping operation simple so as not to distract from training. Extron provided the project’s AV switching, distribution, control and audio products.

To capture all the activity during training exercises, each of the four “rooms” in the simulation room is equipped with a PTZ camera on the wall and a beam-tracking hanging microphone on the ceiling. An Extron DXP 84 HD 4K PLUS matrix switcher carries the HDMI video from the cameras. The simulation room mics, along with the instructor control room mic, feed a digital audio distribution system that performs routing as well as digital signal processing for acoustic beam steering and cancellation acoustic echo.

SMP 352 recordings are played back for debriefings to help students and instructors assess student performance. The recordings are saved in the internal memory and on USB keys. Students can take the USB sticks with them to revise independently or to show others.

For added realism, only the student EMT team that would be present for an actual rescue are usually in a simulation room caring for a “patient”. But SMP 352 streaming outputs can be sent over the network to overflow classrooms, or even over the Internet via a software codec such as Zoom, allowing larger groups of students to observe in real time or review Recordings.

The simulation suite’s AV system is equipped with six 55″ flat screens to give observers an overview of the activity around each “patient”. One of these screens is located in the complementary classroom. The others are mounted above the dummy location in each simulation room. For example, in the living room, the display is above the foot of the sofa where the “patient” is lying on his back. In the bedroom, there are two 55″ screens – one above a bed, where an adult mannequin rests, and the other above a crib containing a baby mannequin.

All six screens display the same PTZ camera feed, as selected in the control room. The switcher routes the HDMI video output from the selected PTZ camera to a DTP HD DA8 4K 230 distribution amplifier that extends the signal over long distances via DTP shielded twisted pair cables to all six displays. Behind each screen is a DTP HDMI 4K 230 Rx receiver that converts the DTP signal to HDMI.

To accompany the video broadcast on the 55″ screens, the sounds picked up by the ceiling microphones in the simulation rooms are routed through the audio system to the ceiling speakers in the simulation rooms. The AV control processor ensures that the sound heard through the speakers comes from the same room displayed on the displays by controlling the audio routing to select the mic feed from the same room as the currently selected PTZ camera. The sound of the selected microphone is also heard in the control room through a pair of SM 3 loudspeakers which are driven by the stereo outputs of an MPA 152 Plus amplifier which receives its input from the audio DSP.

From the control room, instructors and their assistants can control the AV system and run simulation scenarios from a single operator station. As seen in the images, a laptop on the desk directly in front of the instructor is running simulation software from Laerdal Medical Corporation, makers of the medical manikins. This software can run pre-programmed simulation scenarios, or the instructor can operate the manikins on the fly. Physiological parameters are defined, trends initiated and actions recorded. Laerdal software provides “patient” vital signs to computer screens in the simulation rooms.

A 24″ touch screen at the instructor’s desk in the control room is used to control the AV system. The Wake Tech AV team designed the AV control GUI and the Inter Technologies installation team configured the control system using Global Configurator Professional. An IPCP Pro 350 control processor controls all AV system components through a network switch. The touchscreen AV control user interface on the 24″ monitor is implemented via a TLI PRO 101 TouchLink interface unit, allowing live HDMI video from the simulator room PTZ cameras to be displayed in the GUI AV control.

Jennifer Unitis, Academic Computing Manager, notes that since the start of her AV career, she has been involved with AV installations, whether creating designs, climbing ladders to run cables, or to mount equipment. Being so close to the hardware, she realized early on the capabilities, ease of installation and use, and reliability of Extron AV products. This has made Unitis an enthusiastic advocate for Extron wherever she has worked. Along the way, she and her associates trained at Extron and earned several certifications in Extron AV technology. When Unitis took up her current role at Wake Tech, she noted, “I was delighted to learn that the school is almost 100% Extron campus and that everyone on the AV team owns one or more Extron certifications.

Unitis confirms the sentiments of its AV team: “Extron has been extremely helpful in assisting with the design of the EMS simulation suite. They helped us create a solution that met all of our goals. We have built a high-end simulation environment for a fraction of the normal cost of a system with so many capabilities. Teachers and students find the system easy to use and are fully satisfied. The simulation suite plays a vital role in helping Wake Tech fulfill its EMS program mission of “Serving the State of North Carolina as a leader in education for the profession of emergency medicine.”