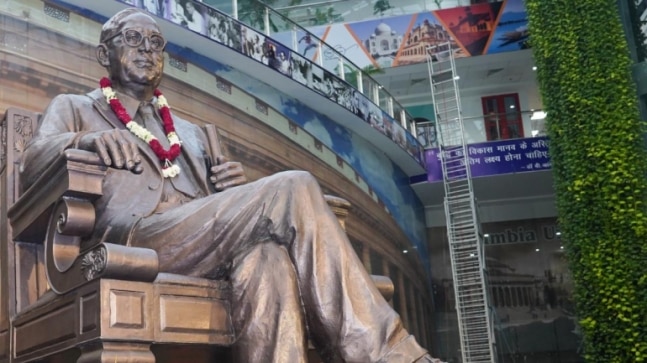 Every year, the nation observes November 26 as Constitution Day to commemorate the adoption of the Constitution by the Constituent Assembly in 1949. To mark the occasion, several programs have been held in Parliament and Vigyan Bhawan. Prime Minister Narendra Modi and President Ram Nath Kovind are expected to attend the event.

Prime Minister Modi extended his best wishes to the citizens while sharing part of the speech Dr Ambedkar delivered to the Constituent Assembly on November 4, 1948, “in which he presented a motion for the adoption of the draft Constitution as decided by the drafting committee “.

Best wishes to our citizens on Constitution Day.

On this special day, sharing part of Dr Ambedkar’s speech
to the Constituent Assembly on November 4, 1948 in which he presented a motion for the adoption of the draft Constitution as decided by the Drafting Committee. pic.twitter.com/pviZNrKsGd

India’s Vice President Venkiah Naidu also tweeted, saying: “… as a nation we are eternally indebted to Dr BR Ambedkar and our founding fathers for crafting the visionary Constitution that is based on the ideals of inclusive justice, freedom and equality. “

Minister of Law Kiren Rijiju, who recently launched an online course on the Indian Constitution, tweeted: “Since 2015, under the leadership of Prime Minister Narendra Modi ji, we have started celebrating November 26 as Constitution Day. To honor the authors of our constitution and reiterate our commitment to building an India that would make very proud. Happy Samvidhan Divas to my fellow citizens. “

Since 2015, under the leadership of PM Sh @Narendra Modi ji we started celebrating on november 26th as #Constitution Day. To honor the creators of our constitution and reiterate our commitment to building an India that would make them very proud. Happy #SamvidhanDivas to my fellow citizens. pic.twitter.com/DU5jjHxpqT

Rajasthan Chief Minister Ashok Gehlot tweeted: “On Constitution Day, my humble tributes to Dr BR Ambedkar, who chaired the editorial board of the Constituent Assembly and all the members. Reaffirm our commitment to democratic ideals, the values ​​enshrined in the constitution and renew our commitment to preserve and protect them. “

“The best constitution in the world! Equality, fraternity, justice, freedom and development of the poor. Greetings to MahaManav, BharatRatna Dr Babasaheb Ambedkar who made India the mother of democracy! Greetings to all on Constitution Day! Maharashtra opposition leader Devendra Fadnavis tweeted.

Meanwhile, Congress shared a video of Indian Prime Minister Jawaharlal Nehru delivering a speech on the Indian Constitution. The party captioned the video: “The Constitution must not be the plaything of inconstant thought or inconstant fortune.”

We must not make the constitution the toy of inconstant thought or inconstant fortune.
– Jawaharlal Nehru#Constitution Day pic.twitter.com/zPxIsVZjcS

Observation of Constitution Day began in 2015, based on the prime minister’s vision to properly recognize the significance of this historic date, the Prime Minister’s Office (PMO) said in a statement.

As part of the Constitution Day celebrations this year, Prime Minister Modi will participate in programs organized in the central hall of Parliament and at Vigyan Bhawan on November 26, his office announced on Wednesday.

The government has also planned an online quiz on constitutional democracy. “Participate … and get certificates,” GDP said in a tweet.

Within the framework of #AzadiKaAmritMahotsav, India celebrates Constitution Day on November 26

Take the online constitutional democracy quiz and get certificates

November 26, which was previously celebrated as Law Day, marks the day India adopted its Constitution in 1949, more than two years after gaining independence from British rule. The Constitution came into effect the next year on January 26, 1950, to commemorate the promise of Purna Swaraj, adopted at the Lahore session of Congress that day in 1930.

How NeuralSpace helps developers build language AI models in Oriya, German, and many…