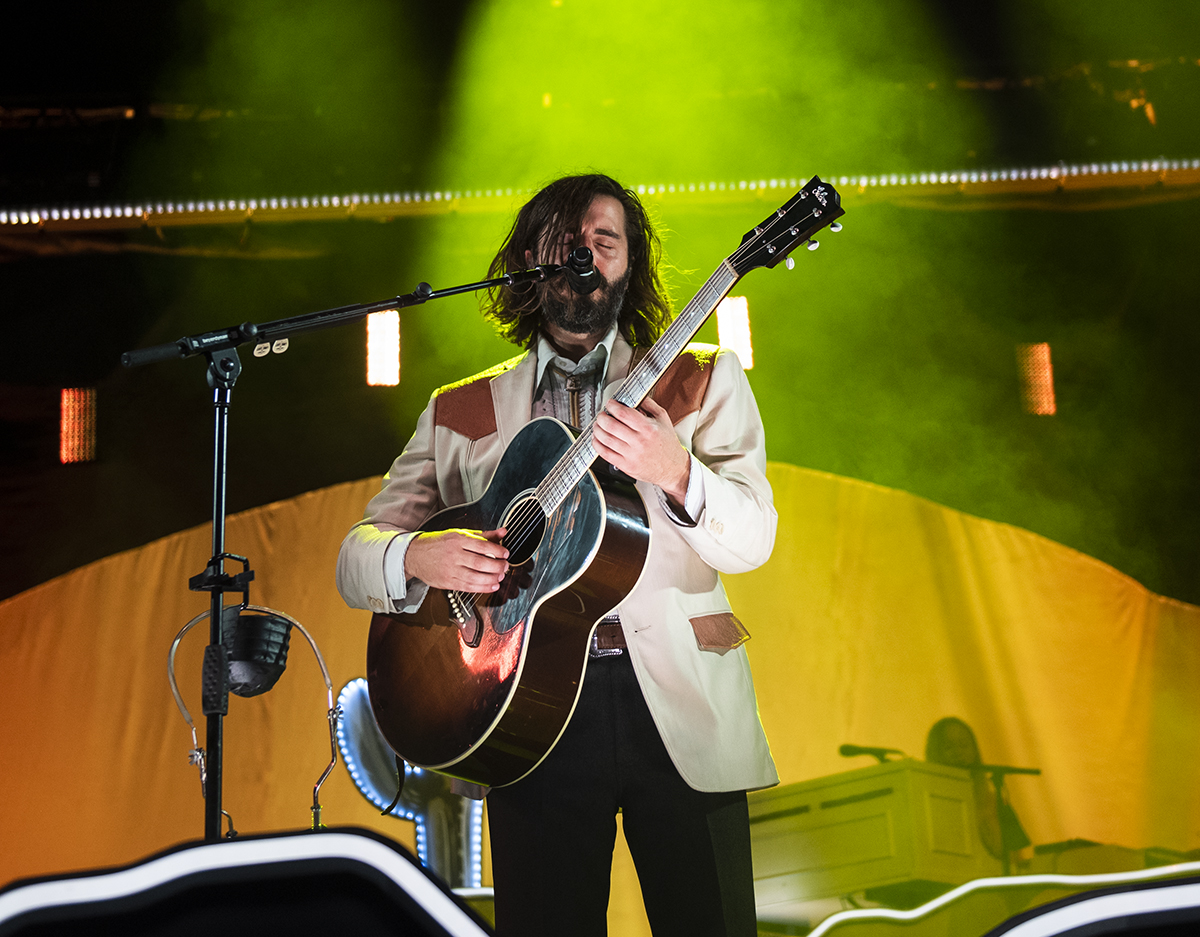 In the indie rock band’s performance Thursday night, Hollywood Forever Cemetery was greeted with constant references to those who slept beneath its grounds. But for those listening on the grass, the concert was anything but a lullaby. Led by frontman Ben Schneider, the Los Angeles-based band transformed their repertoire of heart-filling serenades into an eclectic mix full of life.

With a covered stage and a shy but tender opener Andy Shauf, the night began quietly. The black tarps around the edge and back of the stage were later uncovered, however, to reveal a desert landscape as Lord Huron’s performance drew closer. Complete with rolling hills and cacti, the monochrome gray set looked less like a base for stunning visuals than a bland gray. camouflage.

But at the start of the show, light began to seep in as the large semicircle, spanning the entire width of the stage, was backlit with a soft white and orange light. The public’s thirst for visual stimulation continued with Schneider’s opening, illuminated by two simple cones of white light. Yet as he ended “The Moon Doesn’t Mind” with a delicate bloom, the beams rose and went out to embrace the crowd.

The playful lighting continued as the scene suddenly bloomed into a radiant pink as “Mine Forever” began with a swerve. The brilliant arch, now clearly serving as the ensemble’s sun, flashed in pink tones and remained a focal point throughout the concert. Each of the first the songs started out the same – with the previous track decreasing in volume and brightness just to start over with sudden bass and colorful flashing lights – but the abuse of this maneuver seemed cheap and audiences were forced to wait for the variety.

After the initial quick succession, Schneider paused to greet the crowd, apologizing for the lack of conversation due to the venue’s curfew. The four-member group – joined by two other musicians – then proceeded to their rapid-fire setlist, covering a dizzying array of songs across their entire discography with only a slight emphasis on their most recent album “Long Lost”.

More diverse than the selection of songs were the instruments used to accomplish their live performances. The three guitarists, including Schneider and his harmonica, quickly put together a seemingly endless supply of guitars, both acoustic and electric, while bassist Miguel Briseño skillfully alternated between bass guitar and double bass.

The dynamic performance extended to Schneider’s mobility, as he shook his mane, quivered with pent-up emotion, and illustrated the lyrics with the occasional free hand. A smooth transition in “Wait by the River”, however, required the loss of his guitar, as Schneider cranked the microphone up and down on the three built levels of the hills. He matched the pleading ballad with a serious bounce and hands caressing the air, navigating the stage with silent bravado. The cacti lit up at his touch and the end of the song found him leaning confidently against the highest mountain.

While occasional references to death dot the tracks, the first outright mention of the morbid location came squarely in the middle of their set. Revealing the group’s dedication to generating a personalized performance to engage the crowd, Schneider mentioned the possibility of other supernatural companions, wondering, “Is anyone scared? Sometimes these assholes come out of the ground and scare you.

The ghost’s cry was immediately followed by a stunning shower of white light in “Love Me Like You Used To,” which contained no mention of the afterlife. But over time, Lord Huron’s frequent Western theme fitted into the venue perfectly, as Schneider donned a skeleton mask against a backdrop of rattlesnakes.

Hauntingly realistic, the skull’s overlapping jaws moved in tandem with Schneider’s song as the intensity of the concert peaked. The stage was incredibly electrified with utter sound and visual chaos as each color of the rainbow strobed, the dance moves frantically loose. and each musician jammed furiously.

A quiet plateau followed, and the band apparently closed with carefully curated “Where Did The Time Go”. Solemn and thoughtful, the song concludes a powerful a soundtrack suited to the venue and arranged in harmony with the desert setting, as Schneider referred to “What Do It Mean”, stating “Can you live until you die”.

The night should have ended there, but the band performed with “Not Dead Yet”, matching the macabre theme of the previous track but not its time frame. And with a disappointing encore, the gig dragged on and didn’t reach the previous emotional highs. A sober take on “The Night We Met” was the only star, with drummer Mark Barry continuing his tenure as a hidden gem – at one point shaking two maracas with one hand and drumming with the other, all while a washboard hung from his neck.

And while their over-ambitious recall may have killed the mood, Lord Huron is all but lost.