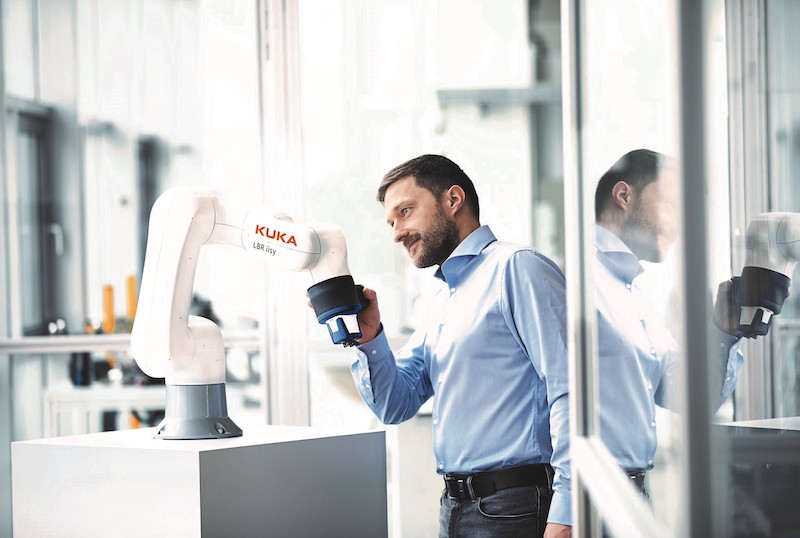 Cobots and no code: robotics for everyone

Almost three months before the launch of automatica, which will take place from June 21 to 24 at the Munich exhibition center, one thing is certain: never has the offer of collaborative robots been as wide as this year. And they’re easier to use than ever.

The latter also applies to industrial robots. Here, the no-code robotics allows an almost playful manipulation of the robots.

These developments and many others pursue one objective: the democratization of robotics. In the future, anyone should be able to operate robots without special knowledge. With cobots, this is already possible thanks to simple programming options.

The seamless integration and operation of these devices are also important reasons for their popularity.

The market for this species is currently growing rapidly. Industry leader Universal Robots says it already has more than 50,000 cobots in use in all sorts of applications.

Kim Povlsen, managing director of the Danish company, estimated the potential for cobots at around nine million units in an interview with the Handelsblatt, and sees the industry on the road to billions in sales.

Cobot is not just a cobot

It is therefore not surprising that many manufacturers are discovering their love for the cobot. While some qualify their standard robots for direct human-robot interaction by integrating many safety features, others rely on the development of special lightweight robots.

In Munich, automatica visitors can see for themselves the advantages and disadvantages of the two different worlds. However, the hype is clearly with lightweight cobots. Here, the competition between established builders and start-ups is creating unprecedented momentum.

Fanuc presents three new cobot models which are characterized by their low weight and intuitive drag-and-drop programming and should therefore also be of particular interest to novice users.

In order to meet the growing demand, Fanuc does not only want to increase its production capacities. Shinichi Tanzawa, CEO of Fanuc Europe, has another goal: “We want to become the undisputed market leader in cobots in Europe.

What market mates think of the idea remains to be seen. In any case, Kuka bets totally on innovation and presents the LBR iisy, a cobot which, thanks to a completely new operating system, is also destined to set standards in terms of operation. Install it, turn it on, get started – that’s what Kuka promises.

ABB makes a similar promise. The new families of GoFa and SWIFTI cobots should also be particularly easy to use and be characterized by high payloads and speeds. “Our new portfolio of cobots is the most diverse on the market,” said Sami Atiya, head of ABB’s Robotics & Factory Automation business.

And Yaskawa? The Japanese present their HC DTP Cobot series at the automatica under the slogan Easy – Smart – No protective barrier. With the new Yaskawa ecosystem, the manufacturer offers a variety of proven partner and in-house plug & play products with which the customer can configure his cobot cell in a modular way.

Newcomers and many start-ups

Anyone who thinks that only big industrial robot manufacturers can build cobots will learn otherwise from automatica. The number of new manufacturers, young or non-industrial, is increasing exponentially and with it the ideas for a wide variety of cobot variants for all possible applications.

For example, igus, previously mainly known as a manufacturer of energy chains, presents the plastic cobot ReBeL at an attractive price, which, with a weight of around ten kilograms, reduces entry barriers to a minimum.

This means that the machine will be used in particular for simple applications where robotics had previously not been worthwhile.

Neura Robotics, among others, operates at the other end of the spectrum. With the cobots Lara and Maira, the Swabians present highly accomplished production assistants with a sleek design, voice recognition and outstanding performance.

Between low cost and high end, manufacturers from all over the world including Comau, Denso, Doosan, Franka Emika, Kassow, Omron, Rethink, Stäubli, Techman and many other cobot solutions for all kinds of applications will be present.

Don’t forget: Agile Robots, Germany’s top-rated robotics start-up, is also exhibiting at automatica. The latest developments of this company are not only eagerly awaited by large investors.

No Code: barrier-free entry into robotics

The programming of classic industrial robots is also about to experience a small revolution. Wherever the applications allow it, new methods will in the future replace traditional high-level language programming.

It’s not just about giving newcomers a barrier-free introduction to robotics. In fact, no-code robotics can reduce the programming time of many applications by a factor of 70, believe it or not.

At least that’s what the young company Wandelbots promises. With its pen programming, the Dresden start-up is turning the world of programming upside down.

For example, if a welding path needs to be programmed, the user simply traces it with the so-called TracePen. Anyone can do it and it’s incredibly fast. It also saves costly programming time. An extraordinary innovation that the public of automatica discovers.

Like many other robot manufacturers in Munich, Epson also presents a no-code programming environment for beginners in robotics with little or no specialist knowledge. This allows four-axis robots from the manufacturer to be used quickly and easily.

A Horst for all cases

Fruitcore Robotics also takes an interesting approach to tailoring robot programming exactly to the skill set of the user.

The automatica exhibitions prove it: people are finally at the center of the developments. And the current level of development suggests robots will be as easy to use as a smartphone in the near future.