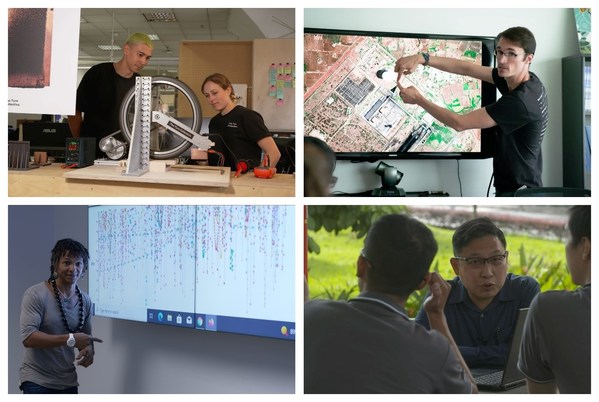 HONG KONG, July 27, 2022 /PRNewswire/ — During the third season premiere of “Tech for Good,” CNN anchor and correspondent Kristie Lu Stout learn about the invisible sources of pollution in our world, such as space debris, tire particles, greenhouse gas emissions and noise, and meet the innovators working to stem the tide of pollution to ensure a cleaner future – not just here on Earth, but beyond.

According to the United Nations Environment Program, long-term exposure to noise pollution can harm human health. With our cities getting louder and louder, it’s more important than ever to quell this unseen danger. In Singapore, Gan Woon Sengprofessor of audio engineering at Nanyang Technological University, focuses on the development of technologies capable of mitigating urban noise. Gan has developed a device that can be mounted on windows and emit sound waves to cancel out offensive noises from outside. He and his team are also working on another noise reduction technology using a technique called “intentional masking,” where positive natural sound is played to distract from negative noise.

CNN also hears Moriba Jahassociate professor of aerospace engineering mechanics at the University University of Texas at Austin, whose mission is to clean up space debris left behind by inactive satellites. With nowhere to go, this space junk continues to circle our planet at high speed, creating a potentially dangerous situation as an increasing number of new satellites continue to be launched. To address this space congestion, Jah built ASTRIACharta program that tracks man-made objects in Earth orbit and feeds their locations into a database, allowing users to see what current traffic patterns are.

Lu Stout meet then Gavin McCormick, an environmental activist and entrepreneur who turns to technology to get a clearer picture of pollution levels on Earth. McCormick co-founded the global company Climate TRACE coalition, which uses artificial intelligence and satellite imagery to track carbon pollution in real time. McCormick calls the Climate TRACE inventory a kind of Wikipedia for pollution data, which can be used and accessed by policymakers, regulators and the general public to provide real-time transparency on emissions data.

Finally, tire dust – made up of fragments released by vehicles as they travel – is the second most important microplastic pollutant in our oceans after single-use plastics. The tire collective is a British start-up whose mission is to clean up this invisible pollutant. The collective has developed an award-winning car-mounted device that hangs from the steering knuckle of each wheel, where electrostatically charged copper plates collect tire dust. According to the company, dust itself accounts for more than half of all particulate emissions created by vehicles on the road, which are then released into the air and waterways. Electric vehicles, which are heavier than gasoline-powered cars due to their batteries, make this an even more pressing issue.

Images of technology for good: https://bit.ly/3OthnFD

Airtime for the 30-minute special:

CNN’s portfolio of news and information services is available in seven different languages ​​across all major television, digital and mobile platforms, reaching more than 475 million homes worldwide. CNN International is the number one international television news channel according to all major media surveys across Europethe Middle East and Africathe Asia Pacific region, and Latin America and has a US presence that includes CNNgo. CNN Digital is a leading network for online news, mobile news and social media. CNN is at the forefront of digital innovation and continues to invest heavily in expanding its global digital footprint, with a suite of award-winning digital properties and a range of strategic content partnerships, marketed through a solid understanding of behaviors audience based on data. CNN has won many prestigious awards around the world for its journalism. Approximately 1,000 hours of long-form series, documentaries and specials are produced each year by CNNI’s non-news programming division. CNN has 36 newsrooms and more than 1,100 affiliates worldwide through CNN Newsource. CNN International is a Warner Bros. company. Discovery.