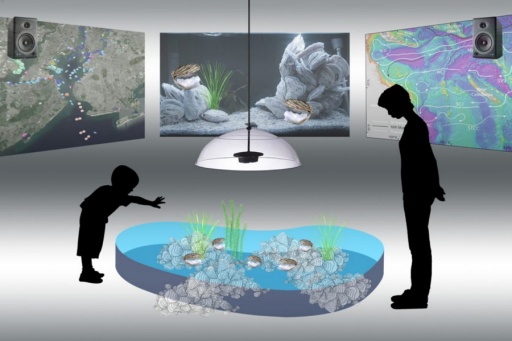 Art and engineering team up to tackle oyster problems for new exhibit – UBNow: News and Views for UB Faculty and Staff

Can an oyster listen? What kind of sound environment is needed for oysters to thrive? These are the kinds of questions that UB faculty member Stephanie Rothenberg explores in a new art exhibit.

Rothenberg and his collaborator, sound artist and researcher Suzanne Thorpe, received a 2022 Harvestworks Digital Media Arts Center residency to create an immersive piece of media art. “We’re partnering with the Billion Oyster Project, a New York-based nonprofit that works to ecologically restore the city’s waterways through oyster reseeding/repopulation initiatives,” says Rothenberg, professor and president. from the Art Department of the College of Arts and Sciences.

The project Rothenberg and Thorpe are working on, “Tending Ostreidae: Serenades for Settling,” is an interdisciplinary project exploring how anthropogenic noise in New York’s busy waterways impacts marine organisms, especially oysters. Since oyster reefs provide habitat for hundreds of species, prevent erosion along coastlines, and can filter approximately 30 to 50 gallons of water each day, restoring oysters in New York Harbor is a priority.

According to a Thrillist article, New York Harbor and its surrounding waters were once home to around 350 square miles of oyster reefs. But in the early 1900s, between overexploitation and 600 million gallons of untreated sewage dumped into New York waters every day, the oyster population declined so much that by 1927 the last oyster fishery of the city was closed. However, through pieces of legislation like the Clean Water Act of 1972, water quality began to improve enough that by 2000 oysters and other life had survived in New Harbor. York. In 2010, for the first time in a century, whales returned to port, and in 2014 the Billion Oyster Project was established with the goal of restoring 1 billion oysters to the port by 2035.

As part of their collaboration with the Billion Oyster project, Rothenberg and Thorpe are collecting underwater sounds in the harbor at locations where oysters are farmed. Underwater microphones, called hydrophones, collect audio, which will be used in a multimedia installation to trigger sound-sensitive robotic oysters that simulate the way oysters listen and challenge what constitutes safe havens for humans and other species.

As a vital member of our ecosystem, Rothenberg says the oyster can identify suitable settlement habitats by differentiating sound signatures in underwater soundscapes. The project is based on soundscape studies that investigate other ways in which knowledge is received and produced through a ‘listening body’. Drawing on data derived from port movements and local underwater sounds, the project interrogates the dynamic relationships between human activity and oyster well-being. According to Rothenberg, the project will express thematic content through immersive sound composition and a sculpted visual environment, and through virtual and in-person means – depending on exhibition and performance opportunities.

“Through the simulated sense of this sonically navigating being and participatory, responsive engagement mechanisms, we will animate questions, such as how do we listen to safe harbors and what do they sound like; how do we tend towards the more than human world, and how does it tend towards us? And can the listening oyster guide us towards a policy of mutual tenderness?

Rothenberg and Thorpe develop the work during artist residency and through collaborations with UB’s Department of Art and School of Engineering and Applied Science. The design of the immersive installation is inspired by children’s science sensory water tables in the natural architecture of a tidal pool.

“The exhibit will feature an organic tank that will hold oyster shells to create reef structures on which reside a collection of robotic oysters at various stages of their life cycle,” says Rothenberg. “The robotic oysters will respond to an immersive audio system that mimics aquatic acoustics. For example, a mature, adult-sized robotic oyster could close its shell, depending on the soundscape. A baby oyster (spat) may slowly move to another area of ​​the reef.

“The movements and gestures are based on scientific data on how oysters ‘hear’ sound and the resulting responses,” she says.

There will also be a video component to the installation with video projections flowing through various images, including real-time marine traffic data in New York Harbor; a live camera feed from the pool; and hydrodynamic modeling that visualizes water and noise pollution.

“We are currently working on various aspects of the immersive installation which will all be combined,” explains Rothenberg. “For example, the first prototypes of robotic oysters have been created. These are further streamlined to more effectively mimic the behavior of oysters.

“We also collected underwater sounds from several oyster field stations in New York Harbor, which are composed onto a score that will be used to activate the robotic oysters,” she says. “We develop visual tropes that reference the sea, such as using color-coded waves to represent the speed, draft and weight of ships moving through the harbor.”

A prototype of the sound-sensitive oyster was created by UB computer science students Chetan Palker and Ralfy Chettiar under the guidance of Karthik Dantu, associate professor in the Department of Computer Science and Engineering. A demonstration of the prototype took place during the engineering school’s end-of-semester poster sessions in May.

“I really enjoyed the collaboration with Stephanie and the interdisciplinary nature of the project,” says Dantu. “In engineering, we focus on improving the efficiency and performance of things, but artistic endeavors must consider other factors, such as aesthetics, visualization, human appeal and others. .

“That makes this collaboration unique for me and very interesting,” he says. “It’s also one that got me off the beaten path and a welcome change from my usual research.”